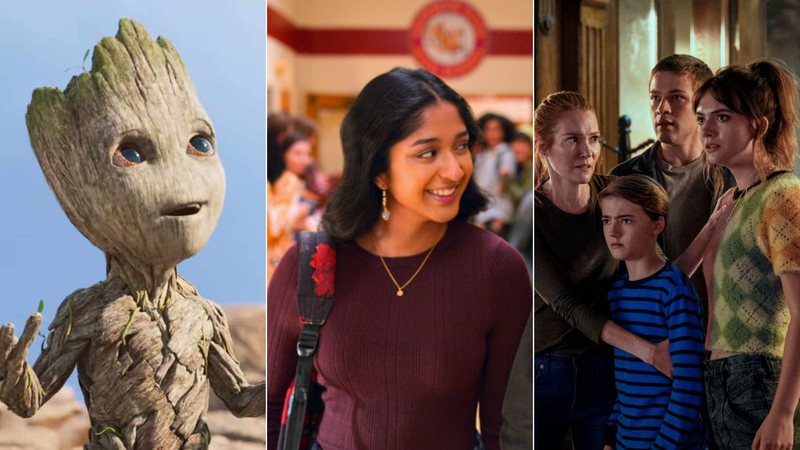 CineBuzz has prepared a list of the main releases in cinemas, TV and streaming

Another week full of releases in theaters and on the main platforms of streaming, like Netflix, Disney+, Star+, Amazon Prime Video and more, is here! And as usual, so you can start choosing what you’re going to watch in the next few days, we’ve prepared a list of this week’s main premieres.

Among the main titles are the new MCU series focused on Guardians of the Galaxy member, “I Am Groot”; the third season of “I Never…”; and the final year of “Locke & Key”, also a Netflix original series.

In the plot, Dr. Nate Samuels (Idris Elba) is a man who recently lost his wife, and decides to take a trip with his daughters to a reservation in South Africa, where he met his wife. But what starts out as a smooth trip turns into a nightmare when they find themselves being chased by a lion. Watch the trailer:

In domestic production, Tone (Lázaro Ramos) sees his life change completely when he becomes a father. Gradually, along with his wife Elisa (Paola Oliveira), he learns the meaning of fatherhood and finds himself taken by a completely different love after the birth of his daughters. Through everyday situations, the film presents a faithful representation of the relationship between parents and children. Watch the trailer:

In the movie, Rachel (Teresa Palmer) is a mother grieving a tragic accident where one of her twins lost his life. To rebuild the family, Anthony (Steve Cree) moves with his wife and their surviving son to the city where he grew up, thousands of kilometers from where they lived. Watch the trailer:

Caco Antibes (Miguel Falabella) has just got out of prison and is back in his apartment in Largo do Arouche, now about to be sold. Therefore, Magda (Marisa Orth), Cassandra (Aracy Balabanian) and Caquinho (Rafael Canedo) are living in the cramped apartment of Ribamar (Tom Cavalcante), in the same building. The situation changes when shard how much Caquinho get involved in transporting gemstones, which can make them rich or send them to jail.

The Netflix documentary series shows Anthony Templet, a man who murdered his own father and never denied it. But the reason is a complex issue, with profound implications that go far beyond the family.

This past year, “the Locke family discovers more magic within Keyhouse, as a new threat – the most dangerous yet – emerges in Matheson with plans of his own for the keys. From Carlton Cuse (Lost, Bates Motel) and Meredith Averill (The Haunting of Hill House), ‘Locke & Key’ is a mystery about love, loss and the unshakable bonds that define family. The series is a television adaptation of Joe Hill and Gabriel Rodriguez’s best-selling comic book series for IDW Entertainment.”, describes the official synopsis. Watch the trailer:

“Indian Wedding” is a reality show dating approach focused on the Indian context where arranged marriages are common. But the series explores questions about local culture from an unusual point of view and shows how relationship dynamics in Hindu culture are not as different as you think.

In 2006, in Argentina, Banco Río was robbed by six thieves. 23 hostages and 300 police officers could not predict that the group would take about 15 million dollars and escape unharmed. This documentary contains revealing interviews about the famous and risky operation.

Every year the Jellicles cat tribe must make a big decision on a special night: choose one of the members to ascend to the Heaviside Layer, a place that promises a better life for all. Each of the cats tells their story to their leader, the old Deuteronomy, in an attempt to be the chosen one.

on death row, Ted Bundy agrees to reveal the details of his crimes, but only to one man. The true story of the complicated relationship that develops between them as the agent delves into the dark and twisted mind of Bundy.

In World War I, two British soldiers are given seemingly impossible orders. In a race against time, they must cross enemy territory and deliver a message that could save 1,600 of their comrades.

Inspired by real moments from the actress and comedian’s childhood Mindy Kaling“I Never…” depicts the complicated modern life of devi (Maitreyi Ramakrishnan), an American teenager, the daughter of Indian parents and an unpopular student at school. After the death of her father, Mohan (Sendhil Ramamurthy), she suffers a great trauma and ends up losing the movement of her legs for a few months. Trying to change your image at school, devi does everything to erase how people saw her before, but nothing works. She dreams of living an intense romance and cliché of teen movies, but her life always seems monotonous and uninteresting. Until one day, she ends up winning the attention of her biggest crush at school, paxton (Darren Barnet), but things end up not going as well as she would like. Furthermore, devi still has to deal with his mother’s strict rules, nalini (Poorna Jagaanathan) who tries to control every step she takes. Watch the trailer:

In “Double Journey”, a working father just wants to provide a good life for his 8-year-old daughter. But his regular job cleaning pools in the San Fernando Valley is just a front for his real source of income: hunting and killing vampires. Watch the trailer:

The new production of the MCU is a series of shorts that follow the little creature from “Guardians of the Galaxy” in new adventures. the path of Baby Groot crosses with that of some characters already known and others still unpublished. Watch the trailer:

Inspired by the bestselling book of the same name by Jon Krakauer and led by the Oscar winner, Dustin Lance Black (“Milk: The Voice of Equality”), “In the Name of Heaven” revolves around the murder of Brenda Wright Lafferty (Daisy Edgar-Jones) and their young daughter in a picturesque suburb of the Salt Lake Valley, Utah, in 1984. As the detective Jeb Pyre (Andrew Garfield) investigates the events that occurred in the family Lafferty, he uncovers hidden truths about the origins of The Church of Jesus Christ of Latter-day Saints and the violent consequences of dogmatic, uncompromising faith. Which Pyre, a devout Mormon, finds it affects even his faith. Watch the trailer:

In the plot set in the 1970s, Gru (Steve Carrell) is growing in the suburbs. A fan of a group of supervillains known as the Vicious 6, the boy hatches a plan to become evil enough to join them. Fortunately, he receives support from his loyal followers, the minions. Together, they exercise their skills as they build their first lair, try out their first weapons, and carry out their first missions. But when the Vicious 6 oust their leader – the legendary fighter wild knuckles – Gru participates in an interview to become its newest member, and unfortunately, it doesn’t go well. Everything gets worse after Gru overcomes them and suddenly, the boy finds himself the mortal enemy of the evil group. He will turn to an unlikely source of guidance, the very wild knuckles, and you’ll find that even supervillains need a little help from their friends. Watch the trailer:

Based on the movie “A Very Special Team”, the series follows a group of women trying to enter the universe of baseball at a time when the sport was only practiced by men. carson shaw (Abbi Jacobson) leads the team and strives to keep the spirit of her teammates alive in the midst of the adversities they live. But in addition to grueling training and fierce championships, these women also live complex personal lives amid forbidden romances and abusive family lives. But they find in each other a strong friendship that helps them overcome any problem. Watch the trailer:

For more than 40 years, the fashion executive Peter Nygard is accused of having attacked women in Canada, the United States and the Bahamas. Today, the supposed list of survivors runs into the thousands. Legally accused in Canada and the United States, Nygard uses every weapon he can to keep his alleged victims silent. Through exclusive interviews, rare archives and never-before-seen footage, this premium 3-part documentary series traces how and why witnesses finally came together to build a case against Nygard.