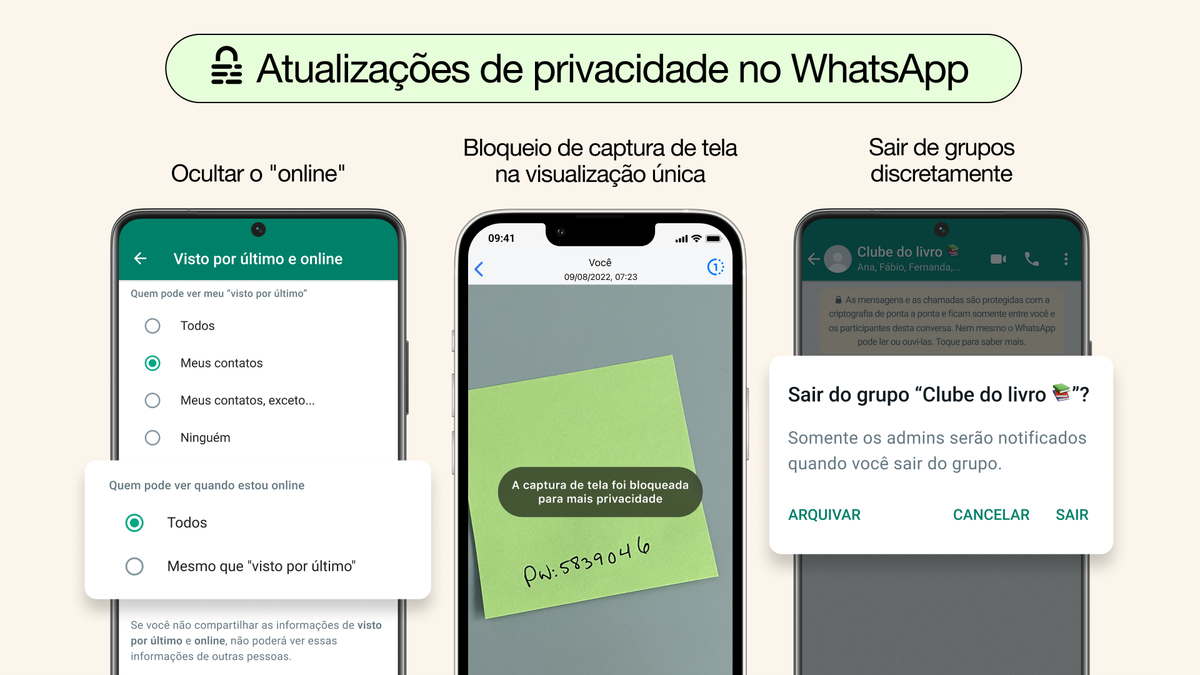 WhatsApp will let you hide that you are ‘online’; see how to do | Technology

WhatsApp announced on Tuesday (9) a feature that allows you to hide the “online” and “last seen” that appear in the accounts, an option long awaited by many users. It will be released gradually and will be available to everyone later this month.

The app will also allow you to leave groups without everyone knowing and block screen captures (print screen) in single view messages. These changes will be activated automatically and there will be no need to change account settings.

How to hide ‘online’ and ‘last seen’ on WhatsApp

Until then, it was not possible to remove WhatsApp’s “online” status: if you opened the application, the warning appeared to all your contacts. It will now be possible to decide who can see this status.

Here’s how to hide “online” from your WhatsApp account:

By hiding the “online” and “last seen” of your account, you will also not be able to see this information on other people’s accounts.

Many users were also hoping for a feature that would allow them to discreetly leave groups. With the WhatsApp update, the notice that someone has left the conversation will only be shown to the group admins.

The change will be released from this Tuesday (9) and can be seen in the warning that the app shows before you leave a group.

If the news has not reached you, the app will only ask if you really want to leave the conversation. If it is available, a window will appear warning that “only admins will be notified when you leave the group”.

WhatsApp also announced that it is testing a screenshot lock on single-view messages, including photos and videos.

The idea is to provide another layer of protection for users to share records when they don’t want them to be available to their contacts forever. The functionality will be released to everyone soon.

Why don’t you show up for me?

WhatsApp usually releases new features little by little, so it is possible that the new features are not available to you as soon as they are announced.

A good practice for receiving new features is to keep the app up to date. This does not guarantee that the changes will appear faster, but rather that you will have a newer version, which is able to receive the new functionality.

Here’s how to update WhatsApp:

Important: if instead of “Update”, the button has the message “Open”, the application is already in the latest version available.

Previous Confusion inside and outside Couto mark the match between Coritiba and Santos
Next Cruzeiro has a star from the 22nd round and five other highlights in the selection; Look