The whale was even hoisted from the river, but on the way to a basin of salt water, he had respiratory problems.

The animal had been seen for the first time in the river on Thursday (4), and in recent days it has been struggling to swim about 80 kilometers from Paris and has refused food provided by professionals trying to save it.

A member of the rescue team assesses a beluga lost in the Seine River, in France, which died during a rescue operation, on August 10, 2022. — Photo: Benoit Tessier/ Reuters

During this morning, a team made up of local authorities and the marine conservation group Sea Shepherd France tried to a risky and unprecedented operation to transfer her, in a refrigerated truck, to a saltwater basin in the port of the Ouistreham canal. There, she would be treated and later returned to the sea, according to the rescue plan.

The whale was even hoisted from the river, and was examined and monitored by veterinarians, but, according to the team, he began to have respiratory problems on the way and did not survive. , according to the mayor of Calvados, the region where the operation was carried out.

Sea Shepherd reported that although the operation was risky, the beluga was malnourished and would not be able to survive in the warm, fresh water of the river. Belugas are typical of Arctic waters but can survive for a while in fresh water.

“Despite an unprecedented rescue operation, we sadly announce the death of the cetacean,” the mayor announced. 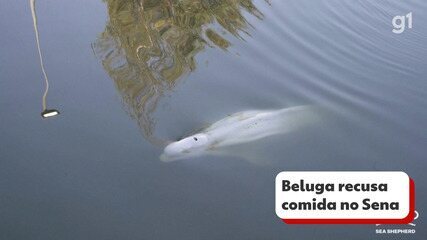 Beluga whale lost in the Seine refuses food from rescuers

Over the course of the week, professionals tried to feed it live trout and squid, but the whale refused any food and was swimming slowly, in addition to showing a lot of weight loss.

Despite being considered a rare episode, this is not the first time that a cetacean has appeared in the Seine River. In May, an orca also in serious condition swam tens of kilometers down the river. Crews tried to guide it back out to sea, but the animal was disoriented and died of natural causes.

In 2018, another beluga was spotted on the River Thames in London.