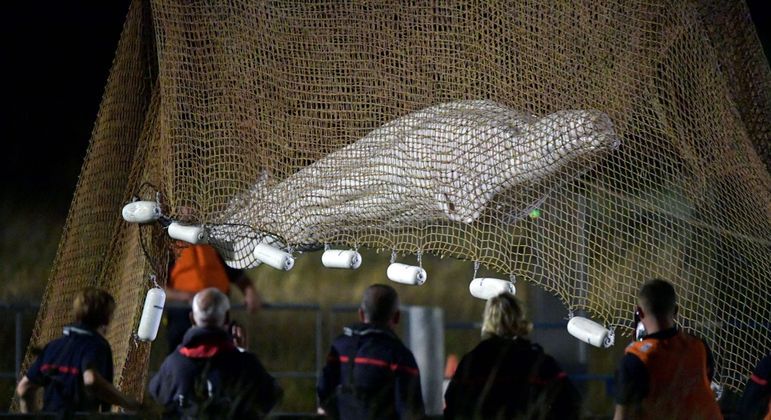 Beluga whale taken from the Seine River, northern France, after being lost for more than a week, died while being transported to a lock where she would receive treatmentannounced the local authorities this Wednesday (10).

“Despite an unprecedented operation to rescue the beluga, we are sad to announce the death of the cetacean,” the city of Calvados said on Twitter, which reported that the whale was euthanized during transport.

In the early hours of Wednesday, a rescue operation managed to remove a lost beluga whale from the water in the Seine River, in the first stage of a complicated mission to return the animal to the sea.


The 24 divers involved in the operation needed six hours to get the cetacean into the net. The beluga was lost in a lock in the town of Saint-Pierre-la-Garenne.

At 4:00 am local time (23:00 GMT on Tuesday), the whale, weighing almost 800 kilograms and in an “alarming” state of health, was hoisted into the net, propelled by a crane and placed on a boat, where it received veterinary care.

For several minutes of uncertainty, the imposing cetacean remained suspended in the air, waving its body four meters above the rescue workers.


The animal should immediately be placed in a refrigerated truck that would transport it to the coast if tests determined that it was fit to make the trip, said the secretary general of the Eure prefecture, Isabelle Dorliat-Puzet.

“We are awaiting the results of the blood test and ultrasound, and depending on the result, it will be decided whether or not it can be transported to sea,” Dorliat-Puzet said.

“We can see that it is a male, that he is very underweight and that he has some injuries,” he added.

She said her intention was to take the beluga out to sea and release it as far from shore as possible.

Observed on August 2 in the Seine River, the beluga was held since Friday in a lock located 70 km from Paris and 130 km from the mouth.

The whale lost a lot of weight and appeared to be sick, but its condition was “satisfactory”, Isabelle Brasseur, from the Marineland marine animal park in southern France, the largest in Europe, told AFP.


It is not yet known how the animal arrived at the site, as belugas live in the cold waters of the Arctic and, although they descend south in autumn (northern hemisphere), they never venture that far.

The beluga’s plight has generated great interest both inside and outside France, and several foundations and associations have donated to help save it.

Isabelle Brasseur explained that this was an “unusual” operation from the beginning, because vehicles cannot access the banks of the Seine on this stretch, and all material “has to be transported by hand”.

In May, an orca was trapped in the same river. Operations to save it failed and the animal died of starvation.

According to France’s Pelagis Observatory, which specializes in marine mammals, the closest population of belugas is found in the Svalbard archipelago in northern Norway, 3,000 km from the Seine.

According to this institution, this is the second time that the presence of a beluga has been recorded in France. The first was seen in the Loire River, in a fisherman’s nets, in 1948.

Previous Vivo increases the franchise for Selfie, Family and Control plans at no additional cost
Next Bahia Social Vip – The best of Bahia in the spotlight Film about the singer Maria Bethânia hits theaters on September 1st