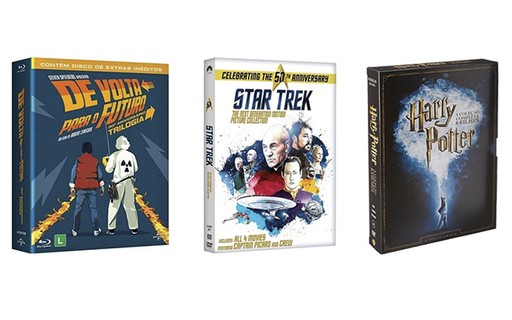 Movie collections can be a good alternative to gift on Father’s Day and enjoy with the whole family. The boxes are usually collectors’ items, as they bring complete sagas and special editions, with commemorative covers and extra content. The list below brings together seven boxes suitable for parents of all generations and also for those who do not want to depend on streaming services such as Netflix, Prime Video, HBO Max and Disney+.

Among the copies there are options for horror, such as the trilogy of Uma Noite Alucinante, a hit from the 1980s, available on DVD. for about BRL 93. It is also possible to find collections with more recent films, such as the saga of the wizard Harry Potter, which is for sale on DVD for prices from BRL 69 and brings together the eight films. Check out the complete list below.

1. Harry Potter – from R$69
Harry Potter (portrayed by Daniel Radcliffe) is a ten-year-old orphan boy who lives with his mistreating uncles. Behold, one day the boy starts to receive letters inviting him to study at Hogwarts, a famous school specializing in training young wizards. However, his uncles do not allow Harry to read the letters and begin to isolate the boy even more from the world, until Hagrid (Robbie Coltrane), the Hogwarts gamekeeper, goes to Harry’s uncles’ hideout and takes him to the school. From then on, the young man enters a magical and completely unknown universe and begins to live adventures alongside new friends Ron Weasley (Rupert Grint) and Hermione Granger (Emma Watson).

This box brings together the eight films of the saga. Discs are divided into two DVD cases and come with a protective sleeve. The complete collection contains the feature films in their entirety, all with the original audio in English and dubbing and subtitles in Portuguese. On Amazon, the product is rated 4.8 out of 5 stars, and buyers highlight the quality of the box, but some report receiving the discs with scratches. The set can be purchased for prices from BRL 69.

2. DC Collection – from BRL 89
The DC box set features the seven Justice League films, which tell the origin story of heroes like Superman, Batman and Wonder Woman, as well as how they met and formed the league. The collection includes the following titles: The Man of Steel, Batman v Superman: Dawn of Justice, Wonder Woman, Suicide Squad, Justice League, Aquaman and Shazam!. The cast includes actors such as Ben Affleck, Henry Cavill, Amy Adams, Gal Gadot and Jason Momoa.

3. A Mind-blowing Night – from R$93
A Crazy Night is a horror classic from the 80’s. The story is about a group of five friends who decide to spend a weekend in an isolated house where they find a book, which when read aloud, frees the spirit of demonic dead. . The work stars Bruce Campbell, Ellen Sandweiss, Betsy Baker and is directed by filmmaker Sam Raimi.

The box comes with a protective sleeve and consists of six DVDs, three of them with the films and the others with extra content from each of the feature films. Both audio and subtitles are accessible in Portuguese, English and Spanish. The product is rated 4.4 out of 5 stars on Amazon, and buyers highlight the picture and sound quality, but some say they received the discs with scratches. The collection is sold for approximately BRL 93.

4. Star Trek – from R$178
The Star Trek box set is a special commemoration of the series’ 50th anniversary. Set in the 23rd century, the sitcom follows the adventures of the crew of the starship USS Enterprise, commanded by Captain James T. Kirk (William Shatner), First Commanding Officer Spock (Leonard Nimoy) and Chief Medical Officer Leonard McCoy (DeForest Kelley). ). The ship’s crew is on a mission to find new worlds, life forms and civilizations.

The collection comes with four DVDs and a protective sleeve, themed with art from the 50th anniversary edition of the saga. Audio is available in Portuguese, Spanish and French, and subtitles can be viewed in Spanish, English, French, Portuguese. The product is rated 4.8 out of 5 stars on Amazon, and many buyers praise the quality of the remaster. On the other hand, some report freezing problems on some disks. For the acquisition, it is possible to find the box by prices from BRL 178.

5. Back to the Future – from BRL 199
The Back to the Future trilogy collection is a special commemoration of the 30th anniversary of the release of the first film. This cinematic classic tells the story of young Marty McFly (Michael J. Fox), a teenager from California who accidentally sets off a time machine, built on a car modified by scientist Doc Brown (Christopher Lloyd).

The box comes with a birthday-themed protective glove, in addition to bringing together the three films in the franchise and another disc with never-before-seen extras. Audio and subtitles are available in Spanish, English and Portuguese. The product has 5 out of 5 stars on Amazon, but up to the date of publication of this article, there were no negative or positive reviews about the collection. Feature films are offered by from BRL 199.

6. Star Wars – from R$219
Star Wars is a film saga that began in the 1970s and features young Luke Skywalker (Mark Hamill) as its protagonist. After finding a message left by Princess Leia Organa (Carrie Fisher) on the robot R2-D2, the boy reunites with Jedi Obi-Wan Kenobi (Alec Guinness) and sets out on a journey to destroy the death star.

The Star Wars collection offers the nine films of the saga on DVD, which can be ideal for old fans and also for those who want to know the franchise. The videos have audio in Portuguese and English, as well as subtitles in Portuguese, English and Spanish. The box is accessible by values ​​close to BRL 219.

7. Avengers – from R$719
The Avengers box set features the four films of the series in Blu-ray format, they are: The Avengers, Avengers: Age of Ultron, Avengers: Infinity War and Avengers: Endgame. In all, the collection has nine discs, comes with a protective glove and has art manuals for each feature film. It has audio and subtitles in Portuguese.

Transparency note: Amazon and Monet maintain a commercial partnership. By clicking on the store link, Monet can earn a share of sales or other compensation. The prices mentioned may vary and the availability of the products is subject to stocks. The values ​​indicated in the text refer to the month of August 2022.