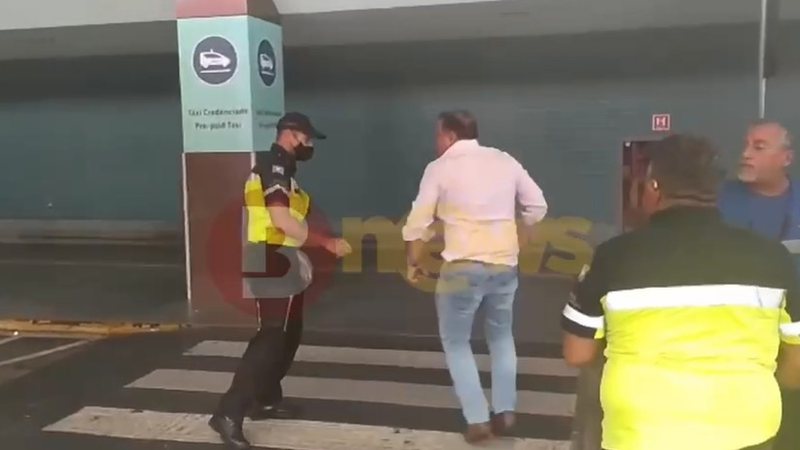 To BNews, Bacelar alleges abuse of authority; server accused parliamentarian of parking in an irregular place

Deputy João Carlos Bacelar (PL) was caught in a discussion with agents of the Salvador Transit Superintendence (Transalvador) in the arrivals area of ​​the Salvador International Airport, this Wednesday (10). The agency claims that the deputy parked in the prohibited place, while he accuses professionals of abuse of authority.

In the video, it is possible to notice the moment in which the deputy argues with the traffic agents and even takes the cell phone from one of them. To BNews, Bacelar said that there was abuse of authority by the municipal agent. He said that the disagreement started when he asked the driver of the car he was going to take to pull over a little behind a taxi. The deputy also said that he made the request in view of the lack of vacancies and “disorganization” of traffic, a scenario he believes to be common when coming to Salvador.

As he was loading his bags into the vehicle, Bacelar said he noticed the Transalvador agent filming and fining the car. After observing the situation, he went to the professional and questioned the situation.

“I land at least two or three times at Salvador airport. And as it was crowded, full of vans and taxis, as there is no orderliness in the flow of vehicles, I called the driver to pull over. When he pulled over, I got into the cab and put my suitcase in the back of the car. That’s when I noticed that I had an agent filming and ticketing my car. I asked what the infraction was, that the driver stopped just for my boarding, a matter of 30 seconds. Then he said he can’t stop there. I asked him to stop filming, that’s when the other agents arrived and another one came filming”, said João Carlos Bacelar.

The deputy acknowledged that he took the cell phone of one of the Transalvador agents and returned it to a military police officer. He also said that he called Mayor Bruno Reis (UB), who was at an event with ACM Neto on the morning of this Wednesday (10), and asked for measures to organize the traffic at the arrivals at Salvador International Airport.

In a note to BNews, Transalvador stated that the action of the agency’s agents in filming is legal, in addition to giving its version of what happened. Read in full:

“The Salvador Traffic Superintendence (Transalvador) clarifies that the vehicle shown in the images was parked in an irregular location, on the crosswalk. Faced with this situation, agents of the Municipal Mobility Department (Semob) asked the driver to position the vehicle in another nearby location. The driver of the vehicle accepted the suggestion of the municipal server. However, the passenger of the car, who appears dressed in a dress shirt, went over to the Semob agent, yelling at his driver that he was not supposed to remove the vehicle.

Transalvador agents, seeing the situation, provided support to their colleague. As the images show, at this moment, the passenger, in addition to taking the Transport agent’s cell phone, physically assaulted the Transalvador agent, with two slaps on the chest.

It should be noted that the use of cell phones, as well as body cameras, is common in the work of traffic and transport agents. This equipment is used to deter aggressions like this, as well as record traffic violations. Transalvador and Semob repudiate any form of aggression against their agents while on duty and will provide support to world servers,” the note reads.

Previous Daronco confuses players in a “clear” bid and misses a goal scorer in Ponte x Vasco’s summary; video | Brazilian series b
Next Dolce&Gabbana: the magic of the Alta Sartoria parade, in Sicily – GQ