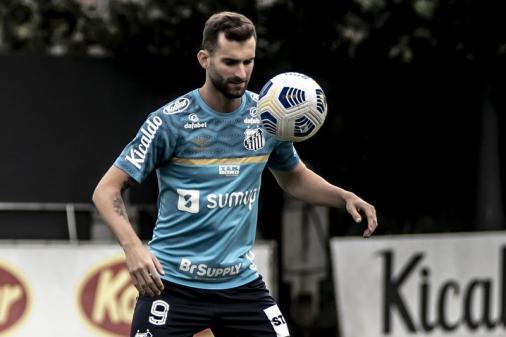 Santos accepts the proposal and directs the departure of Léo Baptistão to Almería, in Spain

Striker Leo Baptistão is leaving the saints. Peixe accepted the proposal from Almería, from Spain, and depends only on the medical exams in the European team to finalize the negotiation. The values ​​are around R$ 8 million reais.

Recently, Peixe refused a proposal from the same club for Baptistão, claiming that low values ​​for an important player to the group not only on the field, but also as a leadership. Now, with better numbers, the negotiation was well regarded by the parties.

Coach Lisca revealed that he had talked to striker Léo Baptistão about a possible departure. The striker was out of this Monday’s clash, against Coritiba, for the Brazilian Championship. This Tuesday, the former Santos shirt 92 said goodbye to his teammates at CT Rei Pelé.

– Maybe he can (come back). I would love to. He came to me along with John at the same time. Leo’s positioning is a little different. He said he doesn’t have a sangria untied to leave Santos. He said he fought to come here. The family is doing very well. He left (from the team) for tactical reasons, not technical reasons. He gives me a very strong option – said the coach, in a press conference after the match.

Léo Baptistão arrived at Santos in August 2021, but failed to score. He had to deal with several injuries that took him away from the fields at important moments for Peixe last season. He suffered a hamstring injury in his left calf in a 3–1 loss to Atlético-MG on 13 October.

In 2022, it was also low in the first games, and again it delayed the player’s plans. Over time and with the help of former Santos coach Fabián Bustos, he managed to score a streak as a starter and got rid of injuries. In all, he took the field in 38 games, scored seven goals and provided three assists.