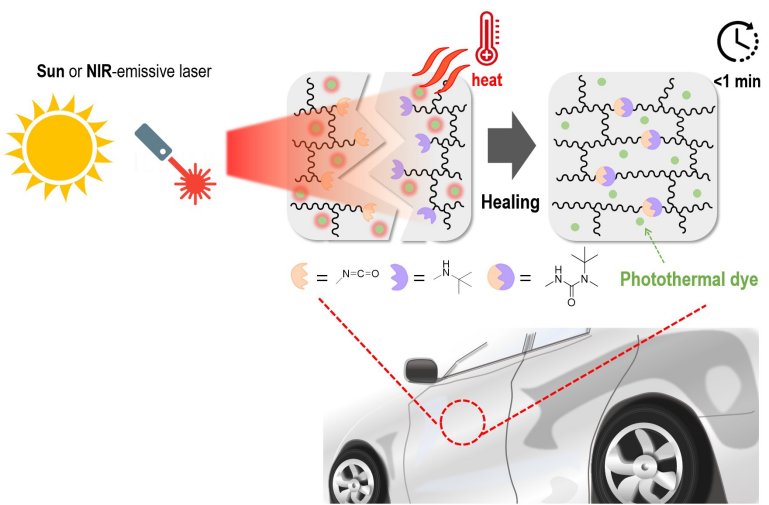 Scratches on car paint disappear in the sun in 30 minutes

Korean researchers have developed a clear coating material, similar to a varnish, that heals itself from scratches and scratches, just by being exposed to the sun.

The material is also durable enough to speak of in practical applications, with performance similar to that of protective coatings commercially available today.

It self-heals from scratches and cracks in about 30 minutes when exposed to sunlight – particularly to the near-infrared component, in the wavelength range of 1000 to 1100 nm. When exposed to strong focused light, the self-repair took less than 30 seconds.

When sunlight is absorbed by the material, its temperature increases as infrared energy is converted into thermal energy. The self-healing of a surface scratch is achieved by the dissociation and recombination of chemical bonds in the polymer backbone.

Da Hae Son and colleagues at the Chemical Technology Research Institute of Korea started with a commercial coating varnish, to which they added a dynamic chemical bond (impeded urea structure) that can repeat the decomposition and recombination of the polymer structure.

Finally, a transparent photothermal dye was added, so that dynamic chemical bonding could actively take place after exposure to sunlight.

The tests were done on a miniature, which was coated, scratched and then exposed to the sun, self-repairing in half an hour.
[Imagem: KRICT]

Although self-healing functions have already been implemented using photothermal dyes, previous demonstrations have typically relied on inorganic materials, which are difficult to apply industrially, since the coating material must be transparent so as not to affect the color of the vehicle or other object in the whichever is applied.

“The technology we developed is a technology platform that synthesizes self-healing coating materials using inexpensive commercial polymeric materials and photothermal dyes. We expect it to be widely used not only in automotive varnishes, but also in various other applications,” said Professor Jin Chul Kim.

Among these other applications, the researcher mentions consumer objects, such as cell phones and notebooks, and coatings and paints for construction materials.