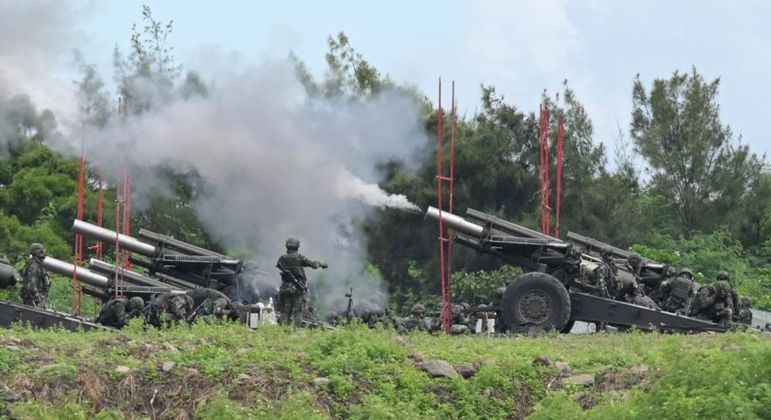 Taiwan began on Tuesday (9) a simulation of defending the island with live artillery ammunition after the large military maneuvers carried out by China around its territory, while accusing Beijing of preparing an invasion.

Lou Woei-jye, a spokesman for Taiwan’s Eighth Army Corps, confirmed the start of exercises in southern Pingtung County. The maneuvers lasted just under an hour.

After the last round of fire, Taiwanese soldiers shouted “mission accomplished”.

China carried out the biggest military exercises in history around Taiwan last week, a response to the visit to the island of the Speaker of the United States House of Representatives, Nancy Pelosithe top Washington official to travel to the town in decades.

“China’s real intention is to change the status quo in the Taiwan Strait and across the region,” Wu said.

The Chinese Armed Forces announced the continuation of the maneuvers, with air and naval units, this Tuesday.

The People’s Liberation Army Eastern Command said in a statement that it is carrying out training exercises around the island, focused on joint blockades and joint support operations.”

Taiwan, a self-governing island, has lived for decades with the constant threat of an invasion from China, which considers the territory a province of the country that must someday be regained, including by force if necessary.

The Taiwanese maneuvers, which will also take place on Thursday (11), will include the mobilization of hundreds of troops and 40 shells, the army said.

Lou said on Monday that the exercises were already scheduled and were not a response to China’s maneuvers.

The democratically-governed island often organizes simulations of a Chinese invasion. Last month, Taiwan trained how to avoid attacks from the sea during large exercises.

The anti-landing drills come after China extended sea and air maneuvers around Taiwan on Monday, although the US government said it did not expect any escalation from Beijing.

“I’m not worried, but I’m worried that they’re making such a fuss. But I don’t think they’re going to do anything more than what they’re doing,” said President Joe Biden.

Taipei insists that no Chinese planes or ships entered its territorial waters (up to 12 nautical miles from the coast) during the Beijing maneuvers.

But the Chinese army released a video last week of a pilot filming the coastline and mountains from his cockpit, to show how he approached the island.

Chinese media claimed that ballistic missiles were fired over the Taiwanese capital during the exercises.

The scale and intensity of Beijing’s maneuvers, as well as the suspension of its cooperation with Washington in areas such as climate or defense, have provoked outrage in the United States and other democracies.

Analysts commented that the Chinese exercises showed how Beijing’s increasingly daring army could carry out an exhaustive blockade against the island.

China’s government defended the country’s attitude as “firm, forceful and appropriate” to the US provocation.

“We only send a warning to the perpetrators,” said Chinese Foreign Minister Wang Wenbin, before promising that the country would “firmly crush the illusion of the Taiwanese authorities of gaining independence through the United States.”

Previous Santos studies the loan contract of Soteldo, from Tigres-MEX
Next “Impressive, I’ve never seen anything like it”; doctor gets real about Luan in São Paulo