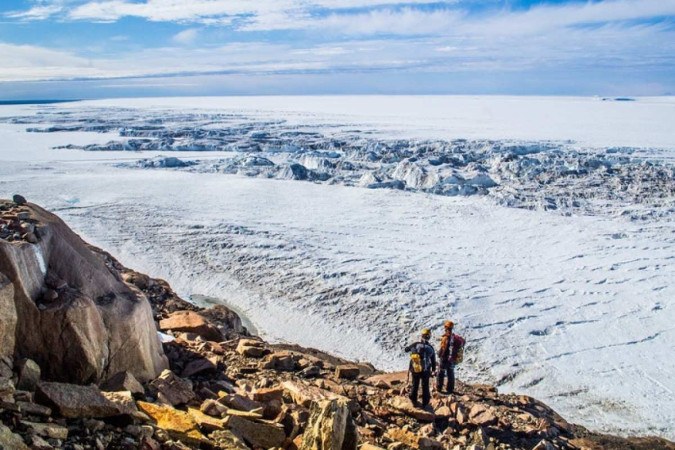 Global warming begins to melt the Eais, the largest ice sheet on Earth

In the southernmost region of the planet, there is a sleeping ice giant. It has remained so for the last few thousand years and, until recently, it was believed that nothing would wake you up. However, scientists have discovered that he is awakening. Global warming begins to wake up the largest icy blanket on the planet. If nothing is done to prevent the temperature increase from exceeding 2ºC, as defined by the Paris Agreement, 52m of frozen water could melt. The worldwide consequence would be catastrophic.

A study published yesterday in the journal Nature confirms what had already been seen in 2020: the East Antarctic Ice Sheet (Eais), in the eastern part of the frozen continent, is suffering more disturbance than previously thought. Now, though, researchers have calculated how the melting would impact sea-level rise, a problem that is already underway due to the melting of other glaciers. By 2300, the dismantling of the giant would result in an increase in volume of between 1.5m and 3m in the oceans. The situation in 2500 would be even worse: 5m more. Among other consequences, islands and entire countries would be swallowed up.

The Eais comprises 80% of all the ice on the planet. “It’s so big that in some parts it’s as thick as 4km,” says Chris Stokes, a professor at the University of Durham in the UK and lead author of the study. If, hypothetically, the mantle melted overnight, the sea would dawn 52m deeper. “Of course, that’s not going to happen,” Stokes clarifies. But continued thawing driven by rising temperatures will add more water than the coasts of continents can handle.

“We were interested in how stable Eais is because, for a long time, scientists believed that, compared to West Antarctica and Greenland, there would be greater stability. So maybe we wouldn’t have to worry so much about it in a warming scenario. “, says the researcher. “But in the study, we looked at times in the past when the weather was just a little warmer than it is now, and we saw the reaction of the Eais. We found that it retracted, and in some cases that retraction was dramatic, contributing to an increase at sea level from 5m to 10m.”

The lesson of the past is that the ice sheet is not as stable as thought, says Stokes. In addition, the researchers analyzed satellite observations that proved: in recent decades, there has been a visible decrease in the ice cap. “Here we have some alarming signs because while most of the ice sheet appears stable, some parts are shrinking and thinning, contributing to sea level rise as much as West Antarctica and Greenland.” Therefore, even if only some parts of the Eais turn to water, this will be enough to add volume to the oceans.

According to Stokes, one of the most important conclusions of the study is that the fate of the icy giant is not yet defined. Computer simulations have shown that, in scenarios of low emission of greenhouse gases, which make the temperature rise, the Eais will probably remain intact. For this, it is necessary to achieve the goals defined in the Paris Agreement in 2015: limiting warming to 2ºC and, preferably, 1.5ºC, by the end of the century, based on pre-industrial levels.

The problem is that, according to the World Meteorological Organization, a United Nations body, the current pace of emissions points to a scenario of increase between 2.5ºC and 3ºC. Since the beginning of industrialization, the globe has been 1.1ºC warmer, according to the Intergovernmental Panel on Climate Change (IPCC). “Achieving and strengthening our commitments to the Paris Agreement would not only protect the world’s largest ice sheet, but also slow the melting of other major ice sheets, such as Greenland and West Antarctica, which are more vulnerable to global warming.” , highlighted, in a note, Nerilie Abram, from the National University of Antarctica in Canberra (Australia) and co-author of the article.

The East Antarctic Ice Sheet is the largest mass of ice on Earth, containing more than 50m of sea level equivalent. Most scientists expected and assumed that it is stable. This study carefully analyzes how Eais behaved in past warm periods and shows what the models say will happen in the future. The good news is that if we maintain the 2ºC of global warming that the Paris agreement promises, sea level rise due to (melting) the East Antarctic ice sheet should be modest. However, if greenhouse gas emissions are not brought under control, there is a risk that even the very cold Eais will begin to recede and could contribute many meters of sea level rise in the coming centuries. The study emphasizes that keeping emissions under control now can prevent a disastrous sea level rise for future generations.”

Eric Wolff, a climate researcher at the University of Cambridge, UK

Simultaneous events of extreme heat and drought can have side effects in a variety of areas, from health to the economy, according to researchers at the University of Zurich in Switzerland. In an article published in the journal Plos, the scientists evaluated the combination of phenomena such as high temperature waves, water shortages and forest fires in Europe, Australia and Africa, which occurred in the last 20 years, and say that, in addition to intensifying efforts and investments in adapting to this new reality, intersectoral and, increasingly, global cooperation will be necessary.

The researchers analyzed eight extreme heat and drought events on three continents. In addition to examining the direct and indirect consequences for various sectors and systems, they studied the impact of responses to phenomena. “Financial losses, for example, can be substantial,” says Laura Niggli, the study’s first author. In the 2019/2020 Australian bushfires, losses amounted to approximately A$100 billion, which equates to more than 5% of Australia’s GDP.

The researchers argue that, in the future, risk assessment should not only take into account the consequences of extreme events in individual sectors, but should systematically consider the interconnection. “This is especially important as we are likely to see unprecedented extreme events combined with cascading effects that exceed all historical cases. These effects need to be carefully analyzed to support the design of adaptive and reactive measures”, says the professor of geography at Christian Huggel University, who led the study.