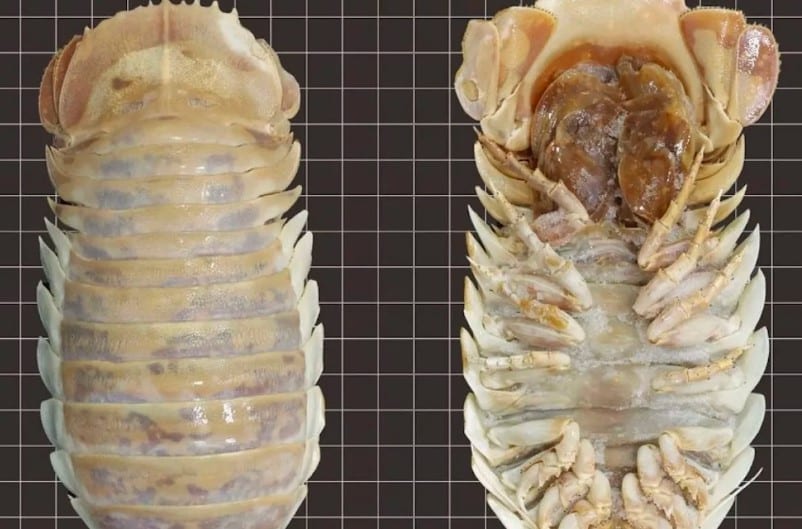 A new species of giant crustacean (25.4 cm) has been discovered 2,500 feet underground off the coast of Mexico’s Yucatan Peninsula, at the site where it is estimated that 66 million years ago the asteroid that decimated the dinosaurs fell in a large mass extinction

Named Bathynomus yucatanensis, the animal has a yellow shell and is a fine example of the giant creatures that live in the ocean. Most isopods tend to measure less than 10 millimeters in length.

This species of crustacean inhabits the deepest reaches of the ocean, which are rarely explored. Among its aquatic family members are crabs, shrimp and lobsters. In the terrestrial environment, there are woodlice, pillbugs and roly-polys, which feed on decaying matter. Although these animals look scary, they are completely harmless to humans.

When this species was found, scientists thought it was a variation of either B. giganteus or B. maxeyorum. However, an in-depth examination revealed that this new species has unique characteristics. One of the most outstanding morphological evidences is the mottled coloration of the shell, in contrast to the grayer tone of the carapace of its relatives.

The study’s lead author, Dr. Ming-Chih Huang, from the National University of Tainan, Taiwan, said: “B. yucatanensis is morphologically distinct from both B. giganteus and B. maxeyorum.” This difference was noticed after the identification of different sequences of two of the genes that resulted in changes in morphology and originated a new species.

The difference between the species of crustaceans is important

Another discovery made by the researchers is that B.giganteus and B. yucatenensis are very close relatives, which indicates that they had a common ancestor. The study’s author states that “it is increasingly evident that Bathynomus species can be extremely similar in overall appearance.” However, he warns of a “long history of misidentification of species in the genus”.

Another warning made by researcher Huang is about the implications that the distinctions between species have for the conservation of these animals, as “there may be other undiscovered bathynomus in the tropical western Atlantic”, and “some species with commercial potential have become targets of deep sea trawl fisheries”.