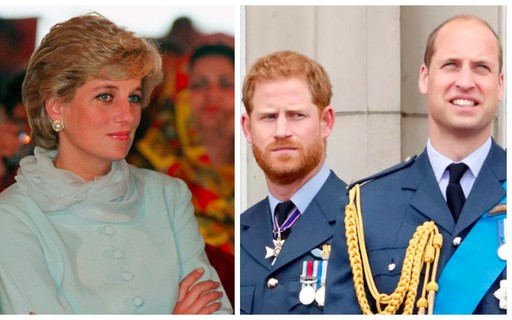 Princes William and Harry are being kept in the dark about the production of a British documentary around the “real cause” of the death of their mother Princess Diana (1961-1997). The filming of the work was reported by the website of the British newspaper Daily Express. According to the publication, the project’s producers are committed to keeping royalty as far away from the documentary as possible.

Scheduled for release at the end of August, the documentary was called ‘Investigating Diana: Death in Paris’. The focus of the work will be the car accident that resulted in the death of the mother of the princes in the French capital in 1997. According to the Daily Express, William and Harry were not approached to speak in the production.

Divided into four episodes, the production promises to “expose for the first time in full” the investigations of French and English authorities into Diana’s death. The producers also added that the documentary will “explore how the two investigations struggled to discern facts from speculation.”

“Speculations about the ‘real causes’ of Diana’s death became one of the first viral speculations in the early days of the internet,” one of the film’s producers, Henry Singer, told the British daily. “Powerful individuals, the press and the internet created and fueled conspiracy theories that were superimposed on the facts and put the truth in check.”

Princes William and Harry have yet to publicly comment on the latest production focused on their mother’s life. At the time of her death, Diana was in a relationship with Egyptian businessman Dodi Al-Fayed, who also died in the same car accident in Paris. Recently, Diana was played in the cinema by actress Kristen Stewart in the drama ‘Spencer’ (2021). Watch the production trailer: