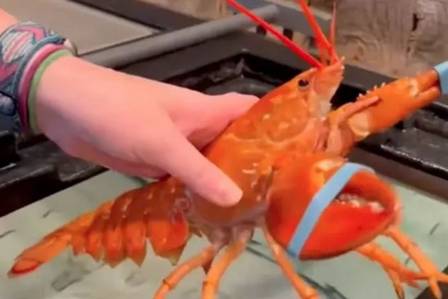 Rare lobster saved from pan at last minute in restaurant

One very rare orange lobster escaped being cooked alive at a Red Lobster restaurant in Meridian (Mississippi, USA) after kitchen staff realized it was a different specimen, found once every 30 million.

The crustacean, which was nicknamed Biscuitit is surprisingly the second to be shipped to Red Lobster in two weeks — leading experts to suggest there may be a resurgence of the lobster type.

The first orange lobster to be found was at a Red Lobster in Hollywood (Florida, USA) last month. She was baptized cheddar. The second came from the same region. Jared Durrett studies lobsters at Ripley’s Aquarium in Myrtle Beach (South Carolina, USA), and told the franchise’s management that the two captures indicate that there is something in the environment that is changing the lobsters.

“Orange lobsters are uncommon, but perhaps not as rare as we thought. Lobsters get their color from the pigments they ingest in their diet. If these orange lobsters are being caught in the same region, perhaps their localized diet contains a pigment that, when combined with the lobster genetics creates the orange coloring we are seeing. We plan to delve deeper into this and study the reasons why this abnormality is occurring more frequently. Our partnership with Red Lobster will allow us to capture data from fishermen, which we normally don’t is easy to obtain due to confidentiality”he explained, according to “Global News”.

“On the rare occasions when we receive a lobster like Biscuit, we have to ask why”said Nicole Bott, Director of Communications at Red Lobster. “We are hearing from our fishermen in the area where Cheddar and Biscuit were caught that they are seeing a lot of orange lobsters this time of year. This seems to indicate that the coloration comes from a different food source. We are excited to support Ripley’s research. and learn more about our changing lobster populations”she concluded.

Previous Atlético decides to ‘open the pocket’ and prepares hat on Leila Pereira for signing a weight from Germany
Next Montado, the most expensive and innovative nature film made in Portugal, premieres today