Vasco blamed Ponte Preta’s lack of safety planning for the fight between the fans, in this Tuesday’s game, at Moisés Lucarelli. The confusion occurred right at the beginning of the match, and the game was paralyzed for eight minutes. One fan was injured. 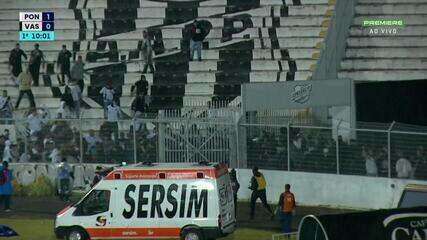 Fans face each other in Ponte Preta vs Vasco

In a note, Vasco treats as “inadmissible” the lack of a safety device to guarantee the separation and safety of fans. The club found that there was not an adequate barrier to separate the fans, which, therefore, resulted in the confrontation between the teams’ fans, after the gate was breached.

The club also noted the lack of private security and the absence of military police between the two fans. There was also turmoil after the game when security protocols were not followed. Vasco’s fans, for example, were immediately released after the final whistle. Generally, local and visiting fans leave the stadium in an organized manner at different times.

Vasco also stressed that the 2,000 tickets available to their fans were sold in advance, and there was no adequate planning for the situation.

Club de Regatas Vasco da Gama comes to the public to regret the serious incidents that occurred on Tuesday night during the match AA Ponte Preta x CR Vasco da Gama, valid for the 23rd round of the Campeonato Brasileiro Série B.

The 2,000 tickets destined for our fans were sold in advance, which should have led to adequate operational and security planning for the match, which clearly did not happen.

The Military Police of the State of São Paulo correctly escorted the buses with Vasco fans from their arrival in Campinas to the stadium and repelled the attempt of hostile approach by the local fans to the access area of ​​the visiting fans in the external area of ​​the stadium. The departure of the stadium took place in a disorderly manner, without the usual security protocols of the host being observed, and forced the Military Police to act again to prevent the hostile approach of local fans from the evacuation area of ​​the visiting fans.

Unfortunately, what was seen during the first half of the match was due to the lack of police and private security allocated in the inner area of ​​the stadium to isolate the visiting sector from the local fans. After Ponte Preta’s first goal, hostilities began when the gate of the grid that separated the two sectors was breached, from the local area to the visiting area, starting a regrettable conflict, which was only paralyzed with the arrival of the police.

The lack of a security device to guarantee the separation and safety of local and visiting fans verified last night at the Moisés Lucarelli stadium is inadmissible. In all the games in which Vasco da Gama plays as a visitor this season, their fans have filled the sectors reserved for them, with no record of incidents.

Club de Regatas Vasco da Gama repudiates any act of violence, by anyone, and makes itself available to the authorities and CBF to collaborate to clarify the regrettable incidents that occurred at Moisés Lucarelli stadium and prevent them from happening again.