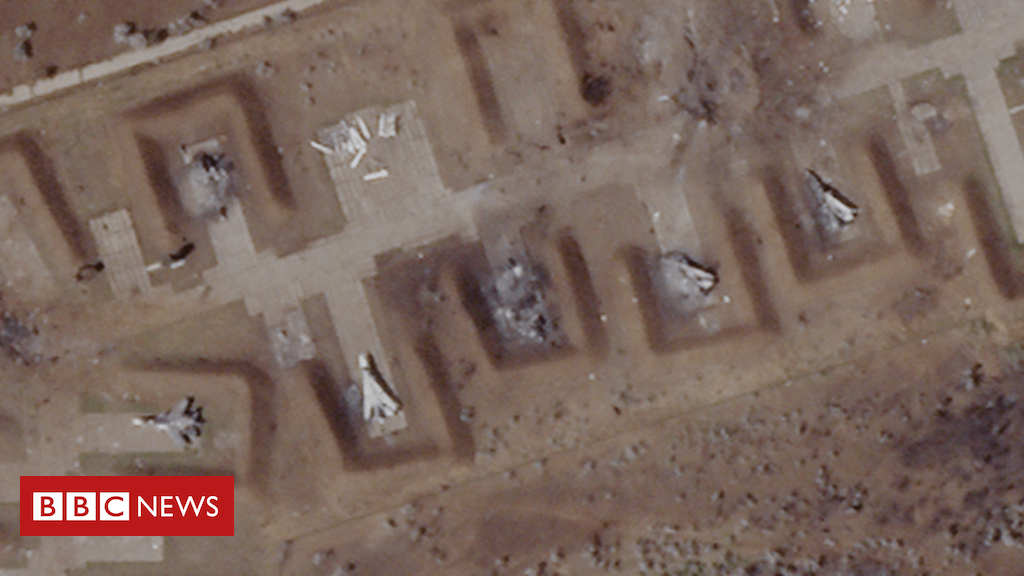 War in Ukraine: Satellite images showing damage from possible air strike on Russian base in Crimea

Satellite images show several Russian warplanes destroyed and other damage at a Crimean air base following explosions earlier this week.

The Saky base in Russian-controlled western Crimea appears to have been attacked on Tuesday, resulting in the death of one person.

Ukraine has not claimed responsibility for the act – but there is evidence that it was an attack.

The images from Planet Labs, an American company that makes maps and observes aerial images, show large areas of land scorched by fires that broke out after the explosions.

The base’s main runways appear to be intact, but at least eight aircraft appear to be damaged and destroyed, with several craters clearly visible.

Most of them are in a specific area of ​​the base with a large number of planes parked outdoors — far from the protection of the hangars.

Before and after satellite images:

Before and after images taken by Planet Labs are the first independent confirmation that the base may have been damaged. Until now, there were few details about the extent of the explosions’ impact.

But it is still unclear how the base was damaged or why.

Russia insists the explosions were caused by ammunition exploding in a store because of disregard for fire safety rules.

Ukraine has not claimed responsibility for the act — and its defense minister has suggested that Russian soldiers may have unintentionally caused the damage.

“I think the Russian military at this airbase broke a very simple rule: don’t smoke in dangerous places,” said Oleksiy Reznikov. “That’s it.”

The Ukrainian Air Force said about a dozen Russian warplanes were destroyed, although Russia denied that any aircraft were damaged. These new images suggest this is not true.

UK Defense Minister Ben Wallace suggested that the fact that there are two separate explosions indicates that this is an attack rather than an accident, which would make the denial by both sides part of a disinformation tactic, typical of military confrontations.

Wallace also defended Ukraine’s right to attack Crimea. “It is absolutely legitimate for Ukraine to use lethal force if necessary … to not only regain its territory but also to repel its invader,” he told the BBC.

Any attack by Ukraine inside Crimea would be seen as an escalation of the war. Russia issued a warning last month. Former President Dmitry Medvedev said “Judgment Day will come instantly” if Ukraine attacks Crimea.

Crimea is internationally recognized as part of Ukraine — but the Black Sea peninsula was annexed by Russia in 2014. Many Ukrainians see this as the start of war with Russia.

After Tuesday’s blasts, President Volodymyr Zelensky spoke in his evening speech on Crimea and suggested that Ukraine must retake the peninsula before the war ends.

Russia annexed Crimea in March 2014 after the territory — which has a Russian-speaking majority — voted to join Russia in a referendum that the global community considers illegal.

The vote was hastily organized after unidentified Russian troops took control of several strategic locations around the peninsula.

The annexation of Russia came after Ukraine’s Russian-backed president was ousted after months of pro-European protests.

On February 24 of this year — eight years after the annexation of Crimea — Moscow launched a full-scale invasion of Ukraine, using Crimea as a platform to move Russian troops into Ukrainian territory.