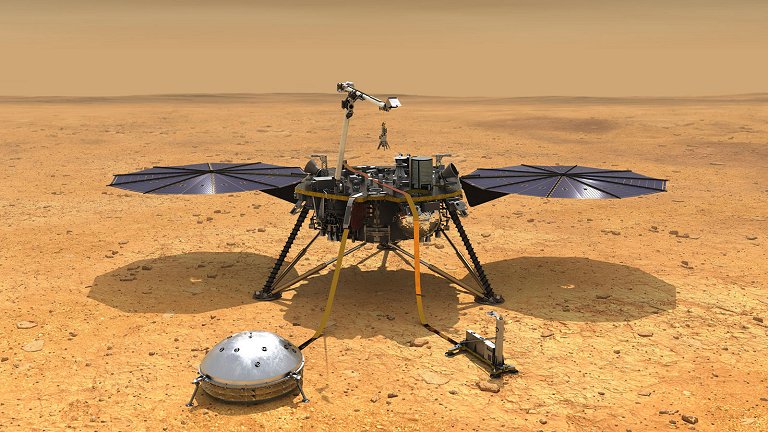 “There is no water here”

Contrary to all expectations, the first comprehensive analysis of data from the Mars probe InSight concluded with a disappointing “Ice not found” message.

“We found that the crust of Mars is weak and porous. The sediments are not well cemented. And there is no ice or a lot of ice filling the pore spaces,” summarized Professor Vashan Wright of the University of California at San Diego.

The catheter InSight (Inland Exploration Using Seismic Investigations, Geodesy and Heat Transport) landed on Mars in early 2019 and is one of the lesser-known Martian probes, perhaps because it is fixed, and not a rover, like the more famous Martian explorers.

In addition to detecting marsquakes, the Mars earthquakes, the probe has an instrument whose data provide estimates of the speed of seismic waves within the planet’s crust.

These velocities change depending on the type of rock and the material that fills the pores in the rocks. Possible pore filling materials include gas, liquid water, ice and other mineral cements. These possible cementing minerals such as calcite, clay, kaolinite and gypsum also affect seismic velocities.

“We ran our models 10,000 times each to incorporate the uncertainties into our responses,” said Richard Kilburn, co-author of the analysis. In the end, however, only the simulations showing a subsurface consisting mostly of uncemented, ice-free material fit the data.

After nearly three years of research, the probe is now covered in dust.
[Imagem: NASA/JPL-Caltech]

No signs of the ancient oceans of Mars

The first surprise is that the 300 meters underground from the surface contains little or no ice. When you remember that the temperature on the surface of Mars, even in the equatorial region, where the probe is resting, has temperatures below minus 50°C, this is an unexpected result.

One of the mission’s goals was precisely to quantify the ice and other minerals in the shallow subsurface of Mars, which can help determine whether Mars once harbored life, understand its climatic history, understand the planet’s geological system and prepare future human exploration missions.

The second surprise contradicts a fundamental idea about what happened to water on Mars. There are numerous indications that the planet harbored oceans of water early in its history, so scientists believed that much of the water had become part of the minerals that made up the ancient ocean floor – and those minerals must have been there, even later. that the ocean dried up.

“If you put water in contact with rocks, you produce a new set of minerals, like clay, so water is not a liquid. It is part of the mineral structure,” explained Professor Michael Manga of UC Berkeley. “There is some cement, but the rocks are not full of cement,” he added, referring to those minerals that act as aggregators in the rocks.

Water can also get into minerals that do not act as cement. But what the data show is an uncemented subsurface, which the researchers call “weak and porous.” And such material is not good for preserving records of life or biological activity in the geological past.

It was virtually a consensus that the Martian subsurface would be filled with ice, but those expectations have now literally melted.

“As scientists, we are now faced with the best data, the best observations. And our models predicted that there should still be frozen ground at that latitude with aquifers below,” Manga commented.

The conclusions presented now are consistent with two other recent analyzes by other teams that showed that finding evidence of life on Mars will require digging deeper, based on data from a wider area collected by the Curiosity rover.

On the other hand, large sheets of ice and frozen ground remain in the Martian poles, and that’s where expectations will turn from now on.

Previous Botafogo formalizes agreement to pay more than R$ 400 million in labor debts
Next Who is the star of the Sandman series?