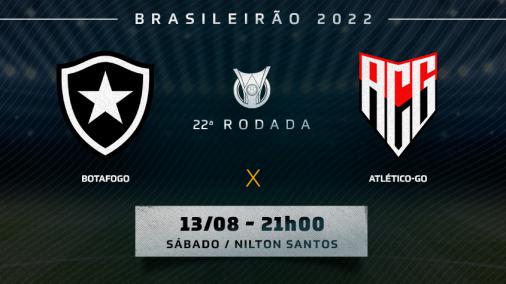 Botafogo x Atlético-GO: probable lineups, absences and where to watch the game for the Brasileirão

O Botafogo returns to the field this Saturday, at 9 pm, to measure forces with Atlético-GO, at Nilton Santos, for the 22nd round of the Brasileirão. Alvinegro tries to improve its performance as home team and win again in the competition. Dragon, in turn, remains in the relegation zone, but is excited after securing a spot in the semifinals of the Copa Sudamericana.

For the duel, coach Luís Castro will have an important absence in midfield. Lucas Fernandes received the third yellow card and is out of the match.

On the other hand, left-backs Hugo and Marçal can reinforce the team and remain as options for the sector. The first was suspended in the draw with Ceará, while the second has been out of the team since he felt muscle pain in the setback to Corinthians.

The Dragon, in turn, will have a series of absences for this Saturday’s duel. Coach Jorginho should keep the rotation scheme in the starting lineup. Arthur Henrique is not among those listed, as he felt muscle discomfort.