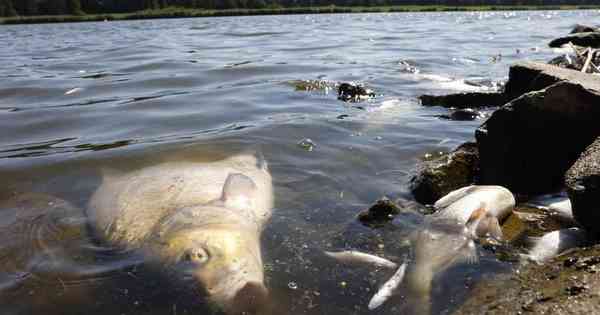 ‘Dead fish everywhere’ in river between Germany and Poland – International

Thousands of fish float inert in the Oder, raising fears of an ecological “disaster” in this river that runs between Germany and Poland, whose authorities have urged the population not to approach its waters.

Schools of dead fish near the eastern German city of Schwedt were likely washed away by currents from Poland, where residents and fishermen first reported cases on July 28.

The German authorities, surprised by the mass arrival of these animals, reprimanded the Polish authorities for not having warned them.

In Poland, the right-wing populist government was criticized for not acting sooner.

Prime Minister Mateusz Morawiecki assured that he became aware of the incident “on the 9th or 10th of August”, “it is evident that I found out too late”.

The day before, he tried to justify himself by saying that “at first everyone thought it was just a local problem”.

“The magnitude of the mortality is very great, enough to say that the Oder will need years to return to its natural state”, he acknowledged, since “huge amounts of chemical waste were dumped, with full awareness of the risk and consequences”. he opined.

From the banks of the river, Michel Tautenhahn, deputy director of the Lower Oder Valley National Park, gazes in dismay at the watercourse that marks the German-Polish border.

“We are on the German side. We have dead fish everywhere,” says AFP. “I am deeply shocked. I have the impression that decades of work are ruined (…) Water is our life”, she laments.

Not only did the fish die, but so did many other aquatic animals, such as mussels. The fish are “just the visible part of the iceberg,” he says.

The Oder has been considered a relatively clean river for many years and is home to forty species of fish.

Many now float lifeless in its waters.

Authorities estimate that the animals were likely poisoned.

The mortality is “atypical”, explains Axel Vogel, Environment Minister of the German state of Brandenburg, assuring that “tons” of fish have already died.

Fish deaths are often caused by abnormal oxygen levels when the water level is too low, he explains.

“But we detected an increase in the oxygen level for days, which indicates that an external substance entered and caused all this”, he says.

Analysis is under way in Germany to establish the nature of this substance. Authorities have already reported evidence of extremely high levels of mercury, something the investigation will have to confirm.

In Poland, the police offered a $215,000 reward to find the culprit behind the contamination.

The opposition, local authorities and environmental organizations demanded explanations from the government and some even asked for resignations from the Ministry of Climate, one of whose deputy ministers even encouraged the population to bathe in the Oder on Thursday.

“This looks like Chernobyl when, after the catastrophe, the Soviet power sent people to participate in the parade on May 1st,” commented Daniel Petrykiewicz, environmental activist, TVN24 television network.

On the bank beyond the river, Tautenhahn worries about the future.

“If it is mercury, it will stay there for a long time”, he says, noting that this metal does not disintegrate and can remain in the sediments for many years.