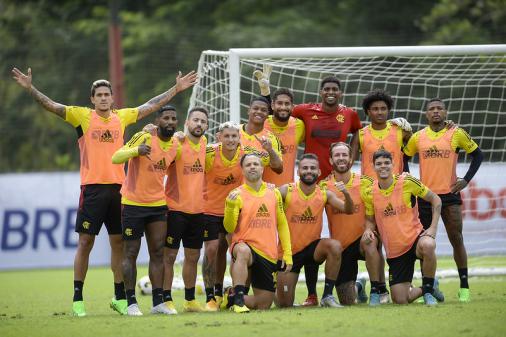 Flamengo trains at Ninho and may have changes for a duel with Athletico; see images

Friday was hard training at Ninho do Urubu. With an eye on the G-4 of the Brasileirão, the squad of Flamengo went to the field and followed the preparation for the duel with Athletico-PR, Sunday, at Maracanã. The match is valid for the 22nd round of the competition.

+ See Flamengo’s schedule until the Libertadores semifinals against Vélez Sarsfield

With no new absences due to injury or suspension, Dorival Júnior has practically the entire group at his disposal and should follow the rotation adopted in recent weeks. There may, however, be two changes in the alternative team that has been playing in the Brasileirão.

David Luiz and Thiago Maia are suspended from next Wednesday’s match – also against Athletico, but for the Copa do Brasil – and can be used this Sunday. In this case, Fabrício Bruno and Vidal can be spared for the decisive duel at Arena da Baixada.

Fully integrated into the cast, Pulgar and Varela participated normally in this Friday’s activity and live in the expectation of being related for the first time.

+ Check the Brasileirão table and simulate the results

The red-black group returns to training at Ninho do Urubu this Saturday, when the preparation for Sunday’s direct confrontation closes. The activity will be decisive to define the lineup and the match related.

With 36 points, Flamengo currently occupies the fifth position in the table. Athletico has 37 and is in fourth place. A victory, therefore, would be enough for Fla to overtake the rival and finish the 22nd round within the G-4 of the Brasileirão.

Gabigol in action at Ninho do Urubu (Photo: Marcelo Cortes/Flamengo)

Previous Atltico prepares for a duel against Coritiba; see photos of training
Next See the full list of nominees for the 2022 Emmy, the “Oscars of TV”