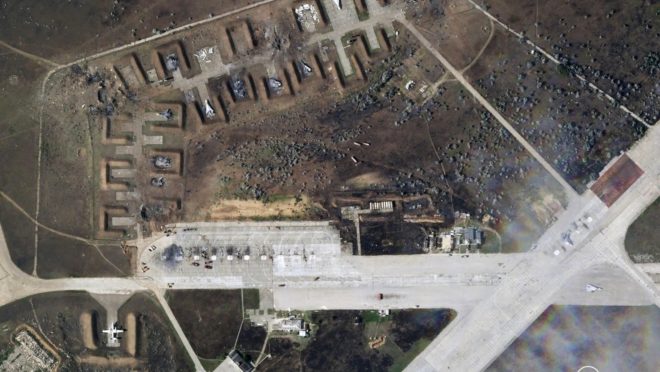 Last Tuesday, the 9th, about a dozen explosions were reported at the Saky airbase in Crimea. Located near Novofedorivka on the west coast of the peninsula, the site is one of the bases for the air component of the Russian Black Sea Fleet, which lost its flagship, the cruiser Moskva, in April. The explosions caused material damage, left injuries and, above all, raise an interesting aspect of the conflict. If the explosions were a Ukrainian military merit, why doesn’t the country claim triumph?

At first, all information came from Russian sources. The Russian governor of Crimea, Sergei Aksyonov, announced that five people were injured, including a child, and that they were being treated accordingly. Photos and videos were posted on Russian social media showing large plumes of smoke in the base region. Subsequently, the number rose to thirteen wounded and one death. According to the Russian Defense Ministry, the “detonation of several ammunition depots” took place.

Initially, Russian defense authorities denied any type of attack and military damage, and that the incident would be investigated to determine the cause of the “detonations”. The following day, however, the US-based company Planet Labs published satellite images recorded on the 9th and 10th. The images contradict the Russian version and show extensive damage, including ten destroyed Su-24 and Su-30 fighter jets. The images also show that nearby buildings, including civilians, were damaged.

On the 10th and 11th, various information from “anonymous sources” of the Ukrainian armed forces emerged. One, quoted by a US newspaper, spoke of an action by special forces and guerrillas operating in Crimea. Another spoke of the use of “long-range weapons”. An air strike from Ukraine was also speculated. On the 11th, pro-Russian channels on social media claimed that the commander of the Black Sea Fleet, Admiral Igor Osipov, was removed and replaced by his second in command, Vice Admiral Viktor Sokolov.

Finally, also on the 11th, the British Ministry of Defence, a country that supports Ukraine in the conflict, in its daily report on the war, stated that the base is probably still in operation and that the “incident” should make Russia “review their perception of threats”. It is also notable that the Ukrainian Air Force celebrated the “small victory” on its social media and with its spokesman, Yuriy Ignat, but without claiming direct involvement in the episode.

The reader may have noticed that little is confirmed, let alone claimed. In the Russian case, the reason for the opacity is obvious. The “incident” narrative is dubious enough to disguise both an eventual accident driven by incompetence and the negative impact of an eventual Ukrainian attack against a base far from the front line. Worse still, an “incident” that certainly caused extensive material damage. Each of the planes destroyed costs a few tens of millions of dollars.

The Ukrainian case, however, is more curious. The media linked to the government celebrated the episode, hinted at some participation and President Volodymyr Zelensky himself took advantage of the context to promise that Crimea will be retaken by Ukraine. There was, however, no claim for the attack. In a war where your country is fighting a more powerful neighbor, suffering setbacks and with part of its territory occupied, wouldn’t it be an important propaganda victory to call for an attack that left great destruction in a base believed to be safe by the enemy?

The answer lies in the fact that Ukraine needs to “eat around the edges” and enjoy its eventual victories almost in silence when it comes to Russian territory. A similar situation happened months ago, when a fuel depot exploded in the Russian city of Belgorod. The images showed combat helicopters amid smoke, but Ukraine adopted the same policy of opacity. For admitting attacks on Russian territory is to give a possible justification for a Russian escalation.

While Russia commits a considerable part of its armed forces to the conflict, the country has not officially declared war on Ukraine, a necessary step towards a general mobilization. Under the Russian constitution, nuclear weapons can only be used if the “existence of the country” is threatened. Ukraine admitting that it carried out attacks on Russian territory could serve as a possible justification for one of these two actions, such as the use of tactical nuclear weapons.

There is another component to these calculations. If such an attack is carried out with weapons provided by the US or by European countries, such as the HIMARS rocket system, Russia could accuse those countries of direct involvement in the conflict, at the risk of an international rhetorical escalation. Something absolutely no one wants. The policy of opacity, then, while withholding Ukrainians from eventual propaganda victories, avoids major problems, both on the military and political fronts.

The specific case of Crimea, however, is paradoxical. Both Russia and Ukraine consider the peninsula part of their territory. It is possible that, at another point in the conflict, Ukraine will carry out military operations against targets in Crimea and speak openly about it. It would do so by denying that it attacked Russia, but claiming that it attacked targets of an occupying power within its own territory. If this occurs, the conflict will likely enter a new chapter, but only the future will tell.

Previous Is it worth buying a folding smartphone in 2022?
Next Without Vargas, Atltico discloses related to the game against Coritiba