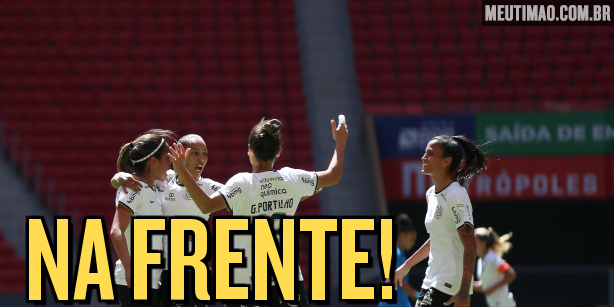 Corinthians opened an important lead in the quarterfinals of the Brazilian Women’s Championship this Sunday. Playing for Mané Garrincha, Timão beat Real Brasília 2-0 with goals scored by Adriana and Vic Albuquerque.

The alvinegra team dominated the entire game and commanded the offensive actions of the match. Timão opened the scoring in the first half with a great goal by Adriana and, in the second half, extended it with Vic from the penalty spot.

Alvinegra schedule: Corinthians returns to the field on Thursday, now in a match valid for Paulistão Feminino. The ball rolls at Fazendinha at 17:00 for the duel against Portuguesa.

Even with the absence of Tarciane, who defends Brazil in the U-20 World Cup, Corinthians took to the field with maximum force of the names they had at their disposal. Arthur Elias scaled the team with Lelê, Paulinha, Gi Campiolo, Andressa and Tamires; Diany, Gabi Zanotti, Jaqueline and Vic Albuquerque; Gabi Portilho and Adriana.

Corinthians started the match by putting pressure on the hosts and valuing possession of the ball. Corinth’s first chance was in a free kick, when Tamires lifted the ball in the area and Jaque tried to finish, but the ball was in a hit hit in the area after the kick of shirt 30, returned in it and went out in goal kick.

Real Brasília tried its first arrival minutes later. Andressa was disarmed at midfield height by Gabi Soares, who built the play through the middle and tried to pass between the defense, but Tamires was attentive to the play and made the protection until Lelê left the goal to keep the ball.

Corinthians responded quickly with Gabi Portilho, who received the deep pass from the right. She invaded the area and tried for cover, but the ball was low and Dida managed to deflect the back line. The corner was ruled out in two halves by the Brasiliense defense.

With about ten minutes, Real Brasília had a free kick after a new move by Gabi Soares, but Sassá’s hit went straight into the goal and Lelê made the save without difficulties. Shortly after, Corinthians had two consecutive opportunities in a corner kick: the first was removed by the defense and the second was in the hands of Dida.

Corinthian pressure had an effect at 22 minutes. The marking at the exit of the ball made Paulinha win by high in the middle of the field and get the pass to Diany. Shirt number 8 triggered Gabi Portilho on the right and the corinthiana went to the back line to make the cross. The ball in the small area found Gabi Zanotti, who tried the move, but was down and, even so, managed to pass to Adriana. The attacker dominated at the entrance of the area, cleared two markers and swelled the net to open the scoring.

Minutes later, the referee took a break to hydrate the athletes and the coaches took the opportunity to, with about 30 minutes, Arthur Elias needed to make the first change in the Corinthians team: injured after suffering an opponent’s entry, Gabi Portilho had to leave the field and gave place for Jennifer. In his first opportunity, shirt 9 finished from the entrance of the area, but the ball passed the bar and went out through the base line.

The hosts again tried to score with Dani Silva, who played on the left and passed Paulinha. From inside the area, she tried the direct kick and Lelê made the deflection in a corner, which was well away by the defense. In addition, Maria Dias managed to play on the left and made the touch in the area, but the goalkeeper from Corinthians got ahead and got the ball.

Corinthians returned to the second stage with another change: Mylena was called by Arthur Elias to replace Gabi Zanotti. And with just three minutes, Timão found itself in a slightly more comfortable scenario in the match: Laíne and Adriana had a disagreement on the field and both were yellowed, but the opponent already had a card and was sent off.

With eight minutes, Mylena had her first important participation in the field. On the right, shirt 19 invaded the area and was knocked down by Carol in a move that resulted in a penalty for Corinthians. In the charge, Vic Albuquerque took the ball and hit the right corner, with no chance of defense for the opposing goalkeeper. 2 to 0 for Timão!

After that, the alvinegra team grew even more in the match and worked well in possession of the ball. In an inattention, Corinthians lost the ball in the attacking field and saw Gabi Soares have a free path through the middle to try the goal. She kicked from the edge of the area, but Lelê made a safe save.

Close to 25 minutes, Corinthians had another good arrival. Timão stole the ball in midfield and Adriana commanded the move from the right to cross in the small area, but the defense managed a slight deflection. The ball still remained at the edge of the area and Vic tried the first shot, but the ball went over the goal.

Minutes later, the game was paused again for hydration. On the return, Corinthians came close to the third goal in a free-kick by Tamires, who lifted the ball in the area and saw Jaque try to deflect his head, but the ball passed the post and went through the back line.

In the next move, another Corinthian danger move, now with Jheniffer. Shirt 9 put pressure on the marking inside the area, stole the ball and hit low, but Dida made the defense and prevented the alvinegro goal.

In the 35th minute, Arthur Elias moved again to Timão: in the last substitution opportunity, the coach launched Yasmim and Lia Salazar for the departures of Andressa and Jaqueline. In one of his first appearances, shirt 71 was accurate and took the front of the opponent who invaded the area to ward off danger.

In the final minutes, Vic Albuquerque suffered a hard entry and was on the field with knee pain. The Corinthians player had to leave the field on a stretcher and did not return to the game. Thus, the teams were left with the same number of athletes on the field, since the alvinegro coach had already made all the substitutions. Shortly after, the hosts had a numerical advantage, as Mylena received the second yellow card and was expelled. Still, Real Brasília didn’t get the goal and the game came to an end in 2 to 0 for Timão.

Previous Max Born, the quantum physicist who warned the world about ‘the cause of all evil’ | Science
Next Paternity leave helps women’s mental health