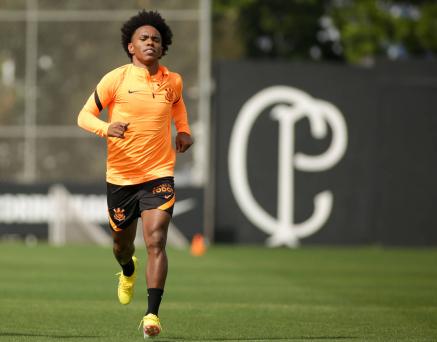 Corinthians fans curse Willian before the classic against Palmeiras

the crowd of Corinthians did not forgive attacking midfielder Willian for leaving last week.

Willian played for Corinthians for 11 months in his second spell (Photo: Rodrigo Coca/Ag.Corinthians)

Just before the ball rolled at Neo Química Arena in the derby against Palmeiras, this Saturday (13), at Brazilian championshipthe former Corinthians number 10 shirt was cursed by Fiel

‘Hey, Willian, go take the c…’ and ‘Willian, go f…, the Coringão doesn’t need you’ were the screams chanted from the stands.

After the elimination of Corinthians in Libertadores for Flamengo, last Tuesday (9), Willian decided to leave Timão. According to the player, the decision has to do with the constant threats he received virtually. There were a few times that he and, mainly, his wife reported these crimes committed against them.

The attacking midfielder gave up the salaries and other financial issues that he would be entitled to receive until the end of next year, when his contract with the alvinegro team would end.

The player’s destination must be Fulham, from England. Fenerbahçe, from Turkey, are also interested in the player, but the fact that he lived in London between 2013 and 2021, when he played for Chelsea and Arsenal, respectively, tends to weigh in on the athlete’s choice.