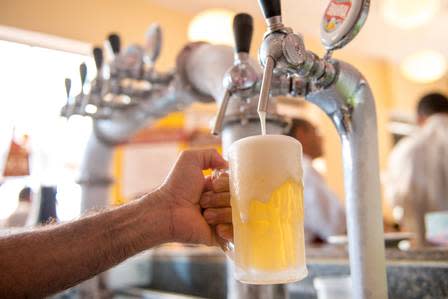 Parents should not allow teens to taste alcohol, experts say

“I’ll say something for the first time in a long time: I haven’t had alcohol in two and a half years,” celebrated Drew Barrymore, star of hits such as “Charlie’s Charlie”, “Like It’s the First Time” and “ET”, in an interview. at the end of last year for an American TV channel. “I noticed that it was something that no longer served me or my life,” added the actress.

While she is quite low-key about her personal life, Drew has a well-known showbiz history of addiction. It was at the age of 9 that she had her first contact with alcohol. Drunkenness at an early age was encouraged by fellow actors, whose presence of such a young girl at an adult party did not cause any embarrassment. They laughed and dared her to drink. She drank and spent much of her 47 years struggling with addiction.

Drew’s example is pedagogical in countries like Brazil, where there is a permissive culture regarding the consumption of alcohol by minors, which is against the law. Not infrequently, one hears the argument “let it drink, who never got drunk as a teenager?”.

Advocates of this idea are often adults who had a lot of experience with alcohol before age 18 and then managed to lead a productive life. What they do not take into account is that consumption in adolescence increases the chances of alcohol addiction throughout life. That’s why many of those who start early end up getting along the way. And, in Brazil, the number of those who start early continues to increase.

This is what the recent National School Health Survey (PeNSE) shows, linked to the Brazilian Institute of Geography and Statistics (IBGE). According to the data from the study, the percentage of students in the 9th grade of Elementary School who have already tried alcoholic beverages grew ten percentage points in seven years: from 53% in 2012 to 63% in 2019. Young people from different social classes are being affected.

“The first problem we have to face is this widespread idea that young people can drink. It’s a harmful normalization. In terms of prevention, we cannot catalog this practice as something common and common – says Ilana Pinsky, clinical psychologist and consultant to the Pan American Health Organization.

Ilana also raises a second concern: the increase in consumption among girls, which is growing faster than among male adolescents. Among 9th grade girls in Brazil, experimentation with alcohol went from 55% in 2012 to 67.5% seven years later. Among boys, the percentages went from 50.5% in 2012 to 59% in 2019.

Although the jump is smaller, the aggregate data of men hides some nuances. According to public health specialist Marco Andreazzi, from IBGE, the trend is decreasing for boys from private schools, but increasing for boys from public schools. In the case of girls, the discharge takes place in the public and private spheres. This increase is of particular concern as it is women who experience the highest rates of depression and anxiety — conditions largely harmed by excessive alcohol consumption.

Antonio de Salles, neurosurgeon at Vila Nova Star Hospital and founder of the Neurosapiens clinic in São Paulo, explains that behind the contraindication of alcohol consumption among adolescents is the attempt to protect the brain at a critical moment in life. Today it is understood that the most important organ of the nervous system is in formation until the age of 25.

Drinking alcohol in adolescence and early youth can compromise this development, especially at a stage in which there are important decisions to be made in terms of personal and career development.

— Alcohol suppresses our neurotransmitters. It offers pleasure, but it is a nervous system suppressant. It can increase dopamine to a point where the brain cannot meet the demand created by the drink. In adolescents this is extremely more severe, as it is the time when brain connections are at their peak, taking memories to the hippocampus – says the specialist.

It is precisely the known harmful effects of alcohol on the still immature brain that experts are concerned about.

— Today we already know that the earlier the experimentation occurs, the greater the chance of frequent use. There is another pattern that we noticed, which is the relationship between the repeated and heavy use of alcohol with a more unstructured family relationship, in which the father and mother have some kind of issue related to mental health, or that the young person himself has a more complex. These things come together,” says Carolina Hanna, a psychiatrist at Hospital Sírio-Libanês, in São Paulo.

The warning sign should not only sound for those who drink with friends at parties. A long study on the topic was published last month. Prepared by Carnegie Mellon University, in the United States, it took into account the health of 4,000 Americans in different periods. When they were in the range between 18 and 24 and later. The result showed that young people who drink alone were more likely to develop alcoholism at age 35.

The problem is global. The World Health Organization estimates that one in four young people between the ages of 15 and 19 around the world regularly consumes alcohol — a serious public health problem.

To take the message of caution to teenagers, experts believe, more than a simple warning from parents is needed, but collective action between parents, schools and governments to discourage this use.

Ronaldo Laranjeira, a psychiatrist at the Federal University of São Paulo (Unifesp), suggests a course of action. He explains that the biggest global example for controlling drinking among teenagers is Iceland.

The reason for the success was the accomplishment of national and periodic surveys that evaluated the emotional health and behavior of young people still of school age. Armed with this information, local governments devoted more resources and attention to extracurricular cultural and sports activities. Families were also invited to be part of this conversation, discouraging the use of alcohol and drugs in everyday activities.

— The family alone cannot look at the children 24 hours a day. It takes a combination of efforts and the establishment of a caring culture. Here in Brazil we have been absolutely negligent with young people and teenagers,” Laranjeira laments.