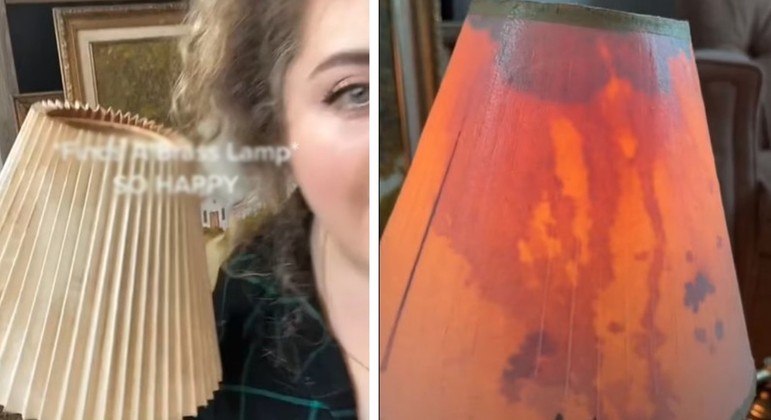 Imagine buying a common item at a thrift store and finding what looks like a literary mystery? That’s what American Paige Nicole, 25, lived through, who bought a lamp and discovered blood marks on it.

Paige lives in Texas and revealed on TikTok the details of the frightening find, at a charity bazaar in Dallas. In the video, she says that the piece drew attention for having a “very beautiful” brass base.

But when she got home and turned on the light to test the device, she was faced with red spots that looked a lot like blood.

“I was horrified, shocked, surprised and alarmed. It was surreal,” she said in the post, which has reached more than 7.3 million views.


She says that she even thought it could be something else, but the idea of ​​looking like blood was what remained in her mind.

“My mind immediately thought it was blood, then food, then wine — but it kept coming back to blood,” Paige added.

As every tiktoker is also an investigator, she decided to take an extra step: take a test to try to be more sure which substance it was. First with black light, which she showed in more detail the bloodstains.

With a cotton swab, she dabbed hydrogen peroxide (better known as hydrogen peroxide) on the stained area. When the two substances mix, it is natural for the blood to bubble up—as anyone who has been injured knows.

In an interview with the Daily Mail tabloid, Paige said she spoke to a member of her family who “has worked with law enforcement for 20 years” and asked him for advice.

The law enforcement official said the substance could be blood, based on the images and the hydrogen peroxide test. His theory was that the previous owner could have committed suicide.

Paige’s next step was to visit a local police station. But the officers refused to launch a case, as the evidence was already contaminated with the DNA of the various people who touched the lamp. What could be done would be the collection of DNA from the blood and its inclusion in a police record.

As a last step, Paige contacted the thrift store to try to find out who donated the device. But the charity said the piece was donated anonymously, so it was “impossible to trace” a previous owner.

“There’s not really a way to get more information about this, so I think it’s up to everyone’s imagination at this point,” her investigation concluded.


READ BELOW: Man discovers fetid blood on wall was from dead neighbor

Previous Bia Haddad appears in 16th in the ranking and is only behind Guga | sneakers
Next Lessons In Chemistry | Apple TV+ reveals the first images of the series starring Brie Larson; Check out!