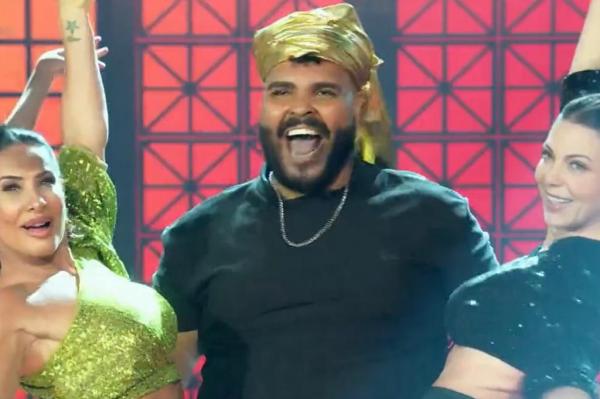 With snow on stage and help from the Sheilas, Paulo Vieira beats Letícia Colin at the premiere of “Batalha do Lip Sync”, on “Domingão com Huck”

Premiered this Sunday (14), the Lip Sync Battlethe new musical framework of the Sunday with Huck, gives TV Globo. The attraction consists of a duel between artists who present performances dubbing songs by renowned performers. Actress Letícia Colin and comedian Paulo Vieira were invited for the premiere edition of the painting, who ended up taking the title of winner of the dispute.

In the United States, the framework, which is called Lip Sync Battleis displayed in the program The Tonight Show, hosted by Jimmy Fallon. The attraction is an audience phenomenon, which became known worldwide after presenting remarkable dubs such as actress Anne Hathaway playing Miley Cyrus and actor Chaning Tatum singing Beyoncé – with her own participation, including.

The painting has already had versions shown in more than 20 countries. In the Brazilian version, each week, two celebrities will face each other on the stage of Sunday in presentations with ballet, choreography and audience support, which is responsible for defining who wins the dispute.

This Sunday’s premiere also marked the return of Rafael Portugal to Globe. The comedian acted as co-host with Luciano Huck, making funny comments and giving your “bits”. Upon arrival, the comedian cheered up the audience by dubbed Vou de Táxi, a hit by presenter Angélica — Huck’s wife — in the 1980s.

Letícia Colin was the first to perform and chose the song Man with H, by Ney Matogrosso, to open the works. Afterwards, it was Paulo Vieira’s turn to take the stage with his performance of Grating The Tchan, from the axé group É o Tchan. The comedian surprised everyone by entering the stage accompanied by two of the group’s original dancers, Sheila Carvalho and Sheila Melo.

ARE THEY! The 90’s are back with @scheilacarvalho and @sheila_mello!

They rocked the Lip Sync Battle with @PauloVieiraReal at the #Sunday! pic.twitter.com/iV9hSWV759

However, the first round of performances was just a warm-up. After the presentation of the artist Ana Castela singing the hit popcornit was time for the big duel of the night.

Wearing a red latex jumpsuit, Letícia Colin returned to the stage to present a performance of the Britney Spears classic Oops!… I Did It Again. The actress had the support of the show’s dancers and was greatly applauded.

Oops! @LeticiaColin did it again and dubs @Britney Spears in the Battle of the Lip Sync of #Sunday. pic.twitter.com/032ZQ9r03P

After a few minutes of preparation, Paulo Vieira finally returned to the stage wearing a navy blue cape and a blonde wig to sing I am freetheme of Elsa, protagonist of the film Frozen. During the performance, which brought artificial snow to the stage, the comedian removed the cape from his shoulders revealing a light blue dress, just like the Disney character.

The audience voted and gave the victory to Paulo Vieira. The painting’s debut was a success and the presentations yielded several memes that ended up on Twitter’s trending topics. See some of them below.

Paulo Vieira is not a person, he is an event! #Sunday pic.twitter.com/AJ2N9OLB9V