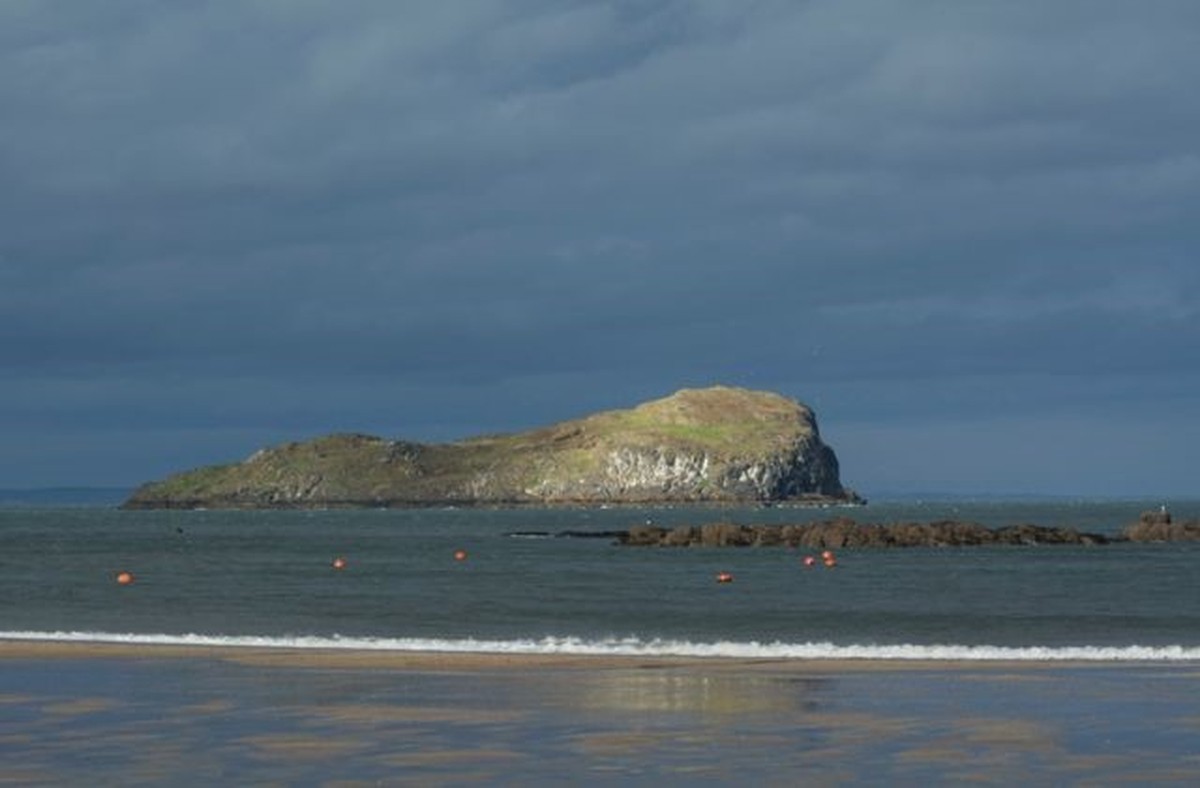 Lamb Island: The Mysteries That Gave Birth to the Newest Micronation Candidate | World

It is said that when Robert Louis Stevenson wrote the classic adventure book The Treasure Islandhe was inspired by visits he made as a child to the Isle of Fidra, which is part of a cluster of three rocky outcrops in the estuary of the River Forth, off the coast of Scotland.

But young Stevenson was unaware of the myths, legends and mysteries attributed to another estuary island near the town of North Berwick.

But it could turn out to be a real-life treasure island. At least, that’s what its exotic owner suggests – the legendary, charismatic and controversial mystic Uri Geller, famous for bending spoons on television in the 1970s.

Thirteen years after purchasing the island, Geller—master of grandiose gestures—decided to elevate Lamb’s status from a private island in Scotland to an independent country, with a flag, constitution and anthem.

While Scotland is busy debating its own path to possible independence from the UK, the emergence of the football field-sized “Republic of Lamb” means its giant neighbor has, in theory, gotten a little smaller.

“Lamb is a unique place,” says Geller from his home in the Old City of Jaffa, Israel, “and it deserves to have its own identity. This is an appropriate way to do it.”

Fidra is believed to have inspired the book Treasure Island — Photo: GETTY IMAGES

Lamb Island is not the world’s first micronation, as these tiny countries are called. There have been dozens of them with declared independence since the 19th century. Some of them are serious, but many are not.

Some even created their own stamps, coins and citizenships. One example was Lovely’s Kingdom, inspired by a TV show and based in an East London flat. It was short-lived, but it can claim the title of micronation with the most citizens, with more than 58,000 people registered online.

Geller also offers Lamb Island citizenship to anyone interested. All proceeds will be donated to the Israeli organization Save a Child’s Heart, which cares for children with heart problems around the world.

He claims that Lamb should be a symbol of peace, and the only requirement for citizenship is a “willingness to live in harmony with Lamb’s countrymen”.

But living on the island is not allowed. Its only inhabitants are the puffins, sparrows and other sea birds. And, until recently, a lone mouse.

“I always wanted to have my island, to be like James Bond,” says Uri Geller, now 75 years old. He first heard about Lamb when he learned that the island was for sale by the newspaper.

But it was the curious—some would say dubious—statement of an amateur history researcher that captured Geller’s imagination and convinced him to buy the island. According to Scotsman Jeff Nisbet, Lamb bears inexplicable similarities to the pyramids of Giza, Egypt.

The precise geometric design of the pyramids is a source of fascination for mathematicians and Egyptologists. Nisbet indicates the shape of Lamb and the two islands that surround it and claims that they exactly mirror the position of the three pyramids.

In fact, Nisbet was not the first to advocate possible links between Scotland and ancient Egypt. A 15th-century Scottish chronicle, described by the National Library of Scotland as “probably the most important medieval account of early Scottish history”, claims that Egypt was responsible for the creation of the country.

The chronicle – called Scotichronicon — claims that Scotland was actually founded by Princess Scota, the exiled daughter of the pharaoh whose army, in the biblical account, sank while chasing Moses and the Israelites across the Red Sea.

One notable character who finds this story very important is the Egyptian-born tycoon Mohamed Al Fayed, who has lived in the UK since the mid-1960s. Al Fayed is an ardent supporter of Scottish independence and has already offered to be the first president of a possible independent Scotland.

Former owner of Harrods luxury department store in London, Al Fayed kept a copy of the Scotichronicon in your office. When she met Geller around 2010, she enthusiastically told him all about the chronicle—and then presented Geller with another copy.

Uri Geller claims that as far back as he can remember, Al Fayed told him the story that Scota anchored her ship off the coast of Lamb and buried treasure there. There is no evidence to document this story, but Geller, who reportedly made a fortune prospecting for oil and mining companies using the ancient practice of dowsing, claims he will employ the same method to search for the treasure.

As Lamb is part of a Special Protection Area, digging is out of the question — but a team of field archaeologists has volunteered to explore the island.

Treasure isn’t the only thing Lamb has to offer. Geller, a self-described mystic, believes the bones of victims of the infamous North Berwick witch trials of the 1590s may also have ended up there, transported from the mainland by superstitious authorities. But experts say all known evidence points to the burial of the remains near the site where the victims were burned.

One of Geller’s favorite objects in his museum in Jaffa is an ancient set of six thin glass spheres painted green, silver and gold, known as the witch’s balls. This type of object was hung in houses in the British Isles in the 17th century to ward off evil spirits.

The idea of ​​making Lamb a micronation came to Uri Geller after considering the possibility of buying the baron title that comes with the territory that historically included the island.

But Lamb was excluded from the barony when she was sold to Geller by the current Baron of Dirleton — Camilo Agasim-Pereira, an Orthodox Jewish-Portuguese-Brazilian businessman — to whom the title had been transferred by the previous owner.

“I didn’t get the title, so I decided to do better and create my own country,” says Geller. “But what does [Lamb ser] particularly special are all these powerful and meaningful spiritual connections. It’s not a common place.”

Some of these connections have been identified by Nisbet, who claims that Lamb lies at a confluence of ley lines—supposed energy pathways that link sites with historical significance. One such line runs straight through Lamb from the Isle of May — the place where the legendary King Arthur is supposedly buried — to the hill of Tara in Ireland, considered an ancient site of the coronation of monarchs, steeped in mythology.

Irish tradition holds that the famous Stone of Destiny, or Stone of Coronation, was brought from Jerusalem to Tara in the 6th century BC by the prophet Jeremiah and the daughter of the last king of Judah. This story was told in a speech to the UK House of Lords by Lord Brabazon of Tara in 1951.

The stone is said to have been used as a pillow by Jacob in the biblical account and later kept in King Solomon’s temple.

The Coronation Stone, or Stone of Destiny, on the Coronation Chair at Westminster Abbey in London — Photo: GETTY

The stone is said to have been taken from Ireland by Scottish invaders, before being stolen and brought to England by order of the English King Edward I on 8 August 1296. This was the date chosen by Uri Geller “in recognition of the glorious history of Scotland” to declare Lamb’s independence.

Geller also believes there is a sign in the curious discovery made by archaeologists beneath the Ottoman-era building that now houses his museum in Jaffa’s Old City.

Among hundreds of artifacts, they unearthed a Scottish brick of Forth, produced off the coast of Lamb Island, after he claimed to have sensed something buried there, using his claimed dowsing abilities. Geller calls the discovery of the brick “synchronicity.”

It is possible to say that synchronicity was also part of Uri Geller’s search for an anthem for his “semi-independent” state (he claims that it is not a political act and that the laws of his new country will be the same already in force before its creation).

In 2021, Scottish telepath Drew McAdam, a friend of Geller – from the Scottish county of East Lothian, which includes Lamb Island – made the first recording of a song called Our Land (“Our land”, in free translation). It was composed by his great-grandfather James Russell in 1909 and now has new lyrics.

“About two days later, Uri asked if I knew any composers, as he was looking for an anthem for his island… and he [o hino] was there, just waiting”, says McAdam, who offered the song to Geller. “I was just happy to hear the melody after all these years and I love [saber] that it is being used in this tremendous project close to home.”

McAdam has since discovered that his great-grandfather, who died in 1928, is buried at Larkhall Cemetery in south east Glasgow, Scotland. And, at Geller’s suggestion, he plans to play the anthem (now named My Island“My Island”) on Russell’s grave.

Uri Geller stayed in Lamb for one night in 2010 with his brother-in-law Shipi Shtrang and adventurer Andy Strangeway, known to have slept on all 162 islands of Scotland. Geller described that chunk of basalt rock as “hard, freezing, and uncomfortable—but [a experiência] It was worth all the pain.”

Ships are unable to anchor at Lamb, earning it the macabre nickname “Suicide Island”, as everyone who ventures there ends up running aground. The trio was recalled the next day. Geller left a crystal that belonged to Einstein on the island as a mark of his visit.

Lamb is not the only private island in the estuary of the River Forth. The island of Fidra has belonged to the Royal Society for the Protection of Birds, while Craigleith and Bass Rock have belonged to the aristocratic Dalrymple family for centuries.

“When I take people on a tour, the fact that Uri Geller owns Lamb is always the biggest reaction,” says veteran local commander Dougie Ferguson, who has spent decades cruising the islands and working the estuary waters with his boat, the Braveheart.

“I met all the previous owners and had never heard of the connection to the pyramids at Giza. But they are important areas for wildlife, and if that brings people to see it, it can only be good,” he says.