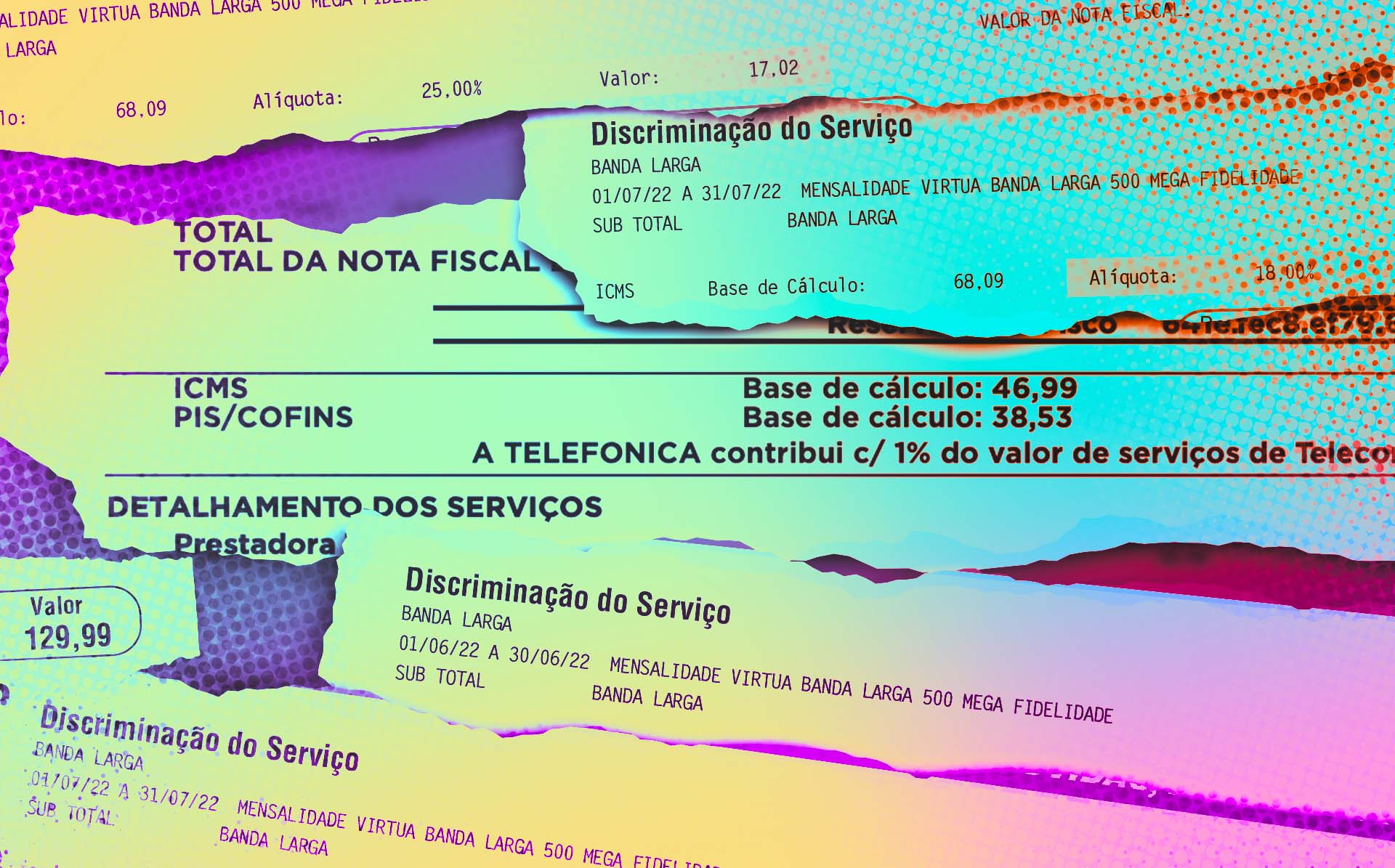 Teles do not pass on ICMS reduction to internet and mobile telephony customers: where does the money go?

The telecommunications operators Claro, Vivo (VIVT3) and Copel/Ligga Telecom are already paying a lower rate of ICMS on their mobile telephony, internet and cable TV services in some states, but they are not passing on the exemption to their customers. The question that remains is: where is the money from “tax relief” going?

In all of them the new ICMS rates, which vary between 17% and 18%, are already in effect between the end of June and the beginning of July. Invoices due in August already show this reduction in the tax paid, but the price charged to customers remained unchanged.

On a Vivo internet account, from a customer in São Paulo, the ICMS paid decreased by R$5.67 from July to August, but she paid the same R$80.99 for the service in both months. In another internet account in the same state, but from Claro, the tax paid was R$ 4.76 lower from one month to the next, but the bill also remained at the same amount (R$ 129.99).

Sought by the report, Claro and Vivo said in a statement that they will pass on the ICMS reduction to customers. But none of the operators answered how the procedure will be done or if the amount that is being overcharged will be returned. Both cited operational difficulties and did not respond to the deadline for completing the processes.

“Claro maintains its commitment to pass on the benefit of ICMS reduction to its customers. However, completing the necessary systemic adaptations will require a short transition period,” the company said.

Vivo stated that “the reduction in the ICMS tax burden will be fully passed on to the consumer”. “As of August, customers will be able to purchase or migrate to plans with the new commercial conditions, which will be expanded to the entire base in the shortest possible time”.

If this difference had been passed on to the customer, the internet bill would have been reduced by 11% (from R$199.90 to R$177.91). Calculated in another way, it is as if Copel/Ligga Telecom had readjusted the price of the service by more than 12% without notifying the consumer.

Sought by the report, Copel said that it sold its telecommunications arm in November 2020 and that the completion of the operation took place more than a year ago. Ligga Telecom, which took over the operator, did not respond to the questions sent until the publication of this report.

The reduction in ICMS paid occurred even in accounts where the tax base for collection increased (and also in these cases the benefit was not passed on to the consumer).

“In practice, the tariff has increased. If the operator is paying less tax, but the client is paying the same amount, he is paying a higher rate for the same service”, says Renata Emery, tax lawyer at Tozzini Freire Advogados. “There was a tariff increase, because the provision of service remained the same”.

“In my view, companies that did not pass on this drop in ICMS [para o consumidor] made a readjustment”, says the tax lawyer Mauricio Terciotti, from Terciotti, Andrade, Gomes e Donato Advogados. “To a certain extent, it pays off for the companies. They’re charging everyone more, and each of those big [operadoras] have 30 million customers. How many of these customers will ask?”

Terciotti says that there is not much that the National Telecommunications Agency (Anatel) can do. “As the market has free pricing, it is difficult for Anatel to interfere in this, in the pricing of companies. Unless she thinks she is being abused.”

Questioned by InfoMoneyAnatel initially stated that it had the power “to determine the transfer of the tax reduction directly to the tariff paid by consumers” only in fixed telephony, which operates under the concession regime (see full answer at the end of the article).

“For the other services (mobile telephony, broadband and pay television), Anatel monitors the prices reported by operators to the agency”. “Anatel’s legal competence does not include determining the adoption of a percentage reduction, since prices for the final consumer are free. Anatel can, on the other hand, monitor the prices charged and, if any abuses are detected, act to repress them”.

Later, when informed about the cases that show that the telecoms were not passing on the ICMS drop to consumers, Anatel stated that it “finds out the facts related to the subject and then will adopt the necessary actions, at the appropriate time”. “Anatel reiterates that the agency’s communication channels are open to directly receive user demands on the subject”.

Who pays the bill?

The National Congress approved in June, almost 2 months ago, a bill that started to consider goods and services related to fuels, electricity, telecommunications and public transport as essential. As a result, the 26 states and the Federal District would be prohibited from charging a rate above the minimum (which is 17% or 18%, depending on the Federation Unit). Days later, the law was sanctioned by President Jair Bolsonaro (PL).

In the case of fuel, which was the main reason for the federal government’s concern (and popular dissatisfaction), the reduction was almost immediate.

But the states are resorting to the courts to compensate for the drop in revenue, as ICMS is the main source of revenue for governors, and fuel, electricity and telecommunications are the three largest sources of ICMS collection (the state of São Paulo says, for example, that the loss of revenue from electricity and telecommunications alone will be R$ 9.3 billion per year).

The states are getting injunctions to offset this loss of revenue from the payment of the debt they have with the Union (which, in practice, makes the federal government pay for the ICMS exemption). In the case of telecoms, which are absorbing this amount, it is as if the Union were giving money directly to the companies.

“It’s a bad deal. The consumer was not benefited, the state lost, the union lost. In the end, the telecommunication companies are receiving a gift”, summarizes tax expert Renata Emery. “It’s the worst of all worlds. The benefit does not reach those who should reach it and stays with those who should not. It’s a distortion.”

Consumer: what to do?

Consumers have different ways to report non-compliance with the ICMS reduction in mobile telephony, internet and cable TV services. The first step is to look for Procon (a body specialized in consumer issues) in the state where you live.

The experts consulted recommend that the consumer has the accounts in hand, which will serve as evidence for the opening of an administrative investigation against the companies. The next step, if the situation is not resolved administratively, is Justice. Civil Courts concentrate this type of action.

Anatel also says that it investigates “the facts related to the subject and, then, will adopt the necessary actions, at the opportune moment”. As for consumer complaints, the agency stated that its communication channels are open to “directly receive user demands on the subject”.

Contacts with Anatel can be made through the following means:

“We reiterate that the information obtained directly from the interaction with the users of the telecommunications companies is fundamental to help the regulatory body to plan its future actions. For more details on how the channels work, procedures and also Anatel’s service solution indexes, we suggest consulting the link: https://www.gov.br/anatel/pt-br/consumidor/quer-reclamar/reclamacao“ , said, by note, the agency.

“Claro will pass on the ICMS reduction to customers and, at the moment, it is in the process of closing adjustments to make this operation possible.”

“Claro maintains its commitment to pass on the benefit of ICMS reduction to its customers. However, completing the necessary systemic adaptations will require a short transition period. And these adaptations become even more complex as states adhere to the new rates at different times.”

“Vivo informs that the reduction in the ICMS tax burden will be fully passed on to the consumer. The technical development, of multiple systems and with plane-to-plane processing, began in July, as soon as the first states made the disclosure of the new rates. The company emphasizes that, as of August, customers will be able to purchase or migrate to plans with the new commercial conditions, which will be expanded to the entire base in the shortest possible time. Vivo continues to monitor the adhesion of the remaining states to carry out the systemic adaptation.”

The company did not respond to inquiries sent until the publication of this report.