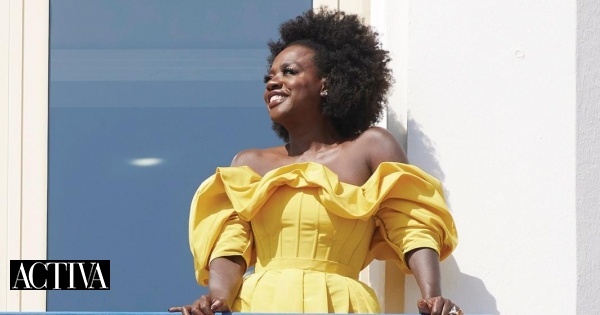 Whatever role he is given, however small, Viola Davis makes him a memorable character. The photo on the side shows us a strong woman, a movie star, an actress who belongs to the Olympus of actors, there she looks like a princess, a queen, and not even for a second we could even imagine how much she has gone through to reach this present moment of consecration. We know this past because she wanted to. At the beginning of the pandemic, says the actress in the special interview she gave to Oprah and who is on Netflix, she had an existential crisis, she felt isolated, disconnected, a feeling that had been coming for some time but that the pandemic exacerbated. That’s why she decided to find herself, to know her true self, reliving her life story, her past, through memories. For months at night, she sat at her desk in her office and started the book ‘Finding Me’.

Viola Davis was born in 1965, in South Carolina, in a plantation house where her parents and older brothers lived. Living conditions were dire, so they decided to come north to Rhode Island, where her father found work as a racehorse handler and her mother as a servant and occasionally employed in a factory. But the money was barely enough to survive. The conditions of the house were degrading, the paper on the wooden walls was peeling, the plumbing froze in the winter, there was no money for heating and the winters in Rhode Island are very harsh, with many degrees below zero and snow… Sisters often went to bed hungry and, as if these miserable conditions weren’t enough, the building was infested with rats that roamed the house at night and even gnawed the faces of Viola’s dolls. Adding to this unhealthy scenario, her father was an alcoholic and when he came home, drunk, he was violent with his daughters and especially with his wife. All that violence terrified Viola and her sisters to the point of wetting the bed. Viola remembers arriving at school reeking of urine, but the lack of hot water at home, money to wash clothes or even soap, gave them no choice. Teachers humiliated them but never questioned why that happened.

“We had practically no clothes, we washed the clothes the day before only with water and left them to dry inside the house because it would freeze on the street.” In the first pages of the book, the actress tells how violence was part of her daily life and not only at home, but at school as well. When she was in third grade, as soon as she rang the bell she would run home because she knew that a group of 7-8 boys would come behind her, insulting her, calling her “black and ugly” and throwing stones at her. . She showed no fear, she carried a crochet hook with her to dissuade them and defend herself. Viola grew up in an environment that led her to think that she, her voice and what she thought were worthless. “I never stopped running, my feet stopped,” the actress tells Oprah.

She was 14 when she first saw on television an actress like her, with a dark skin tone, full lips and a short afro cut, it was Cicely Tyson. “My heart almost stopped because I saw a way out of that misery there.” It was also at that age that she had the courage to rebel against her father, when he, in yet another of his violent episodes while drunk, was beating his mother and threatening her with a broken glass. In a cry of revolt, he asked her to give him the glass. To her surprise, her father calmed down and gave her the shard of glass. It was also at this age, in high school, that Viola began to participate in plays through programs to help disadvantaged students. She found her purpose and all the teachers recognized her enormous talent and encouraged her to pursue a career in the field. For Viola this was the dream, but she knew that she also had to pay the bills and that the unemployment rate for actors is 90%. She decided that she was going to be a teacher, the fact that she was an excellent student helped her to get support, but she was not happy and it was so obvious that her sister Deloris called her to reason, she had to go to the Theater, it was her essence. and what made her happy. Hesitantly, she decided to give her dreams a chance and completed a degree in Theater in 1988. But she felt she had to know more. As she had little money to pay pre-registration fees, she only applied to one school: the prestigious Julliard. She only auditioned – she couldn’t miss work – but managed to get in. Only Julliard was a let down, she gave her the techniques but she couldn’t find her voice, work on her identity. Viola writes that Julliard was too Eurocentric, white, she spent her days in 19th century dresses. XVIII and wigs full of talcum powder and listening to colleagues say how fun it must be to live in those times… Viola screamed inside. “What Julliard was doing was modeling drama students into the perfect white actor, the fact that I was black was ignored, it wasn’t valued. The summer before her final school year she applied for an internship in The Gambia and won. Those months changed her life, she fell in love as soon as she landed, with the people, the smells, the light, the local art and culture, a different person came from there. She graduated from Julliard and started looking for a job, not least because she had to pay her bills, in addition to her $56,000 student loan. But opportunities were slow to come, the roles they had for her were invariably those of marginals, drug addicts, and when she tried other areas the comments from the casting directors were brutal, even those who were not white, “you’re too dark for role X” , “you don’t have the classic beauty for role Y”. But her luck, albeit slowly and slowly, was changing.

Consecration: Delay but not fail

It was with the piece ‘Seven Guitars’ that he won his first grand prize, a Tony. Several papers followed that made him gain a little financial stability to the point where he was finally able to pay for health insurance and take care of himself, his uterine problems, alopecia areata and brutal anemia, and still help his family . Her talent was indisputable, so there was no lack of work, but there were small roles and fleeting characters in series or in the movies. Her big opportunity came in 2008, in ‘Dúvida’, alongside Meryl Streep. It was a small role, it only appeared for 10 minutes on screen, but everyone was mesmerized by her performance as Mrs. Miller, the mother of a child who is molested by a priest. So much so that she earned an Oscar nomination for Best Supporting Actress. Even Meryl Streep was impressed, never getting tired of praising her friend, “give this woman a movie”, she exclaimed at the SAG Awards in 2009. But this one took a while to arrive, and the Theater was still very much present in her life. Another Tony for his performance in ‘Fences’, a small passage in the movie ‘Knight and Day’, with Tom Cruise, in ‘Comer, Pray e Amor’, and then, in 2011, in ‘The Help’, achieving another nomination for an Oscar, in addition to the other awards that I was ‘collecting’. The opportunity to play a leading role came in 2014 with the series ‘How to Get Away With Murder’ by Shonda Rhimes. Viola is invited to play Annalize Keating, a complex and sensual black woman, different from what she had done until then. With this series alone, she won several Emmys, Golden Globes, Screen Actors Guild… the Oscar only arrived in 2016 with the film version of ‘Fences’. Before that, she had already participated in ‘Prisioners’ (2013); ‘Get on up’ (2014), ‘Lila & Eve’ (2015) and ‘Suicide Squad’ (2016). Then followed ‘Widows’, ‘Ma Rainey’s Black Bottom’ and ‘Woman King’ and this year she brings Michele Obama to life in the Netflix series ‘First Lady’. Viola is known for not being afraid to get emotional, or as Steve McQueen, who directed her in ‘Widows,’ says, “She goes where other actors dare not go, she’s not afraid to be human.”

We don’t have enough lines to tell the whole story of this actress in detail, but one of the funniest episodes she writes in ‘Finding Me’ has to do with her love life, a disgrace, she says, in which relationships followed one another, always in an effort to find his soul mate. She was so desperate that she followed the advice of a friend, who she said to get down on one knee and ask God for a boyfriend in full detail. And she knelt there and asked: black man, strong, from the south, athletic, divorced and with children – she didn’t want to be pressured to have children because she had fertility problems – and that he knew how the art world works. Exactly three weeks later, Viola meets Julius Tennon, from Texas, a former athlete, actor, divorced with two adult daughters. It was love at first sight, they got married in 2003. With such an omnipresent and omniscient ‘godfather’, she understands why the intensity of her passion for Julius remains well lit to this day. With him, she founded a production company – to make the films she wants and help young black actresses to succeed in this profession – and adopted a girl who they named Genesis, 11 years ago. She is unanimously considered the best black actress of all time, but she does not put her arms down, she will always be an active voice in the struggle for the rights of blacks and women. “I feel my whole life has been a protest. My producer is a protest. My not wearing a wig to the Oscars in 2012 was a protest. It’s my voice, just like introducing myself and saying ‘Hello, my name is Viola Davis’.”

Previous Alienware announces display with 360 Hz and 0.5 ms response time
Next Athletico-PR x Flamengo: Fabrício Bruno and Vidal are the replacements for the suspended David Luiz and Thiago Maia | Flamengo