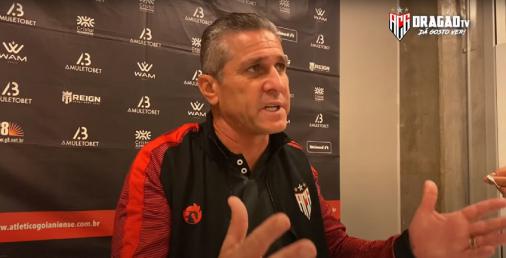 Jorginho defends Cuca and detonates Abel Ferreira’s stance: ‘If I were Brazilian, I would be called a coward’

After securing the classification in Libertadores, over Atlético-MG, Abel Ferreira has been receiving a wave of criticism from Brazilian technicians. An example is that of Jorginho, who detonated the attitude of the Alviverde coach on penalties in the decision. On the occasion, the Portuguese was caught listening to music during the event.

+ Nadine Basttos comments on VAR failure in Palmeiras vs São Paulo, for the Copa do Brasil: ‘Inadmissible’

In an interview with ESPN, Jorginho said that his professional colleague would be called a coward if he were Brazilian. For Atlético-GO’s coach, such attitude only passed because Palmeiras ended up beating Atlético-MG in the penalty decision.

– When people (technicians) win, people forget. If a Brazilian coach went inside the locker room to listen to music at the time of the penalty, he would be called a coward. But because he won, nothing happens. It’s all right,” he said.

In addition, Jorginho also challenged Abel Ferreira. In the interview, the coach promised that if the Portuguese coach won championships with the Atlético-GO squad, he would have his respect.

+ Casagrande says that Palmeiras ‘run over’ Flamengo at Allianz Parque: ‘It’s over’

– We are not at the time when Portuguese are coming here and discovering football, forget it! What happened with Jorge Jesus was extraordinary, what is happening, but it’s because they have a squad like Flamengo and Palmeiras. I want to see him do what he’s doing coming here at Atlético-GO. Come here and you’ll be Brazilian champion-he finished.

Interestingly, or not, Cuca had made similar statements over the weekend, when asked about the game against Palmeiras. The Portuguese’s stance did not go down well with the Brazilian coaches, especially as it is the quarter-finals of Libertadores.

– If defeat comes for them in this game, you were demanding the two expulsions, the six fallen in the same corner, the coach who did not stay for penalties. When you win, everything is perfect, congratulations to Abel, congratulations to Palmeiras, good luck. Okay, I said it – he analyzed.

+ After victory over Coritiba, Cuca criticizes Palmeiras: ‘My team proposes the game’

Atlético Goianiense, by Jorginho, is one of the few clubs that is in every possible competition this season. Dragon’s next commitment is against Corinthians, for the return game of the quarter-finals of the Copa do Brasil. The team from Goiânia won the first duel by 2 to 0 and has a good advantage over Neo Química Arena.

Previous Does Amber Heard have a chance of turning the tables and beating Johnny Depp in court?
Next Why Xiaomi Mix Fold 2 is called a Galaxy Z Fold 4 clone