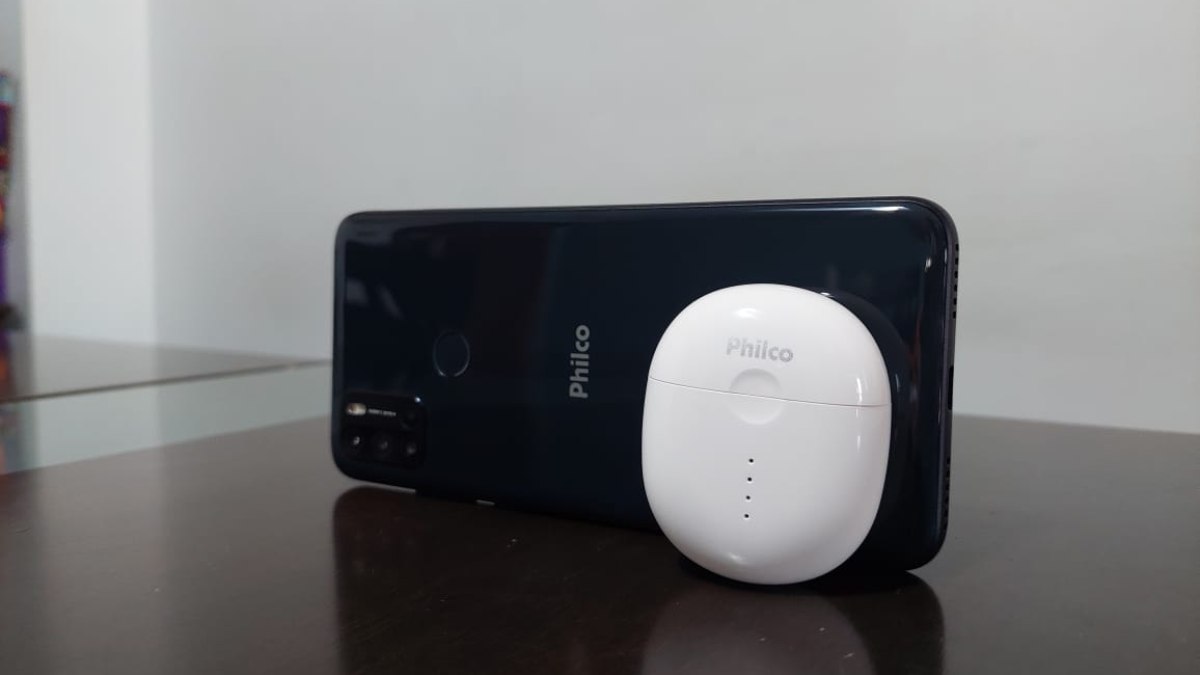 In times when it has become increasingly rare to find a smartphone with a charger in the box, the Philco Hit P13 stands out. In addition to the accessory, the smartphone also comes with a film, protective cover and Bluetooth headphones included. It’s a complete experience for a single price, ensuring ease.

With a beautiful design and fair performance for the category, the Philco Hit P13 fails in the photos, which could be better. The large battery ensures all-day use for those looking for a basic smartphone. Next, check out my impressions of the Philco cell phone. But first, take a look at its specs:

In a bluish black tone, the Philco Hit P13 has a glossy finish and matte sides. The set of quad cameras is located in the upper left corner of the device, without taking up too much space or having too much relief. The fingerprint sensor is located in the center of the top of the back of the phone, in a comfortable place for the index finger to reach.

In terms of design, the only item that I disliked was the hole in the screen that houses the front camera: when the display is on, the black circle is very large, attracting a lot of attention.

When turning on the smartphone, the user finds a simple interface, without many modifications compared to Android 11, the system with which the smartphone is equipped. The icons are square and the interface is clean. Positive point: Philco Hit P13 comes with few pre-installed applications, relying only on Google services.

My biggest disappointment with the Philco Hit P13 was the cameras. The smartphone can do basic images and even has some effects that work well, but it’s not the ideal model if you’re looking for a cell phone that will deliver great photos.

The main lens, 16 MP, takes good photos, but nothing out of the ordinary. The colors don’t come out very vivid, but they don’t suffer any distortion either.

The macro camera surprised me positively. For a basic smartphone, the result was good: the image is not 100% sharp, but it manages to capture details.

Another positive point is the night mode, which managed to lighten the environment well, without generating distortions. The portrait effect and the front camera also do the job, but without spectacular photos.

The big disappointment was the wide camera, which promises to capture photos with a wider angle. I tested the feature in several ways, but pieces of the image were distorted on every occasion. The main lens zoom is also a negative point, as it drops the quality of the images.

Fair performance for the category

The performance of the Philco Hit P13 does well for the category. The smartphone is basic and has a not very powerful processor, so don’t expect too much from this phone.

For everyday activities like watching videos and browsing social media, the Philco Hit P13 was able to perform all tasks well, with few crashes.

I tested the game Asphalt 9, known for being quite “heavy”, and I was pleasantly surprised. A basic cell phone doesn’t even have the obligation to run a game like this, but the Philco Hit P13 allowed the game to run without problems. The sound and screen response was also good. Of course, the experience has some flaws, which is expected for the category, but the game’s performance shows that the smartphone’s performance is good.

The 5,000mAh battery allows the Philco Hit P13 to stay all day away from the outlet for lighter smartphone use. Aside from the cell phone, the accompanying Bluetooth headphones are simple but good. The model is quite light and comfortable and performs its functions well.

Deciding whether a smartphone is worth buying is always something that varies according to the taste of each user. If you’re not a big fan of photography and what you’re looking for is a basic smartphone that can handle everyday life without crashing too much or running out of battery fast, the Philco Hit P13 is a good option.

The problem is the price. As much as it can be found for just over BRL 1,000, the official price of the smartphone is BRL 2,000 – an intermediate price for a more basic model. For the higher price, it is possible to find smartphones with better configurations, such as some from the Galaxy A line, from Samsung, or from the Redmi Note family, from Xiaomi.

That’s why the BlueTooth headset that comes in the box with the Philco Hit P13 must enter the account when deciding whether or not to buy the smartphone. If you don’t give much importance to the accessory, there are better cell phones for R$ 2 thousand. But if you’re interested in wireless headphones, it’s important to research other models to find out how much more you’d spend if you bought a smartphone that doesn’t come with the included accessory.