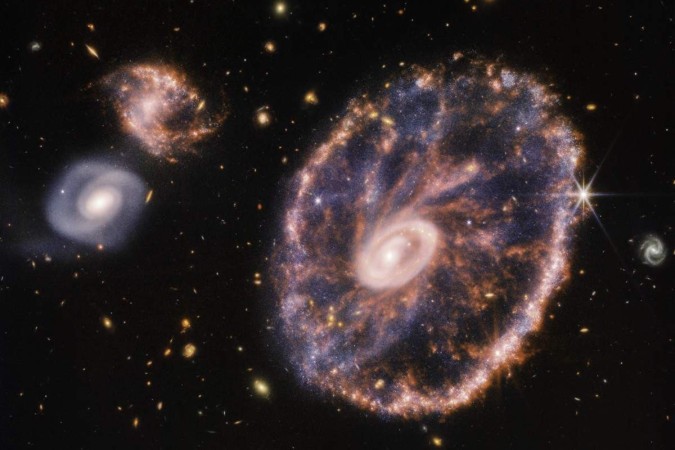 
The James Webb Space Telescope has traversed time and massive amounts of dust to capture a new image of the Cartwheel galaxy with unprecedented clarity, US and European space agencies NASA and ESA reported. – (credit: AFP)

A video released by the European Space Agency shows images of a galaxy from a zoom applied by the James Webb Space Telescope. As it approached, Webb traveled the path between Earth and the Cartwheel Galaxy, better known as the Chariot Wheel, located 500 million light-years away.

With a one-minute duration, the video provides impressive images of the Chariot Wheel and allows the viewer a better perception of the distance that separates the Earth from the rest of the Universe and the dimension of the Milky Way.

The powerful cinematic effect also allows for a privileged view of Cartwheel, which has already been observed by another telescope, Hubble, but with less detail. Images of this same galaxy had also been released, in early August, by NASA.

Result of a collision between two galaxies

The Chariot Wheel formed from a head-on collision between two galaxies. The impact caused two rings to expand from the center of the galaxy, “like ripples in the water of a tank after a stone is thrown into it,” NASA and ESA explained in a joint statement.

At the center of the galaxy is a smaller white ring. The outer ring, which has expanded for about 440 million years, is made up of supernovae and star formation. All these details were observed through Webb’s access to Cartwheel, an unprecedented feat as Webb’s ability to detect infrared light is what allowed it to pass through “an enormous amount of hot dust” that obscured the view of the galaxy, said NASA and ESA.