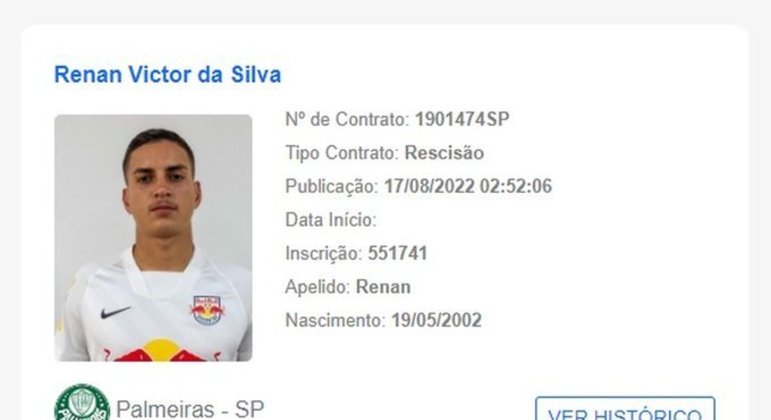 Palmeiras did not accept to pay a cent more to Renan. Contract terminated for just cause. For the death of Eliezer Pena – Prisma

There was no forgiveness.

As the blog had anticipated on the fateful Friday, July 22, when he was involved in an accident that killed Eliezer Pena, Renan would never play for Palmeiras again. His contract would run until December 2025.

The termination was officially published yesterday in the CBF’s Daily Newsletter.

The promise that Renan would never wear the green shirt was made by President Leila Pereira herself. Despite having arrived at the club at the age of 11, being pointed out as one of the biggest promises of recent years, being captain of the under-20 team, with several calls-up for Brazilian youth teams, showing excellent potential.

The website specialized in transactions, transfermarkt, admits that the value of the left-handed defender in the market, before the accident, of course, was 9 million euros, about R$ 47 million.

Leila as soon as she learned the details of the accident was firm with the executive Anderson Barros. Termination of contract for just cause. The Palmeiras legal department accepted the thesis.

The reason was the report of police officers from Bragança Paulista who cite that Renan showed signs of intoxication.

And he refused to take a breathalyzer test.

Or the withdrawal of blood to measure the alcohol content in his body, when he was driving his Honda Civic in the wrong direction, at the height of kilometer 47 of the Alkindar Monteiro Junqueira highway.

And it hit the motorcycle that was driven by Eliezer Pena, 38 years old, who was going to work, around six in the morning.

Renan was returning from a party in Campinas.

The police report, given by a witness, is explicit.

“The driver (Renan) got into the car and lay in the back seat, got out, sat on the floor, cried and vomited.

“A few minutes later, a girl arrived in a white Ford Ka and gave her a lot of water to drink, about two liters, which were in a pet bottle. Soon after, the driver of the vehicle began to urinate.”

He had his driver’s license suspended due to excessive fines.

And, according to the police report, he would have confessed that he fell asleep at the wheel, after staying up all night.

Renan was arrested. And he ended up free having to pay R$ 242 thousand in bail.

The money went to Eliezer’s wife and two daughters.

Leila Pereira was disgusted with the situation.

He ordered that Eliezer Pena’s family be financially supported.

And the contract terminated.

It was the same attitude taken by Red Bull Bragantino, to whom he was on loan until the end of this year.

Renan was indicted for manslaughter, when there is no intent to kill. The penalty is five to eight years in prison. But the Public Prosecutor’s Office can still denounce him for intentional, for driving under the influence of alcohol.

Lawyers for the player also tried the possibility of some financial compensation from Red Bull Bragantino and Palmeiras. But the stance of the two directors was firm. Just cause.

The fatal accident caused by Renan directly affects the image of both clubs. The player’s conduct was considered unacceptable.

The Palmeiras legal department took all the care until the termination was effected yesterday at CBF. So that there is no possibility of legal dispute.

The justice determined that Renan is prohibited from traveling until the trial.

Businessmen took a poll from Al-Jazira, from the United Arab Emirates, to him, as they believe that Renan would not be able to continue playing in Brazil.

But the proposal did not go ahead.

The court did not authorize him to leave the country.

Palmeiras, in 107 years, has never had a player accused of murder under contract.

Information shows that Renan is depressed. Counting on psychological help to bear the situation.

His widow and two daughters went to Allianz Parque to accompany Palmeiras and Goiás.

They had access to Abel Ferreira and the players.

It was a little breath.

To the revolting situation.