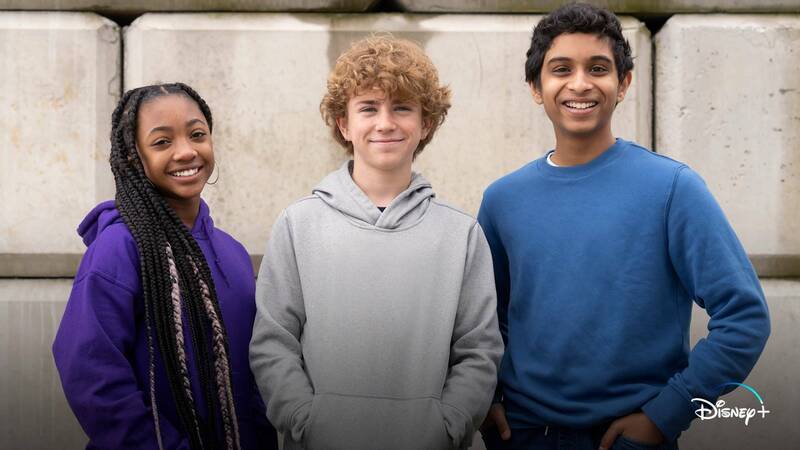 ‘Percy Jackson and the Olympians’: Protagonists are caught recording crucial scene of the 1st book; Check out!

Filming the long-awaited series’Percy Jackson and the olympians‘ continue in full swing around Vancouver.

And the trio of protagonists were spotted in what appears to be a reproduction of a pivotal moment from ‘The Lightning Thief‘, 1st book in the saga written by Rick Riordan.

The pictures show Walker Scobell (Percy), Leah Jeffries (Annabeth) and Aryan Simhadri (Grover) at Simon Fraser University, which had its space changed to look like a museum.

If the series is faithfully adapting the book, it is very likely that this scene is the same one that takes place in Gateway Arch, where the main trio fights (or flees) an Equidina Chimera.

If they tweak the adaptation a bit, one of the book’s opening scenes takes place right in a museum, although only Percy and Grover are included.

Although there is a major battle in a museum in the third book, entitled ‘The Titan’s Curse’it is worth remembering that the series is adapting one book per season.

On its official blog, Riordan brought numerous updates on the production, saying that the adaptation should reach the Disney+ in the first months of 2024.

“I’ve seen some unrealistic dates floating around on social media, so I’m here to temper your expectations. Previously, I had had my hunch was sometime in 2023. I also warned you that this could definitely change.”He wrote.

He continues: “Now that I have a better idea of ​​the work involved, here’s what I estimate: it will likely take us until December or January to shoot the first season episodes, which is basically a month of footage per episode (eight episodes, at total), even though we’re running chunks of the first, second, and third chapters in no order, depending on which set we’re using. That means post-production will begin in 2023, when the pieces are edited, put together and polished with the special effects and sound. This process also takes months and months, and that’s without taking into account closed captioning, subtitling and dubbing in other languages ​​for international viewers. That needs another army of people to get it.”

Finally, Riordan talks about his bets for the series premiere.

“Given all that, I think the release date is more likely to be in early 2024. Again, that’s just my guess.”

Season 1 of the attraction will feature eight episodes.

Remembering that the attraction script is being written by the Riordanin partnership with Jon Steinberg (‘Black Sails’).

As some fans were disappointed with the outcome of the two films starring Logan Lerman, Riordan assured last year that the series will not repeat the mistakes of previous adaptations and the wait will be worth it.

“Having everyone together to align our visions for the series was extremely helpful, and I think a lot of confusion has been resolved (speaking for my own confused self, anyway!). The good news is, the leadership is organized on how to do this show… and do it right. A lot of them have kids who grew up reading ‘Percy Jackson’ too, so they understand. They understand that there are millions and millions of fans eagerly waiting to see ‘Percy Jackson’ come to life in a new way. We feel supported and heard, and I am more confident than ever that the program is moving forward. You all made a difference. always do. Appearing on social media, sharing your excitement about the show… Disney sees you. They’ve listened to you and they want to do right by you Percy fans. That, for me, is the number one priority, so I’m happy!”

“The best part is that James Bobin is on board as our pilot’s director”he commented. “James is an incredible person and an incredibly talented director, someone who knows the saga books well’Percy Jackson’. Your children are fans of the books. so we are in good hands. Thank you all for your enthusiasm for the series. It will be incredible!”

According to the author, the disney will invest heavily in the series and the budget will be similar to that of ‘the Mandalorian‘ and ‘WandaVision‘ – which cost an average of $100 million in the first season.

The plot revolves around Percy, a teenager who discovers he is the son of Poseidon, Greek god of the seas, and is then sent to Camp Half-Blood to be reunited with other half-bloods. There, Percy meets his friend and mentor Grover Underwood, a teenage satyr, and meets Annabeth Chase, daughter of Athena.