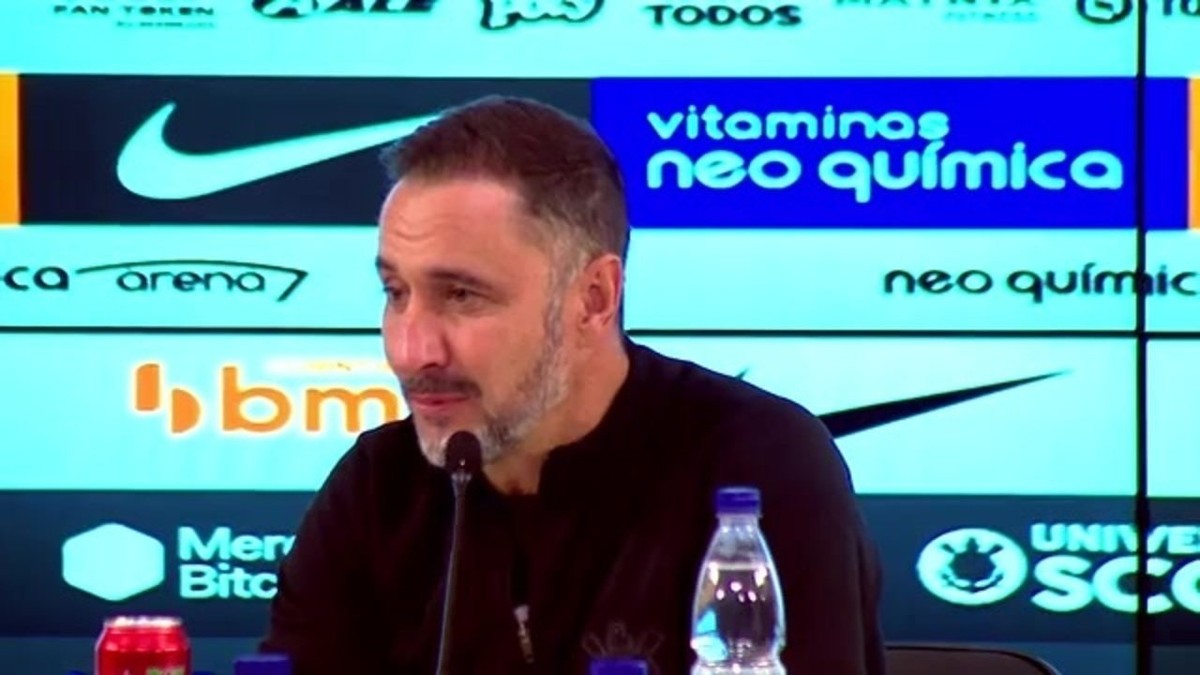 After the match, coach Vítor Pereira celebrated the classification, saying that it was the victory of Corinthians’ “character and union” after a turbulent week with the elimination in Libertadores and the defeat to Palmeiras in Derby. 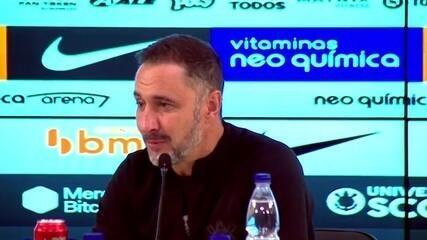 See an excerpt from the interview with Vítor Pereira, from Corinthians, after a rout over Atlético-GO

– My players are to be congratulated today because it is not easy after the previous games, after having lost the games we lost, to give such an answer, the best possible answer to alternate a result of two negative goals, two own goals, it had to be That. And we, in fact, made a great game, a character game, a tactical, strategic game. A pressure game, in which we had to close the opposing team in their midfield. We couldn’t let them do what they did in the game there. And we managed to turn the result around with the help of our fans, also today proving the great passion he has for the club – said Vítor Pereira.

The coach also ruled out any relationship issues with the players:

– The answer has to be given inside the field. Inside the club, what I feel is an atmosphere of union, of family, which goes from the president to the lady in the kitchen. So what I feel in this club is this union. I can’t understand it, it’s natural that when a leadership is strong, maybe it doesn’t please in a certain game a, b or c, but the objective is what unites us: Corinthians. These are the goals that Corinthians has, is to achieve the best possible results and, honestly, I have never seen this group (relationship problems).

– We did our part, our job. The players were sensational and gave the answer. I don’t see any disunity, everyone is aligned in the same direction – said Vítor Pereira.

– It is natural for a player who does not play to be sad, I prefer players who occasionally get upset naturally, but there are no players who are not aligned with the goals of the group or from a tactical point of view. For me, these are things that are sold – said the Timão technician. 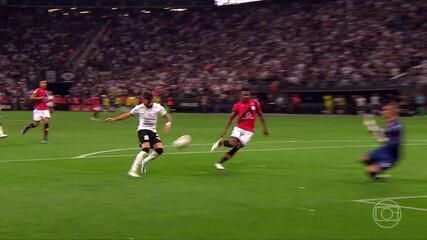 Corinthians will face Fluminense in the semifinals, who eliminated Fortaleza in the quarterfinals. The dates, times and the definition of field orders will be drawn this Friday at the CBF headquarters.

See other excerpts from the collective by Vítor Pereira:

Focus on the Copa do Brasil decision

– At Fluminense there is a lot of quality, a lot of collective and individual quality. A beautiful game, beautiful ideas, a job that I like and appreciate. Now let’s study them, the Brazilian Championship game for me is not a reference, we went there with a very conditioned team, but it is difficult, a very strong team, and we will have to work very well on the game to defeat them. 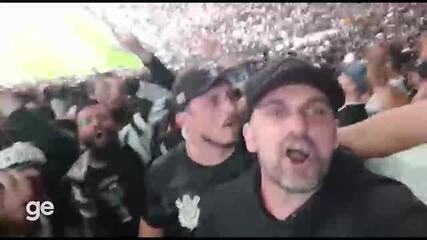 “The crowd showed its strength again”, celebrates Careca | The Voice of the Crowd

– I have some experience, it’s not the first time I’ve left my country, I know it’s important to understand the culture, you can’t arrive with fixed and rigid ideas. Here there is flexibility on both sides. But I also didn’t come to do what others want, I came with ideals to implement, and I hope the team will evolve in terms of quality of play, score more goals, because I like teams that score goals, that press hard, that you press well. Sometimes it’s not possible because working time is very short, but I think this middle ground is balance, I think there’s what they’re used to and what I have to bring to change something, otherwise I wouldn’t come.

– The conversation we had already happened in other countries, when a crowd like ours gives itself with passion and helps us from the first to the last minute, there has to be openness. I have to be open, talk, when asked. Our conversation was based on the statements he had made. I am an emotional person, honest and direct in what I feel and what I say. I was a little impulsive, I was reactive, I reacted without patience, frustrated with the result, not with the quality of the game, with the result, and I reacted a little impulsively. I reacted personally because I felt I was later misunderstood because people confused arrogance with pride.

– I am very proud of what I have built. I built a life out of nothing, an independent life, and I know what it’s like to come from nothing. And I wanted to answer the journalist who asked me the question that I wasn’t doing anything wrong. I came to Corinthians not for the money, and I have no shortage of invitations to go elsewhere to continue earning money. Now, at this stage of my life, I am no longer in this life, in my career. I came to Corinthians out of passion. For feeling identified with the passion of the crowd. And it seems to me that people interpreted what I said differently. What I meant to say is that I will be with body and soul with the commitment to Corinthians, until the commitment ends. And with great respect to people who live in difficulty. A lot of respect because I also came from difficulty, but I built my life, I was lucky, I worked hard and I’m proud. I hate arrogance, I was misunderstood. If I offended anyone good, my apologies. I had no intention.

– He played a good game, surrendered to the game, surrendered to the collective, had space occupations even from a defensive point of view, in offensive terms he has quality. I’m not going to demand much from him from a defensive point of view, but offensively, I’ll always deliver because he has quality, inside or out. Today, he was an asset. So satisfied with his work.

– We tried to pressure them, preventing them from playing the game they like to play, with aisle variations, many players easily sweep the aisles, that’s how they created us big problems at home. The goal was always to push hard, push these men, not give them time for these variations. What happens to us is that after pressing for so long, and being very reactive at the moment of losing the ball so as not to let us counterattack, after a certain point, the players who pressured the whole game start to fall a little, and that time and space begins to emerge.

– When we made the substitutions, I think the game was already a little broken, it was already a game of many transitions and with the substitutions we wanted to give a little more quality to the pressure, but we still had the ability to have the ball and to manage the game with the ball, therefore, we ended up conceding a goal that was a foul that we shouldn’t have committed there in that area. It happens, of course, but that was it.

– I already had experience with some experienced strikers, already in their 28 to 30 years. And great players, who have already gone two months without scoring, even in training. And when high expectations are created in terms of goals, it is natural that there is a certain anxiety there, and we have to talk to him. Yesterday, I spoke to him: the goal will come, but you can’t stop trying. And the striker, when he misses a goal, has to realize that next comes another opportunity and even if he misses the second opportunity, then comes the third. Now, a striker can never lose the confidence of trying to score, of not shooting on goal. That’s what I don’t want him to miss. I think that today, that unlocking, that thing about the first goal to unlock was very good for him and very good for the team. We need him unlocked, mentally unlocked, and to begin to understand more of the moves he can explore, and today he scored three beautiful goals because he has quality.

Brazil Cup is a priority?

– We never prioritized a competition, what we tried so far was to be alive in all competitions. We try to go as far as possible in Libertadores, as far as possible in this cup and be as far ahead in the league as possible. And next week we have a cup again, which means I won’t have time to work, we’ll continue with the game in the middle of the week. The cup to the final is “two hands”, so more games. Now, we are going to try to do the best we can in the Brazilian Championship, there is still a lot of championship ahead of us, if we had won Palmeiras, we would be three points away from the first, and it would not be anything extraordinary for the game we played. But football is what it is, they scored and we didn’t. So it’s doing the best you can, thinking game by game, and trying to accumulate points in the championship, betting on that cup because it’s time to win a title. We’re going to have a tough opponent, but we have to prepare ourselves, and in Libertadores we play the home game with Flamengo, the first half eye to eye. And we went to their house, the stadium was full, and we played eye to eye, as equals, and when we conceded the goal, Corinthians was doing well in the game. What I want to say is that we didn’t give Flamengo a tie, we played a tie both here and there. This is our path and we will continue to think game by game and try to win.

– The experience of many of them helps. The experience of the coach also helps, of the technical staff. And the club also helps. I will say it again: in this club, although we feel a great demand, which is natural, it is a big club, but the atmosphere of tranquility that is lived inside the CT is the key to having an environment capable of bringing everyone together in the same objective , in the sense of giving the answer to two results that took us from the first place and kept us away from Libertadores, therefore, a club with this stability, with this tranquility, which manages to bring people together, is the merit of the people of the club, of the president, and the players who have the quality and experience to get here and give this answer.