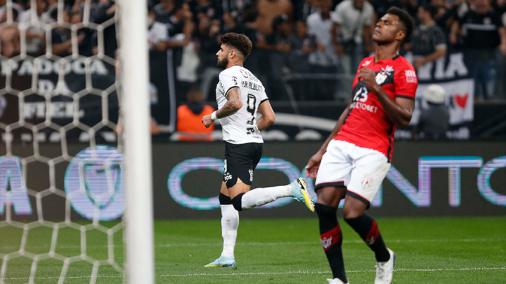 Yuri Alberto details the situation with the president and praises Corinthians fans: ‘It causes pressure on the opponent’

After eight games without hitting the nets, Yuri Alberto ended the fast in Corinthians and scored a hat-trick in the Corinthians victory by 4 to 1 over Atlético-GO, in the Copa do Brasil. In the mixed zone, the striker explained how the history of ‘ticket’ with the music ordered by the club’s president, Duílio Monteiro Alves, to the player.

In the interview with TV Globo, Yuri took from his sock a song that he would ask for having swung the network three times, a joke provided by the program “Fantástico”, from the same broadcaster.

– Yesterday after training, Duílio said he was going to choose a song, that I was going to do a hat-trick, then I said he could choose. He arrived in the locker room today and I said: “Hey, president, did you choose?”. He asked for calm. We warmed up, I was fixing my socks, he gave me a piece of paper with the name of the song and the singer, so I kept it in my shin pad. When I was at the interview after the game, I took off the paper, I was all sweaty, but I managed to read it and ask him for the song – said Yuri, who said he didn’t know the song (London Freestyle), not even the singer (Veigh).

Yuri also talked about wanting to celebrate his first goal with the crowd. After hitting the net for the first time, he celebrated with the fans in the North sector of the stadium, where the organized fans are located.

Yellowed by the referee, he revealed that he was afraid of being sent off in the second half.

– It’s beautiful to see the crowd singing, it certainly makes an impression on the opposing team, a pressure. That player is more important. Thank all Fiel, who supported us today – said the athlete.

The striker also commented on the partnership with Róger Guedes, who served shirt 9 in his first goal. He said he wants to reciprocate the assistance, and said he is getting along with colleagues during games, as there is little time to train.

– We have little time to train, so we create chemistry during games. He gave me an assist, and soon I want to give him one too. Continuing this relationship with Renato too, all the attacking people, this will help us a lot – concluded Yuri Alberto.