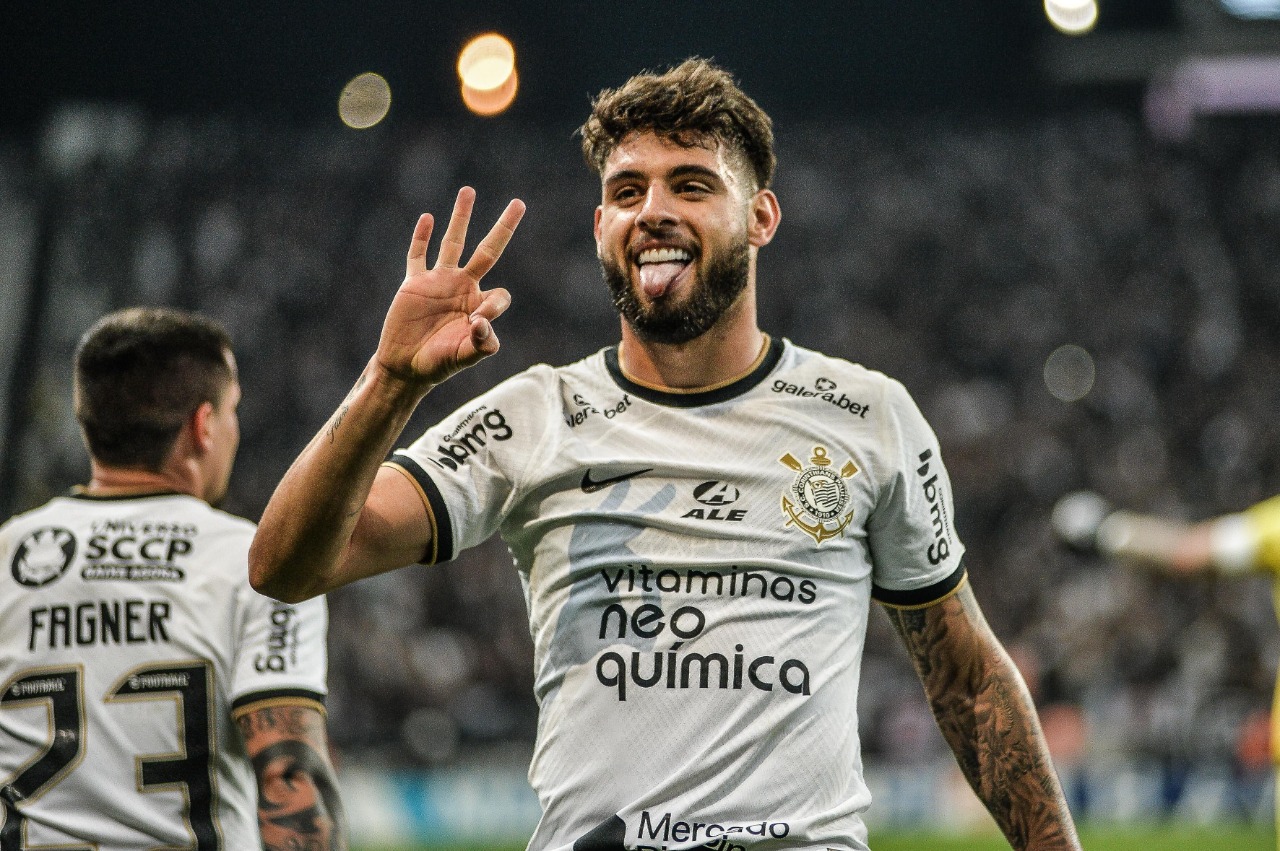 Yuri Alberto disenchants, Corinthians thrashes Atlético-GO and catches Flu in the semis of the Copa do Brasil

Amidst the turmoil caused by recent results, the Corinthians played ball, reversed an adverse score and advanced to the semifinals of the Copa do Brasil, tonight, at Neo Química Arena, by thrashing the Atlético-GO by 4 to 1, with hat trick by Yuri Alberto. With that, the team led by Vítor Pereira will face the Fluminense, who eliminated Fortaleza earlier.

The first minutes were very intense, with clear chances to open the scoring for the hosts, especially with Róger Guedes, who stopped in goalkeeper Renan. The number 10 hit the post at the end of the first stage, but it was Gil who tested to the back of the net, opening the scoring.

In the complementary stage, Timão returned with the same breath, and Yuri Alberto didn’t forgive and immediately scored three to “scare away” the bad phase, swinging the nets at four, 11 and 26 minutes. The result gave the direct vacancy to Alvinegro, who had lost by 2 to 0 in Antônio Accioly.

AND MORE: Find out how much Corinthians pocketed with the classification!

Now, Corinthians turns its attention to the Brazilian Championship, in which it is in third place. The next match will be against Fortaleza, on Sunday, at 18:00 (Brasília time), at Arena Castelão.

To attend the club, the alvinegro fan will need to pay a high amount. Atlético-GO will host Cuiabá on the same day and time at Antônio Accioly.

Chances and a goal

In the first move of the game, a good move from the right, with Adson sending it to Yuri Alberto, who crossed and was blocked. Shortly after, Du Queiroz passed to Róger on the left, who cleared the play and kicked, to Renan’s great save.

In a great move, Du Queiroz passed to Renato, who reversed to Róger on the left, he entered the area and was taken down, but the referee ordered him to continue. Timão kept pressing, with a strong kick by Yuri Alberto from the right, defended by the goalkeeper.

In another move from behind, Róger threw it to Yuri Alberto, who reached the ball and crossed back, but the defense cut before reaching Adson. After several unsuccessful arrivals, with quick exchanges of passes, Adson passed to Renato in the 19th minute. He kicked through cover, but Renan kept the ball.

At 30′, Renato opened on the right, passed to Fagner, who made the low cross, but the defense took it out on time. A few minutes later, Róger Guedes carried the ball through the middle and kicked, landing on the crossbar. Leaving for the end of the first half, Renato Augusto received on the right and crossed directly in the head of Gil, who climbed higher and put the Arena down, opening the scoring.

While Atlético swapped Jorginho for Airton, Timão returned unchanged after the break. The hosts continued to press, still in search of a goal. Starting from the right side, Fagner crossed to the area with danger, but Yuri slipped and didn’t have the ball.

Shortly after, however, shirt 9 did not waste. Róger Guedes dominated at the entrance of the area, cleared the play and passed it to Yuri on the left, who sent it hard between Renan’s legs, scoring his first goal with the club’s shirt.

He barely celebrated and soon scored the second (third of the game), after a free-kick from Renato Augusto, with a header. With the score, the foot left the accelerator a little and the Dragon started to have the ball a little more. Finally, a kick happened, with Wellington Rato.

At 26, however, the night was really Yuri Alberto’s. After a kick from Gil, Renato fixed it and the ball stayed with shirt 9, who invaded the area and kicked over Renan, to make his third of the match.

With Fiel celebrating, Corinthians managed the result, without being threatened by the Dragon, until the 40th minute, when Wellington Rato released a bomb placed in a rehearsed move and managed to score. In stoppage time, Gustavo Silva almost extended it with a well-placed shot, which went close to the goal.

Previous Intimacy: new Spanish series about political scandal premiered on Netflix and has everything to be a success – Sobre Sagas by TechNews Brasil
Next Nubank fires employee for being ‘too senior’ and case goes viral