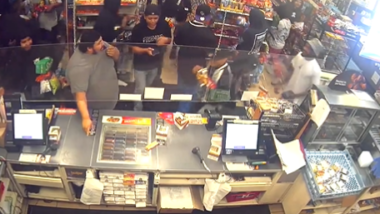 Los Angeles Police Department reported that on Monday (15), at 12:40 am, a crowd gathered for a mass robbery after blocking traffic with cars near a 7-Eleven convenience store.

After performing “hobby horse” maneuvers, turning the vehicles around, the suspects broke into the establishment and stole food, drinks, cigarettes and lottery tickets. the security cameras show part of the robbers throwing objects at employees and vandalizing the store.

The looters then left the establishment and fled to the parking lots and surrounding streets, quickly dispersing before the police arrived.

events called flash mobs refers to a large public gathering in which people perform an unusual or seemingly random act and then disperse, following an organization via the internet or social media. According to the police note, “in more recent cases, however, flash mobs went from spontaneous fun events to criminal occurrences”.

The Los Angeles police also asked for public support for complaints about the suspects for the organization and participation in the crime.

Previous Ex-Big Brother is expelled from Insta and Facebook for sexist opinions
Next After Barbie, Margot Robbie and Ryan Gosling may work together again on successful franchise – Movie News