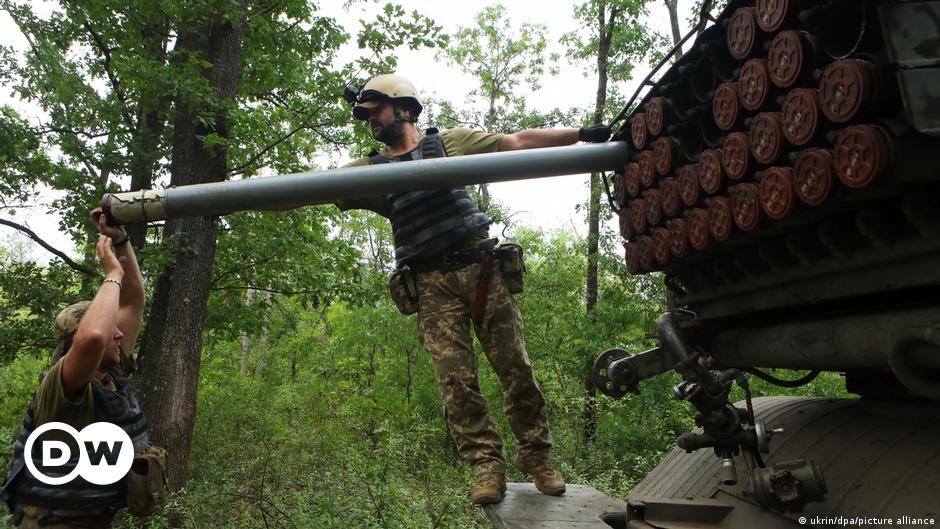 In 1943, during World War II, fighting between the Russian and German armies in southern Ukraine lasted for months, until the Germans finally retreated to the west side of the Dnieper River in early November. The German army had already been defeated at Stalingrad and rallied into what became known as Army Group South, under the command of Field Marshal Erich von Manstein, a staunch Nazi.

“The Wehrmacht (Nazi Germany’s Armed Forces) had to send hundreds of thousands of soldiers just to protect the railway lines in Ukraine and Belarus,” recalls the US retired general and former supreme commander of US forces in Europe. Ben Hodges, in an interview with DW. Logistics are ultimately decisive for war, he emphasizes.

Hodges makes a comparison with Russia’s war against Ukraine and successful Ukrainian attacks. As was the case recently at Saki airfield on the Crimean peninsula, annexed by Russia in 2014. Or when Ukrainian artillery hit more than 50 Russian ammunition depots and commando units in Russian-occupied areas of Ukraine in recent weeks.

“The Russians don’t even have enough people or skills to protect their operational logistics,” says Hodges. “It shows that they are vulnerable. It also shows that their logistics system is exhausted.”

Replenishment is as crucial today as it was in WWII

Historical comparison is difficult. At that time, the Wehrmacht was waging a brutal war of extermination, driven by Nazi ideology. And the dimensions are also different: the Red Army lost 1.2 million soldiers, dead or wounded, just by advancing on the Dnieper River.

At the start of its invasion of Ukraine on February 24, the Kremlin brought 150,000 troops to the Ukrainian border. But Ukraine’s enormous geographic dimensions alone pose problems for the military today similar to those faced in World War II when it comes to securing supplies.

Russia is now extremely vulnerable at this point, says Hodges. Along with other ex-military, politicians and analysts of the US government, he pleads for even smarter short-range weapons systems for Ukraine, such as the ATACMS (Army Tactical Missile System), with a range of 300 kilometers. This missile can also be fired by the US Himars artillery guns, which have recently been the most successful in Ukraine against Russian forces.

In late July, congressional Democrats and Republicans signaled their support for this measure. In mid-August, however, Ukrainian Defense Minister Oleksiy Resnikov made it clear that Washington had not yet delivered any ATACMS missiles. Suspicion that this had already occurred arose after the successful bombing of Russian targets in Crimea – 210 kilometers from the nearest front line in Kherson.

In particular, White House national security adviser Jake Sullivan has so far been reluctant to hand over such weapons systems, for fear of escalation.

But Russia has no other way of escalating the conflict than using a nuclear weapon, argues Hodges, which he considers “extremely unlikely.” Simply because there are no targets in Ukraine “that would change the battlefield in a favorable way for the Russians,” he says. Hodges believes that the use of an even less destructive tactical nuclear missile in Ukraine would immediately result in the US and UK entering the war.

Thus, Russia’s war against Ukraine will be decided conventionally, he believes. That’s why Ukraine needs more modern military equipment and training for soldiers.

For months, Ukrainian President Volodymyr Zelensky has been announcing a counteroffensive in southern Ukraine. But so far the military equipment is not enough for that, says Nico Lange, a specialist in Ukraine and in security, who in the last government of German Federal Chancellor Angela Merkel advised former defense minister Annegret Kramp-Karrenbauer.

Ukraine still doesn’t have “enough armored vehicles and not enough main battle tanks to really win back decisive territory in this vast steppe terrain in southern Ukraine with a major counterattack,” he said. The Ukrainian army is currently “creating the conditions” for such an offensive, Lange told DW.

Above all, the expert criticizes Germany’s reluctance to send heavy weapons to Ukraine. “Time was wasted and of course you need a logistics and training deadline for the delivery of armored vehicles, for example. Now that Ukraine has a chance, not enough help has arrived. This is very regrettable.”

So, are the rocket attacks on the Russian army’s railway logistics and command and communication facilities in the occupied territories preparations for the major liberation maneuver in southern Ukraine?

The communication of Ukrainian elites apparently aims to confuse the enemy during the preparation for the liberation operation. But that cannot happen without the necessary equipment, criticizes Lange.

“In Germany, in recent months, it has often been said that Ukrainians cannot quickly learn to operate Western weapons systems such as the Marder, Fuchs and Gepard combat vehicles. With the American Himars, they proved that this can be done very quickly. Now they would need armored vehicles like Marder.”

Indeed, many Ukrainian soldiers currently have to travel to the front lines in pickup trucks or other common vehicles. Therefore, unshielded and thus suffering a lot of losses.

Ukrainian victory by the end of the year?

Hodges considers it is no longer time to help Ukraine with “teaspoon portions”, but to deliver everything possible. Only then could the country liberate the areas occupied since February 24 by Kremlin troops until the end of the year, and then Crimea and Donbass, possibly through negotiations in the next one or two years, says the retired general.

He believes that while abroad it looks like Ukraine is at an impasse, Kiev is using the time to “assemble a troop until it is prepared, trained and powerful enough”.

For Hodges, it is clear that, according to the theory of Prussian Major General and war theorist Carl von Clausewitz, Putin’s armed forces in Ukraine have reached “the culmination”. The Kremlin Army has passed the point where it “can no longer go on the offensive”. Russia’s army does not have the resources, personnel, or energy for another major offensive, “for whatever reason,” he says.

Each successful attack on an ammunition depot or command post causes the Russian army to push back its supply points further and further, which, according to Hodges, “makes things even more difficult for Russia because the trucks with the ammo now need to walk further”.

When the Ukrainian army is strong enough and Russia’s infrastructure is sufficiently weakened, then, according to the American, Ukraine “will launch the great counterattack”.