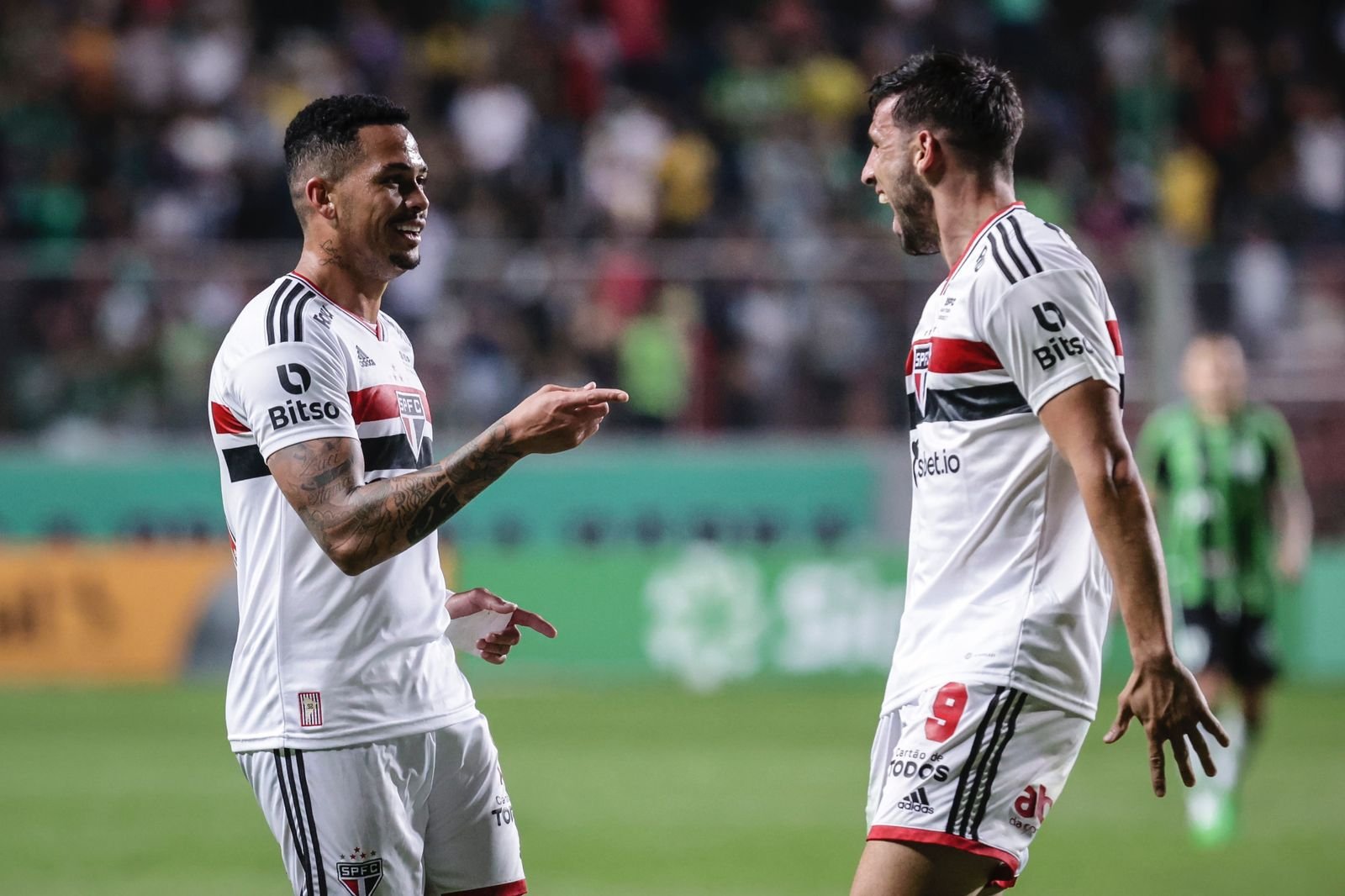 São Paulo suffers, but eliminates América-MG and goes to the semi of the Copa do Brasil

São Paulo suffered, but qualified for the semifinals of the Copa do Brasil. Visiting América-MG this Thursday, at Arena Independência, in Belo Horizonte, the team led by Rogério Ceni opened 2-0, suffered a draw in the second half, playing most of it with one less, but, with the equality in 2 to 2 in the score, advanced of phase, since it won the first game, in Morumbi, by 1 to 0.

Author of the two goals for São Paulo, Luciano was the main highlight of the team in Belo Horizonte. Miranda, on the other hand, left Tricolor in bad shape when he received the second yellow card at the beginning of the complementary stage for a questionable fault, leaving the team at a numerical disadvantage and having to deal with strong pressure from América-MG, which went to nets with Wellington Paulista, from a penalty, at the end of the first half, and with Everaldo, already in the final half of the match.

São Paulo’s opponent in the semifinal of the Copa do Brasil will be Flamengo. The red-black team eliminated Athletico-PR, beating the rival in the middle of Arena da Baixada by 1 to 0. The draw for the field command takes place this Friday, at 11 am (Brasilia time).

São Paulo started the game as if they didn’t have an advantage and quickly imposed themselves against the hosts. Having ease to get to the attack, Tricolor ended up opening the scoring in the 22nd minute, when Rodrigo Nestor arranged for Luciano to beat in place, from the edge of the area, with no chances for Matheus Cavichioli. A great goal.

Five minutes later, São Paulo extended, again with Luciano, who received a beautiful pass from Calleri, dribbled the defender Iago Maidana and hit the corner, scoring another great goal at Arena Independência to bring the Tricolor even closer to the semifinals of the Copa do Brasil.

But, with the wide advantage, the team led by Rogério Ceni relaxed in the end and allowed América-MG to take danger. At 40 minutes, the hosts were rewarded for their insistence. After a VAR review, the referee awarded a penalty in favor of Coelho after Iago Maidana headed Reinaldo’s arm. Wellington Paulista went for the kick and didn’t waste it, discounting just before the break.

In the complementary stage, the situation became even more complicated for São Paulo. Miranda received the second yellow card in a very questionable bid when he missed Everaldo at the entrance of the area and left the Tricolor at a numerical disadvantage after 12 minutes. With that, coach Rogério Ceni was forced to promote the entries of Welington and Nikão in the vacancies of Reinaldo and Luciano, respectively.

But the changes promoted by the coach of São Paulo did not help. In the 20th minute, Pedrinho had enough freedom to raise his head and cross at half height to Everaldo, who completed first-time inside the area to tie the game for América-MG.

From then on, the hosts went all out for São Paulo in search of a comeback and had striker Pedrinho as their main offensive weapon. Tricolor, in turn, tried to keep possession of the ball and occupy the offensive field, leaving the opponent far from their area. Thus, the team led by Rogério Ceni won the hard-fought classification for the semifinals of the Copa do Brasil.