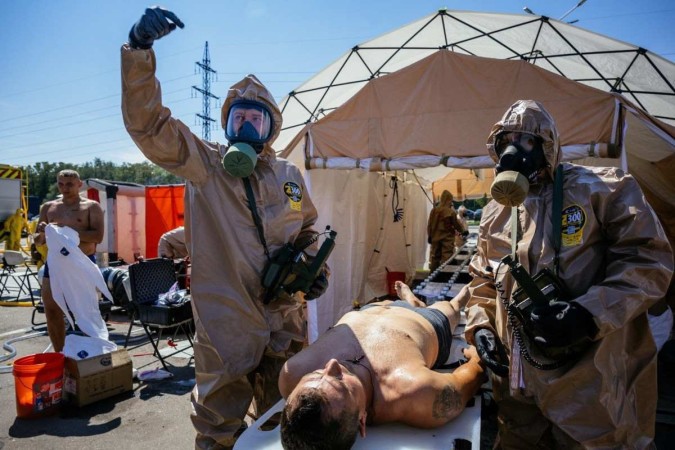 In a telephone conversation, Presidents Vladimir Putin (Russia) and Emmanuel Macron (France) endorsed the dispatch of inspectors from the International Atomic Energy Agency (IAEA) to the Zaporizhzhia nuclear power plant, in south-central Ukraine. The atomic plant was bombed, for which Moscow and Kiev blame each other. The Kremlin admits that the IAEA delegation will aim to “assess the real situation on the ground”. The United Nations (UN) has warned of the risk of a nuclear catastrophe if one of the reactors is hit. Secretary-General António Guterres said any damage to the plant would be “suicide” and urged an end to military activities in the area. He also urged Russia not to disconnect the plant from the Ukrainian electricity grid. “Obviously, electricity from Zaporizhzhia is Ukrainian electricity… This principle must be fully respected,” he argued.

Putin himself acknowledged the danger of a nuclear accident, noting that the Ukrainian army “systematically” bombs the territory of Zaporizhzhia, occupied by Russian forces. The French government admitted that Putin accepted the verification mission through Ukraine, “with respect to Ukrainian sovereignty”. Satellite images showed Russian army trucks parked next to the turbines of one of the plant’s reactors.

In an interview with Mail, John Erath — Senior Policy Director at the Center for Arms Control and Non-Proliferation (Washington) — said he hoped that IAEA inspectors would be able to visit the site and properly assess the situation. “It was difficult to plan a visit because Russia insisted on recognizing its right to control the area, which is legally part of Ukraine. The nuclear power plant sits close to the line between Russian occupation and free Ukraine. So there is the possibility of fighting in the region as long as Russian troops remain there,” he said.

According to Erath, the ban on access to international observers has so far prevented the West from having a clear view of conditions in Zaporizhzhia. “It seems that the Russians placed military equipment inside the nuclear plant, knowing that Ukraine would not attack the installations, given the risk of an environmental disaster. It is a highly irresponsible measure, as the consequences of releasing radiation would be severe,” he warned.

The nuclear non-proliferation expert stressed that Ukraine has no interest in any maneuver that would precipitate a radioactive catastrophe. “Russia, for its part, seeks to occupy portions of Ukrainian territory and force a collapse of Ukraine’s democratically elected government, which would be replaced by a regime under the influence of Moscow. Controlling energy supplies would help the Kremlin in that regard,” said Erath.

He does not rule out Russia using the possibility of an attack by Ukraine as a pretext to disconnect Zaporizhzhia from the Ukrainian grid, which would deprive the country of 20% of its electricity. “Winter is coming. Thousands of civilians could starve or freeze to death. Unable to achieve its goals on the battlefield, Russia can weaponize winter,” added Erath.

A resident of the city of Zaporizhzhia, about 100km from the nuclear plant, lawyer Hryhorii Nemchenko is skeptical about the inspection of the facilities. “I do not believe that IAEA officials will have the opportunity to check the real situation of the atomic plant. But the threat continues, even though today we have not seen clear signs of detonation or heavy bombing of the nuclear plant,” he told the report. Nemchenko also considers it possible that Russia will try to disconnect supplies to certain regions of Ukraine, the consequences of which will be severe during the winter. According to him, Russian forces are actively moving in the area of ​​the nuclear power plant. “Ukrainian authorities are concerned about the deteriorating situation on August 24, Ukraine’s Independence Day. Russia may take unexpected actions,” Nemchenko warned.

Previous Player linked to Corinthians scores a goal and decides the classic in Serie B do Brasileiro; watch
Next São Paulo with a mixed team in the classic against Santos; See probable team