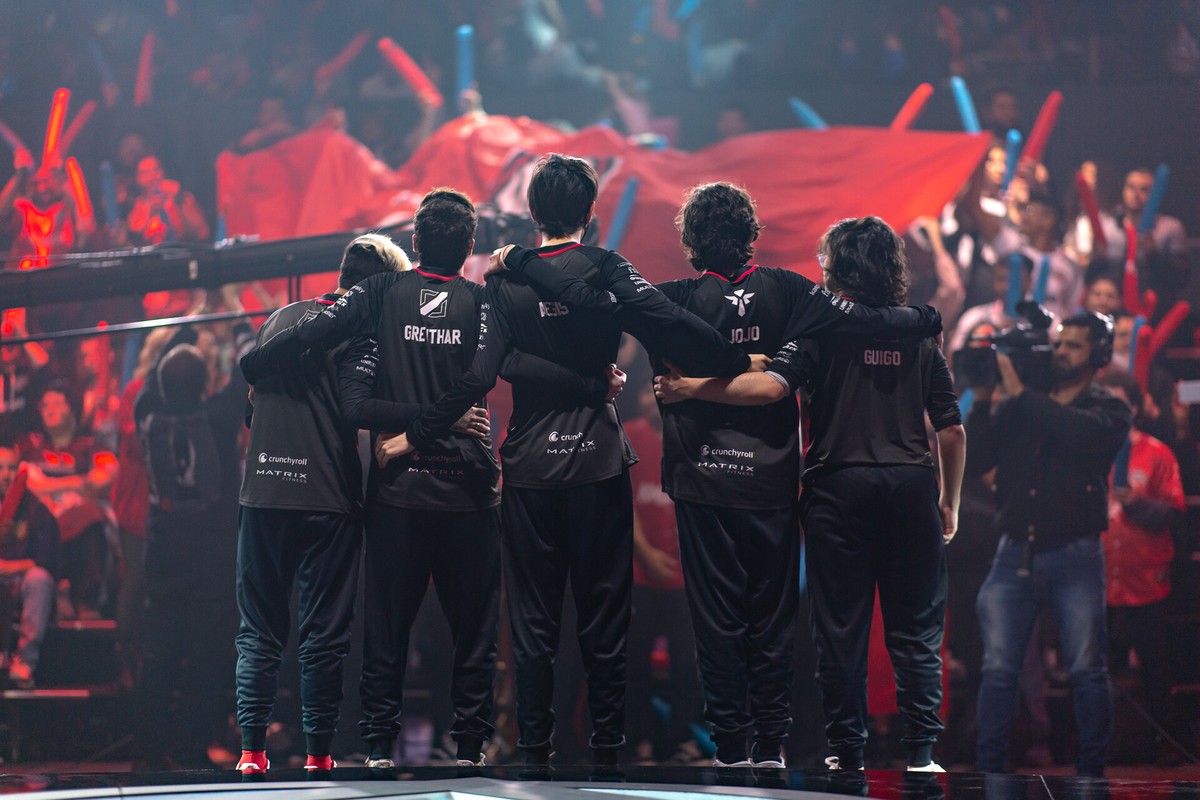 RED Canids Kalunga won 3-1 and eliminated KaBuM this Saturday, in Round 2 of the lower bracket of the 2nd Split of the 2022 Brazilian League of Legends Championship (CBLOL), continuing the dream of winning the third consecutive championship, in a sequence that started in the 2nd Split of 2021. With the same squad base since 2020, the players are saturated with each other, according to shooter Alexandre “TitaN” at a press conference after the triumph against the Ninjas. Asked if, because of this, the 2nd Split of 2022 could be the last tournament of this squad, the player deflected and said that it was not the time to comment on that.

RED Canids players hugging, in front of the crowd at the CBLOL studio, after winning against KaBuM in the 2nd Split of CBLOL 2022 — Photo: Bruno Alvares/Riot Games

At the press conference, TitaN answered a question from ge about the strength of RED Canids even through ups and downs. In the 1st Split of CBLOL 2022, the Pack won the title after losing the initial series of the playoffs upper bracket and defeating all opponents of the lower bracket to reach the grand final. In this 2nd Split, you can follow the same path.

— That Lower stop [chave inferior] it’s because we’re seeing our lives go by in a way that, if we lose, we won’t play LoL for a long time, and we really want to play. No one on the team wants to see another [time] representing Brazil. Winning three times in a row is a very big story, a very big achievement for Brazil. We are very comfortable in this situation, to be honest, very confident too. It’s not like we haven’t gone through this situation once, but I think it’s going to be difficult this time,” commented TitaN, comparing it with the 1st Split and citing the upcoming commitments in this 2nd Split.

In Round 3 of the playoffs lower bracket, next Saturday, August 27, at 13:00 (GMT), RED Canids will face FURIA, the leader of the qualifying phase and who lost to paiN Gaming in Round 1 of the top key. If they advance, the Pack will play the final of the lower bracket, the next day, at the same time, against the loser of the confrontation between paiN and LOUD in the final of the upper bracket, being able to repeat the walk of victories of the 1st Split.

It was during this response that TitaN cited that players are saturated with each other. In the qualifying phase, RED Canids came to open eight wins and one defeat in the first round and then dropped in performance, finding itself again in the decisive straight. In Round 1 of the playoffs upper bracket last week, the Pack lost to LOUD 3-1.

— We are getting right again, we put more pride and ego aside. We’re pretty saturated with each other, to be really transparent. It sucks for you to keep a team for so long and not have these disagreements, these arguments, that any team would have after so long together. Unfortunately our defeats were more for that factor, and it means much more to win for us. I think we put everything aside, ego and pride, at least for the moment, so that in this final stretch we can get along and be confident and in a better mood.

Questioned by ge if the cast saturation had already been resolved or if the 2nd Split of CBLOL 2022 should be the last championship of this cast together, TitaN replied:

“I don’t think this is the time for me to say these things now. We’re winning, we’re winning now, I’m very confident in the boys, once again. I think you have to measure the things you say, and being transparent sometimes ends up being bad. So, I prefer to answer this question, because we’ve already talked and are going through a lot together, and I think we have to focus more on ourselves and be ready for next weekend.

TitaN is one of the oldest members of RED Canids. He joined in May 2019, after the top Guilherme “Guigo”, who has been with the organization since May 2018, still at a time when the team was playing in the 2nd division, on the defunct Desafiante circuit. With the two and the hunter Gabriel Vinicius “Aegis”, hired in January 2018, RED Canids won the 2nd Split of the 2020 Challenging Circuit, with coach Calisto “Coelho”, in charge of the coaching staff until today, in charge.

At the franchise’s debut in 2021, support Gabriel “Jojo” joined the cast, which also included midfielder Adriano “Avenger”. Another mid lane player, Daniel “Grevthar” rose from the academy team to the main squad in the playoffs of the 2nd Split of CBLOL 2021, from which the Pack came out champions. The second championship came in the 1st Split of CBLOL 2022. For the 2nd Split of this season, RED Canids said goodbye to Avenger and brought top Felipe “Boal” to be Guigo’s reserve.

Previous Actress Emilia Clarke is called a runt and chubby by a big shot in the release of new ‘Game of Thrones’ – Monet
Next TudoGames: 10 fantastic Xbox Game Pass games to play now!