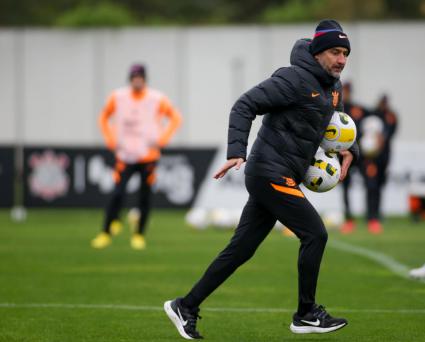 Corinthians may have an alternative team and ‘kid’ debut against Fortaleza

With an eye on the first leg against Fluminense, for the semifinal of the Copa do Brasil, Corinthians can play with an alternative team at Castelão, where they face Fortaleza, for the 23rd round of the Brazilian.

+ GALLERY – Check the balance of the Corinthians transfer window

The first indication that Vítor Pereira does not use maximum force in the duel against Vojvoda’s team is given by the presence of five U-20 athletes in last Friday’s training: defender Zé Vítor; winger Léo Maná; midfielders Guilherme Biro and Matheus Araújo, in addition to striker Arthur Sousa.

However, not everyone should travel with the Corinthians delegation, given the U-20’s commitment to the quarter-finals of the Brasileirão. On Sunday, at 11 am, the team coached by Danilo will play the second game against América-MG, in Fazendinha. Timãozinho won the first duel by 2 to 0.

Of the ‘kids’ mentioned, Léo Maná is the one who has the most chances of not only being related, but also starting the match against Leão do Pici. The trend is for Fagner to be preserved for the duel against Tricolor das Laranjeiras, and Rafael Ramos has an uncertain status as he suffered an injury to the posterior thigh muscle against Palmeiras.

Maná had already been an option on the bench in the 4-1 rout of Corinthians in the quarterfinals of the Copa do Brasil.

+ TABLE – Does Timão have a chance of a Brazilian title? Simulate the Brazilian

The young athlete should have defender Raul Gustavo by his side. One option to play with Raul would be the entry of Bruno Méndez, who did not stay on the bench against Dragão as he had already played in the Copa do Brasil during his loan to Internacional.

That way, Vítor Pereira would preserve Gil and Balbuena for the duel against Diniz’s team, at Maracanã. The Corinthians coach, after being eliminated by Flamengo, said that the Paraguayan defender was tired. Since then, the Portuguese coach has not been able to control the physical load of shirt 31.

The rotation should also affect the midfield, given that Du Queiroz, Fausto Vera and Renato Augusto were starters in the last two matches of the alvinegro club, against Palmeiras, in the Brasileirão, and Atlético-GO, for the Copa do Brasil. The trend is for Cantillo, Roni and Giuliano to form the trio of socks at Castelão.

In attack, Róger Guedes and Yuri Alberto are also candidates to start the game against Leão do Pici on the bench, as both come from a heavy sequence and should play against Fluminense.

Júnior Moraes and Giovane emerge in the fight for the vacancies of the duo, while Mosquito should be the attacker on the right side in Vítor Pereira’s 4-3-3.

Previous Saturday Session Film is The Day After Tomorrow
Next Ranking of the best mobile operators in Brazil; Check out which ones stand out