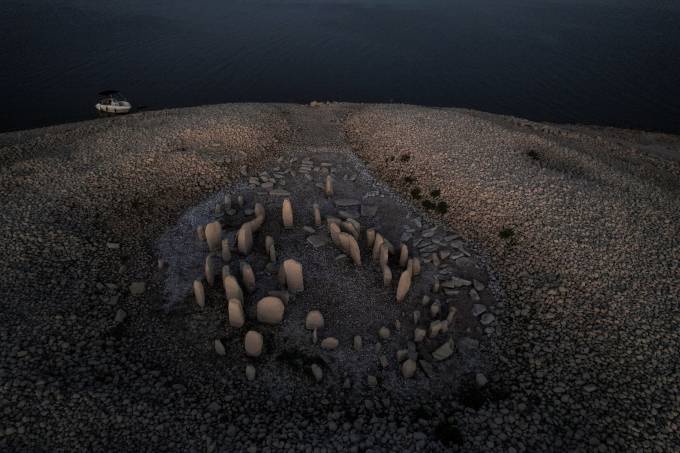 THE heat wave that plagues the Spain had an unexpected side effect: the discovery of a prehistoric stone monument in a dam whose waterline receded after the country’s worst drought in decades. The circle formed by dozens of megalithic stones emerged in the Valdecanas reservoir in the region of Estremadura, western Spain, where authorities say the water level has dropped to 28% of capacity.

+ With melting glaciers, 500-year-old mummy is found in the Alps

“It’s a surprise, it’s a rare opportunity to be able to access it,” said archaeologist Enrique Cedillo, from the Complutense University of Madrid, one of the experts rushing to study the circle before it goes back under water.

Emergence of prehistoric stones in a drought-hit dam

The dolmen of Guadalperal, also known as the Spanish Stonehenge, is seen due to the receding waters of the Valdecanas reservoir in the outskirts of El Gordo, Spain. (via Reuters)

Spain’s prehistoric stones were initially discovered by German archaeologist Hugo Obermaier in 1926, but the area was flooded in 1963 in a rural development project under the dictatorship of Francisco Franco. Since then, the archaeological site has only become fully visible four times.

Cedillo estimated that the rock construction dates back to 5000 BC. The complex was named the “Dolmen of Guadalperal”, but nicknamed the “Spanish Stonehenge”, in reference to the similar monument, formed by concentric circles of stones 5 meters high and weighing almost 50 tons, located in England.

+ Archaeologists find unpublished ruins of a medieval village in England

Dolmens are stones arranged vertically, usually supporting a flat stone. While there are many scattered across Western Europe, little is known about who built them. Human remains found in the vicinity of these complexes have led scholars to the theory that these constructions may be tombs.

+ Head of Hercules is found submerged in a shipwreck in Greece

The discovery is seen as an opportunity for entrepreneurs in the region, who estimate that tourism and commerce will intensify around the monument. Local historical and tourist associations advocated moving the stones from Guadalperal to a museum or other place on dry land.

+ Climate change has a paradoxical effect on historical relics

However, the drought that caused the emergence of rocks is causing damage to local farmers, who say their crops have been devastated by the hot weather.

Climate change has left the Iberian peninsula at its driest in 1,200 years, and winter rainfall is expected to decline further, a study published in the journal Nature Geoscience has shown.

Previous Guess ge: see the bets of presenters and commentators for the 23rd round of the Brasileirão | guess center
Next Ponte Preta x Guarani – Live – Brazilian Serie B