The discovery of a crater in West Africa raises new questions about what happened on the fateful day that an asteroid collided with what is now the Gulf of Mexico 66 million years ago, leading to the extinction of the dinosaurs and the formation of the famous crater of Chicxulub.

Recently revealed by scientists, the Nadir crater is about 8.5 km in diameter, is 400 km off the coast of Guinea and 300 meters below the sea. Its estimated age is similar to that of the Chicxulub crater, which raises the possibility that they are somehow related — for example, both could have formed after the impact of fragments from the same asteroid.

Probably, the Nadir crater was formed by the collision of an asteroid that was just under 0.5 km in diameterwhile the one that created the Chicxulub crater was estimated to be 12 km in diameter.

The asteroid that fell in the Gulf of Mexico region unleashed powerful earthquakes, tsunamis and a firestorm. So much dusty material reached the sky that the Earth went into deep cooling. Dinosaurs did not survive the climate shock.

On the other hand, the asteroid that may have generated the Nadir crater was not so large and did not cause damage in these dimensions, but it also had its impact. Information about the crater found off the coast of Guinea was published by researchers this Wednesday (17/8) in the scientific journal Science Advances. Although they presented evidence that an asteroid was responsible for the formation, a second possibility is that the crater is the result of volcanic activity in the past.

“Our simulations suggest that this crater was caused by the collision of a 400m wide asteroid”, explains Veronica Bray, from the University of Arizona, USA, one of the authors of the publication.

“This would have generated a tsunami more than a kilometer high, as well as an earthquake of magnitude 6.5 or more.”

“The energy released would have been approximately 1,000 times greater than that observed in the January 2022 Tonga eruption and tsunami.”

The newly revealed crater was identified by Uisdean Nicholson of Heriot-Watt University in the UK as he analyzed seismic survey data. This type of analysis, often carried out by mining, oil and gas companies, documents the different layers of rocks and sediments underground for kilometers deep.

Illustration of the Chicxulub Crater, shortly after its formation — Photo: GETTY IMAGES/BBC

The team of scientists is cautious when linking the Chicxulub and Nadir craters. Based on the analysis of fossils found near the Nadir crater, it would have a very similar age to Chicxulub, but to confirm this, it is necessary to remove and analyze rocks from the crater itself. This type of study would also confirm if indeed the Nadir crater was caused by an asteroid.

The idea that Earth may have been hit by a cluster of large space rocks in the past is not new. Some have speculated that the impact that created the Boltysh Crater in Ukraine could also be related in some way to the event that spawned Chicxulub. Their ages are not very different. Professor Sean Gulick, one of the leaders of a recent project to drill the Chicxulub crater, comments on these relationships.

“A much smaller cousin, or a sister, doesn’t necessarily add to what we know about the dinosaur extinction, but it does contribute to our understanding of the astronomical event that took place at Chicxulub,” Gulick, a researcher at the University of Texas at Austin (USA) tells BBC News.

“Was it the breakup of a celestial body whose various fragments hit Earth over time? Was Chicxulub a double asteroid in which a smaller object orbited a larger one? These are interesting questions to investigate, because knowing that Chicxulub may have been accompanied by a second crater formation slightly changes the story of how (the crater of) Chicxulub came to be.”

– This text was originally published at https://www.bbc.com/portuguese/geral-62589453 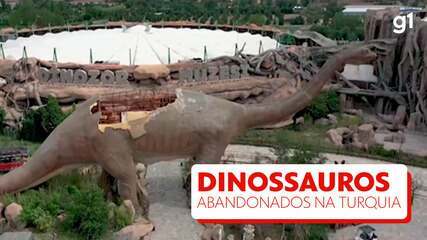