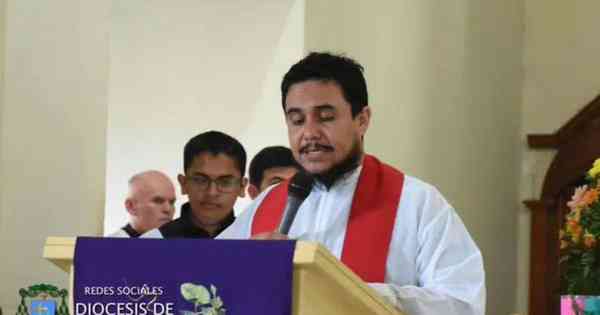 Father Scar Benavidez Dvila was arrested on Sunday (14/8) amid an escalation of repression in the Catholic Church in Nicaragua. Two other priests have been arrested in the country since June last year, in addition to the closing of seven diocesan radio stations, the banning of processions and the expulsion of 18 nuns of the order of Mother Teresa of Calcutta.

According to the court case, the Nicaraguan state considers itself “victim and offended” by the cleric’s actions, but the crime he allegedly committed is not specified. scar Benavidez works in the parish of Espírito Santo in Mulukuk, in the extreme north of Nicaragua.

According to a report on the website Confidencial, a vehicle for independent Nicaraguan journalism, the police say that the priest is in Mangua, the country’s capital. Church sources say he is in a prison known as “El Chipote”, which is denounced as a torture center by human rights organizations.

A reform of Nicaragua’s Penal Code approved by the National Assembly in February last year changed the period for detaining criminal suspects for investigation from 48 hours to three months. The Public Ministry requests this time to investigate Benavidez, who was removed from his vehicle and taken by the police after celebrating a mass on Sunday.

According to Confidential, the priest is known for his charisma and was a former advisor to the Youth Ministry of the Diocese of Matagalpa. In 2018, after the crisis triggered by the repression of Daniel Ortega’s regime, “the priest began to see how parishioners were afraid to attend Mass and began to resign from the pastoral positions he was given as priest.”

The other two priests arrested in the last year were Manuel Garca de Nandaime and Monsignor Leonardo Urbina. The first was accused of assaulting a woman and the second of rape. In both cases, the trials were characterized by a lack of due process, according to independent jurists.

For 14 days, the Bishop of Matagalpa, Archbishop Rolando Alvrez, has been under police siege with eight other people at the Episcopal Crea of ​​Matagalpa. He is critical of the government of Daniel Ortega and Rosario Murillo. The country’s telecommunications agency said the seven closed religious radio stations do not meet the technical requirements to be on the air, without specifying which ones.

According to Confidencial, the judge responsible for the case is part of the courts that acted against political prisoners as part of a network of officials who subordinated their judicial decisions to the party of Daniel Ortega, president of Nicaragua.

Previous VPN apps on iOS “are a scam”, says security researcher – Tecnoblog
Next Neymar’s son’s visit to Vila is an advance in Santos’ goal of getting closer to the star | saints