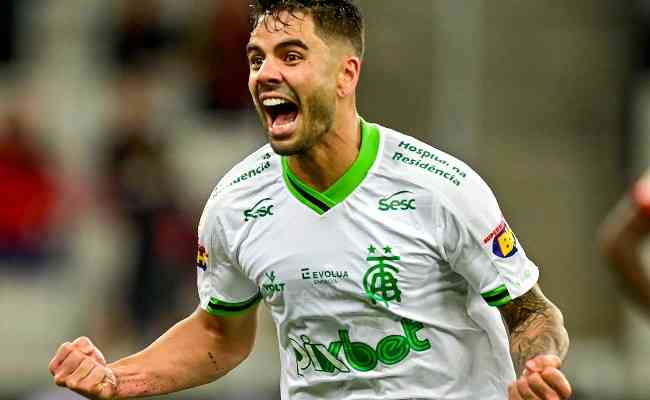 With a goal, America draws with Athletico and extends the undefeated series in Serie A

With a beautiful bicycle goal from Henrique Almeida, Amrica got a 1-1 draw against Athletico-PR, this Sunday (21), at Arena da Baixada, for the 23rd round of the Brazilian Championship. With the result, Coelho reaches five unbeaten games in Serie A, but loses a position in the table.

Athletico-PR opened the scoring in the 25th minute of the first half, with an own goal by the defender der. America tied at 18 of the final stage. Henrique Almeida finished with a bicycle after a good offensive plot involving Pedrinho, Juninho and Felipe Azevedo.

With the result, Coelho is in the ninth position of the table, with 31 points. Vagner Mancini’s team had four consecutive victories in Serie A: over Atltico-GO (1-0), Ava (3-1), Juventude (1-0) and Santos (1-0). Athletico-PR is in fourth place, with 38 points.

In the next round of the Brazilian Championship, America has a state classic against Atltico. The game will be next Sunday (28), at 4 pm, at Independência, under the direction of Coelho. The day before, Athletico-PR visits Cear, at 9 pm, in Castelo.

America opted for a more measured strategy in the first half, barely attacked Athletico-PR and had few opportunities to counterattack. Coelho still had the misfortune of losing two players due to injury in the initial stage: Al and Matheusinho, at 12 and 32 minutes, respectively. Emmanuel Martnez and Pedrinho entered.

Athletico-PR had the first chance to score in a shot by Terans from outside the area, in the 13th minute. Matheus Cavichioli jumped into the left corner and sent it to a corner. At 23″, the American goalkeeper made two good interventions in a row with submissions by Fernandinho and Pablo. However, an offside was marked in the play.

More effective on the field, Furaco opened the scoring in the 25th minute. Abner crossed low from the right wing, and the American defender tried to clear the ball, but sent it to his own goal. Matheus Cavichioli still tried to spread the ball, but the ball had already crossed the line: own goal. Pablo, on the rebound, still completed for the net in the sequence of the throw.

At a disadvantage, America was more free in the attack, dominated the actions in the final minutes of the stage and scared in two submissions by Henrique Almeida. In the first, the forward took advantage of Juninho’s cross, but headed in Bento’s hands; in the other, he hit hard from the edge of the area and sent it over the goal, with danger.

The second half started out pretty evenly. The Furaco almost extended the score in Matheus Cavichioli’s wrong exit from the great area. The goalkeeper tried to cut with his feet, but Terans kept the ball and risked from far, but out. At 18 minutes, America reached the tie in a beautiful goal in the Arena da Baixada. Pedrinho left with a heel to Juninho, who crossed from the left. Felipe Azevedo dodged his head in the area, and Henrique Almeida completed on a bicycle, commanding Bento’s angle: 1 to 1.

Athletico-PR tried the second goal in submissions from Fernandinho and Vitor Roque. Matheus Cavichioli made safe saves. Leo Cittadini and Rmulo also took danger in conclusions that went close to the American goal. To contain the opponent, Vagner Mancini reinforced the defense with the entry of defender Ricardo Silva in the vacancy of midfielder Lucas Kal. In the attack, Everaldo and Wellington Paulista replaced Felipe Azevedo and Henrique Almeida. Vitor Roque still threatened in additions, but could not change the result in Curitiba.

Reason: match of the 23rd round of the Brazilian Championship

Previous WhatsApp function that can recover deleted messages
Next You may be charging your iPhone the wrong way; see dangers