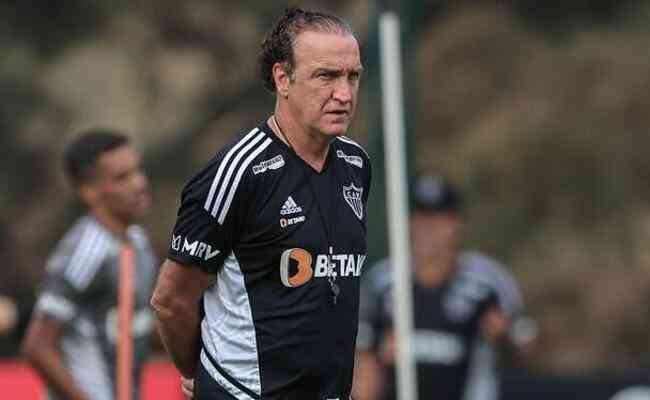 Cuca calls for an interview to explain the phase of the Atltico: ‘They are playing well’

Surprisingly, coach Cuca called a press conference not scheduled for the afternoon of this Monday (22), before training in Cidade do Galo. The captain asked to speak with journalists in order to justify the phase of Atltico, which only won one of the last eight games of the season.

Under Cuca’s command, there are six matches, with one victory, two draws, three defeats and the elimination to Palmeiras in the quarterfinals of the Copa Libertadores, which corresponds to a low use of

“I came today to talk because I thought that the best way is for me to convey to the fans our feeling than to remain something in the air, without anyone answering the questions regarding the group delivering more, how to do so that the results come”, he began. the commander (read the complete answer at the end of the text), in a remote interview, called ten minutes before by the club’s communications department.

“We had 121 shots in six games and scored five goals. We have to see what’s happening. You’re creating so many scoring opportunities and making so many conclusions, but the ball isn’t going in. It’s more than 20 conclusions to make a So, you have to understand why the ball is not going in. Lack of training? Let’s train more. Do we have to be more concentrated? Let’s concentrate more. Do we have to be more natural to make the right decisions? , scored.

“It’s no use today for a player to come here and explain, because he won’t have the numbers. We’re the ones who have it, my team, the staff, who produce. If you look for the championship numbers, we’ll be first in terms of defining plays, but not in terms of use. That’s why I came here today to tell the fan that we’re not playing badly. And he knows that. We’re playing well, but we’re not winning. If you’re playing poorly and you’re not winning, it is a much harder path to seek victories. My expectation and hope is that they will come from the next game onwards”, added the coach.

Eliminated from Libertadores and Copa do Brasil, Atltico occupies the seventh position of the Brazilian Championship, with 35 points – 14 less than the leader Palmeiras. Despite the alvinegro team being out of the qualifying zone for the Copa Libertadores, Cuca did not throw in the towel in the fight for the title.

“We have 15 rounds this year to finish the championship, so we can do our best. The title is a long way off, but we haven’t thrown in the towel yet. It depends on a fantastic start, but anything in football can happen,” he said. .

Atltico are trying to recover in the Brazilian Championship next Sunday, when they face América, at Independência, for the 24th round. The ball rolls at 4pm.

Read Cuca’s answer about the team phase in full:

“I came today to talk, because I thought the best way was for me to convey to the fans our feeling than to leave something in the air, with no one answering the questions regarding the group delivering more, how to make the results come.

I’m not much for getting attached to numbers. I don’t like, after the games, to arrive and say: ‘Ah, but I finished more, I had more possession of the ball…’. But that’s the reality of football. I can speak for myself. In the six matches I’ve been here, we were worse than Internacional in the first half, when we conceded three goals. But it was a game where we finished 21 times against nine, with much greater ball possession. And so on.

It’s one thing you’re playing badly. You will be playing badly and being involved in another process, you have to change, you have to radically change the team to find a team that gives you an answer. We are getting a technical response from the team, but we are not getting the results and we have to go after it. Sometimes, one or another change is necessary, but I don’t think it has to be a radical, abrupt thing, a change of almost everyone because the team is not playing well. Not that.

We have to score more goals, turn 20% of the chances created into goals. enough so that we can come to win. We’ve conceded a lot of goals, unlike last year, in half the chances we create. another thing that we have to look for the cause and work on. This week, yes, full.

It starts today, there’s a training game for those who aren’t playing, to set the pace of the game, to observe some players and, from what we understand, to be able to make some changes to the sequence of the championship. And seek this championship game by game. Every game is a story, and it starts for us on Sunday, in the classic with America. Who knows, maybe we’ll have a better fortune and be able to win.”