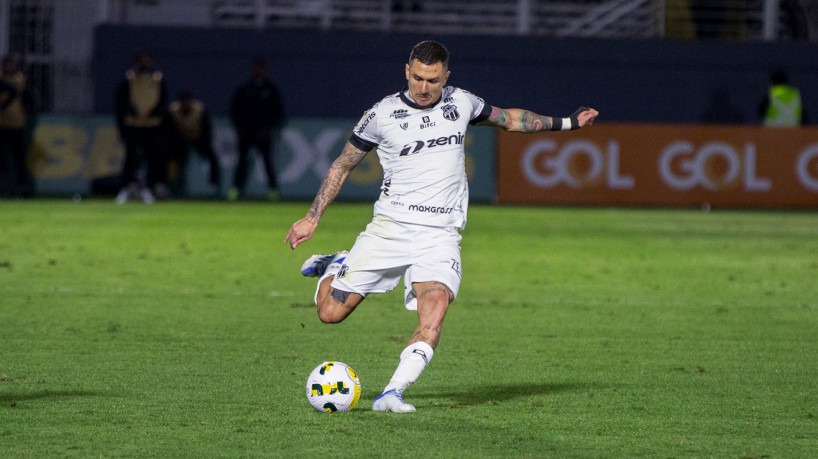 In a game of five penalty kicks, Ceará draws with Bragantino for Serie A

In a night marked by five penalty kicks – two converted -, Ceará tied with RB Bragantino by 1 to 1 at the Nabi Abi Chedid Stadium, in Bragança Paulista (SP), for the 23rd round of Serie A of the Brazilian Championship. With the result, Alvinegro reaches the fifth game without a win in the national elite, for which it now totals 26 points and occupies the 15th place.

Vovô now has a free week of preparation, as the Porangabuçu team will only enter the field on Saturday, 27th, to face Athletico-PR at 21:00, in a duel that takes place at Arena Castelão for the 24th round.

The beginning of the confrontation was frank, with Ceará and RB Bragantino attacking each other frequently and imposing an accelerated rhythm in the articulations of the plays. Although busy, the good performance of the defensive system of both teams stood out the offensive actions, causing in a first half of few clear chances of goal – and the ones that had, were all of the São Paulo club.

Excessive passing errors and poor decision making in the last third of the field also hampered teams in the completion of attack plays. Tactically, Massa Bruta managed to be more proactive and kept possession of the ball, concentrating the advances on the right side with Artur.

Alvinegro, more restrained and with low marking lines, tried to explore spaces through counterattacks through the speed of the Colombian duo Mendoza and Jhon Vásquez, using too much long balls. The strategy, however, was not executed efficiently. No wonder, Grandpa finished only once correctly to the goal defended by Cleiton, in a bid at 36 minutes of the initial stage.

And it was exactly through Ceará’s strategy that, in the 44th minute, in a direct call from the defense to Carlos Eduardo, RB Bragantino had the best chance of the first half. In the bid, the attacker was head to head with Luiz Otávio, gained in speed and ended up being knocked down by the defender inside the penalty area. The referee, without hesitating, signaled the penalty, a decision that generated several complaints from the white-and-white athletes.

In the duel between João Ricardo and Lucas Evangelista, responsible for the charge, better for Vovô’s archer, who guessed the corner and made a great save, preventing the black-and-white team from going to the locker room with the disadvantage on the scoreboard.

On the return of the break, Juca decided to take Mendoza, the team’s top scorer in the Brasileirão, to put Erick. On the field, Bragantino returned imposing strong pressure on Vovô, a scenario that required several important defenses by João Ricardo – the main protagonist of the Ceará team.

After about 10 minutes of struggle, Ceará not only reorganized and balanced the match, but also became superior to the opponent. Grandpa even had a golden chance with Jhon Vásquez in the 16th minute, when Bruno Pacheco reached the bottom line and made the right cross for the striker, free from marking in the area, but the header stamped the post.

It was at 27, however, that a succession of events changed the course of the match in favor of Ceará. The first was in a corner taken by Vina in the head of Messias, who tested hard, but the ball again hit the post. On the rebound, Zé Roberto dominated and was taken down inside the area: penalty for Vovô.

Erick then took responsibility. In the charge, Cleiton defended, but Vina, in the spare, finished for the back of the nets. The goal, however, was disallowed by VAR due to an invasion of the area, both by the alvinegro player and also by Bragantino, causing a new hit. Erick, who had previously kicked in the goalkeeper’s left corner, changed the shot to the opposite side, but Cleiton saved it. Amid the euphoria of the home team, VAR identified that the Massa Bruta archer had advanced, invalidating the defense.

For the third time Ceará had the chance to convert the penalty. If with Erick it wasn’t working, Zé Roberto decided to charge. With class and tranquility, the striker kicked in the middle of the goal and, finally, opened the scoring of the duel.

As the match headed for a Grandpa triumph, VAR kicked in again. In the 54th minute, the referee was called to analyze a possible penalty committed by Messias on Nathan. After the review, the judge flagged the infraction. Faced with a lot of complaints from Ceará athletes, Luan Cândido charged, displaced João Ricardo and tied the match, which ended in 1 to 1.