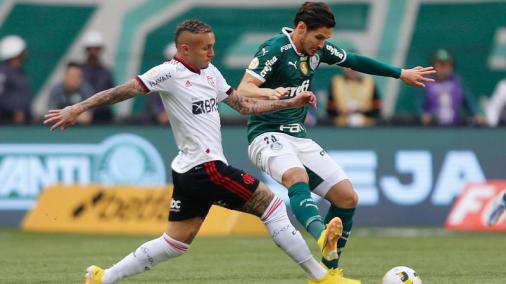 the game between Palmeiras vs Flamengo provided expressive numbers for Globo. According to information from “UOL”, last Sunday’s confrontation scored an average of 31 points for the broadcaster and registered the largest audience in the Brazilian Championship this year.

+ Title, Libertadores and relegation: see the chances of teams in the Brasileirão

Last Sunday’s numbers surpassed the audience of Atlético-MG x Flamengo on June 19. In Galo’s 2-0 victory over Rubro-Negro at Mineirão, Globo reached an average of 28 points.

Despite the expressive numbers of last Sunday, the record for football audience in Rio de Janeiro remains Flamengo x Atlético-MG for the second game of the round of 16 of the Copa do Brasil. Rubro-Negro’s 2-0 triumph over Galo at Maracanã recorded an average of 39 points.

With goals from Victor Hugo and Veiga, Palmeiras and Flamengo drew 1-1 at Allianz Parque. The confrontation of the Brazilian Championship had been much awaited by the public and provided good entertainment to football lovers.

Previous ‘Shy, dedicated, strong, golden girl’: find out who was Pietra Medeiros, futsal champion who died in SP | Sao Paulo
Next Nvidia: what is direct and indirect lighting?