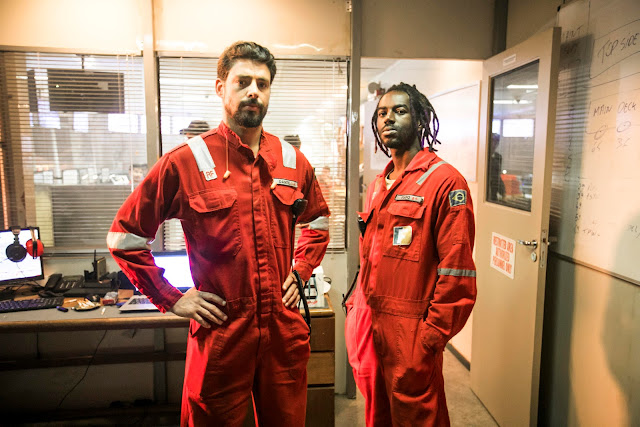 The second season of ‘iron island‘ begins after a three-year passage of time. Now Dante (Cauã Reymond) is a father. In fact, single father. After Bruno (Klebber Toledo) was arrested, he assumed the paternity of Maria (Alice Palmar), but life changed even after Leona (Sophie Charlotte) abandoned them. With his daughter, but without the presence of his brother and wife, the oil tanker is an increasingly lonely guy.

Júlia (Maria Casadevall) has left, Buda (Taumaturgo Ferreira) has died, and Dante’s love is increasingly PLT 137. Her obstinacy has increased the platform’s productivity, albeit at the expense of the team’s well-being. It will be precisely to try to control the tempers erupting on Iron Island that Olivia (Mariana Ximenes), the company’s psychiatrist, will be called to the vessel.

Olivia is an intense woman. Engaged with Diogo (Eriberto Leão), president of the Federativa, she tries not to expose their relationship so as not to interfere with the work. But everything changes when she meets Dante. Gradually, she becomes involved in his torments and continues, thus, trying to diminish the shadows of the ghosts of her past.

What she didn’t count on is that Dante’s recent past comes back with a vengeance. After three years away, and better resolved with her personal issues, Júlia returns at the request of her grandfather, João Bravo (Osmar Prado), who will receive a tribute aboard the PLT 137. romance with Dante.

On Júlia’s life on land, read: Commander Ramiro (Romulo Estrela). A combat diver in the Navy, he’s that kind of nice square guy, but reserved. Not by chance, the two meet in the middle of a chase. Despite being tough, little by little, they are letting their guard down, letting themselves be known and falling in love. But Ramiro also has a score to settle with his past.

Tell us a little about Julia. What was your biggest challenge as an actress in this production?

Júlia is a sensitive, fearless woman with many internal scars, who, in order to occupy certain positions of power at work, developed an apparently harsh and indifferent personality in the context of a masculine profession (Petroleum Engineering) and a sexist work environment. and full of risks – an oil platform. One of my biggest challenges in building this character was balancing her physical and psychological control, while preserving the spontaneity of her personality. Physical preparation was also a challenge, as it involved intense climbing classes; Júlia has a very close relationship with mountaineering and this practice brings her concentration, focus and physical strength.

What lessons do you carry with you after playing Julia?

The courage and authenticity of being who you are, without being more concerned with pleasing others than being aligned with my own truth.

What can TV Globo audiences expect from the second season of the series?

The second season takes a breather from the intensive daily life on the platform. Other plots and stories begin to develop and gain more prominence in the private life of each character on land, and this change brings new and important airs, which add to the plot.

What are your expectations for the premiere on open TV?

May the audience be able to reconnect with these characters and access the same affection and interest they had for them in the first season, may the trajectory of each one be revealed with originality and action for you.

Do you remember any behind-the-scenes trivia?

There are many memories, but among them one of the most sunny was the scene I recorded with the brilliant Tóia Ferraz [que interpreta Rocha], as soon as we resumed recording for the second season. The scene takes place in a bar; Rocha and Júlia are drinking and meeting again; that scene is full of improvisations, real laughter and a lot of joy for being there together again, two women artists, to tell that story.